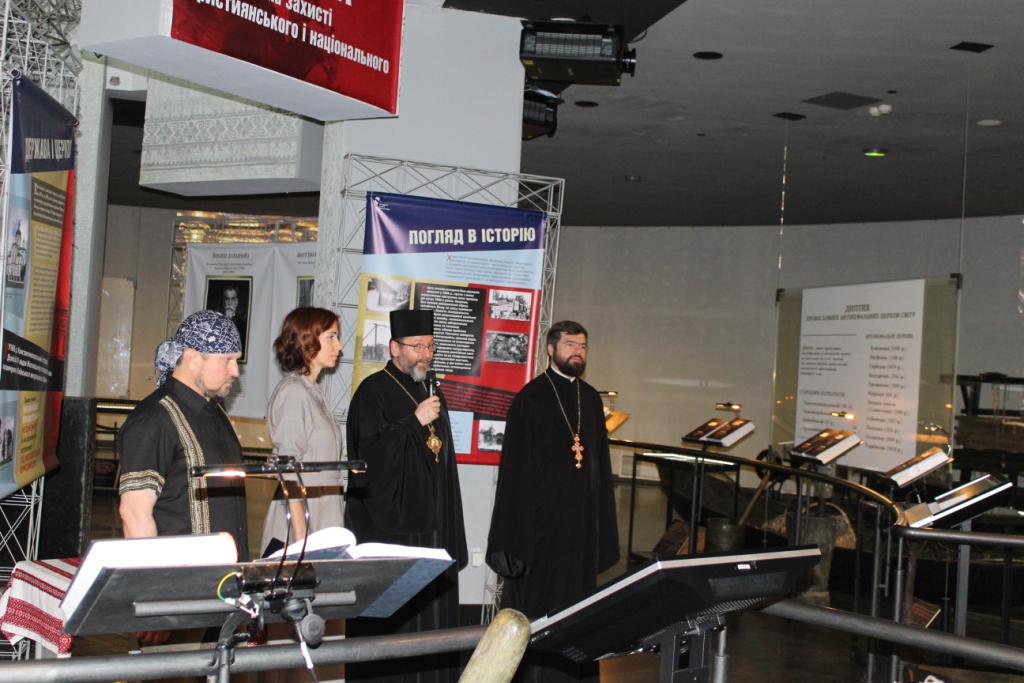 On May 17, 2019, to the International Museum Day, celebrated on May 18, and the Day of Remembrance of Political Repression Victims, which is this year celebrated on May 19, the National Museum “Holodomor Victims Memorial” presented the exhibition “The Church Defending the Christian and the National.” The exhibition was opened by the general director of the museum Olesia Stasiuk, who recalled the historical event on May 22, 1919, when the liturgy was first served in the Ukrainian language. It was served by Vasyl Lypkivskyi accompanied by a choir conducted by Mykola Leontovych at the St. Nicholas Military Cathedral in Kiev. Soon, the Bolsheviks killed Leontovych, destroyed the UAOC, killed Lipkivsky, and destroyed the St. Nicholas Cathedral.

The repression and persecution of the clergy continued together with the destruction and censorship of the Ukrainian intelligentsia, political and public figures, and the deportations of farmers outside Ukraine. The apogee of everything was the genocide-Holodomor of 1932–1933, during which more than 7 million Ukrainians were killed.

The Head and Father of the Ukrainian Greek Catholic Church, His Beatitude Sviatoslav (Shevchuk), thanked the museum for drawing attention to the history of the Ukrainian church and emphasized the peculiarity of this exhibition, which tells about the important role of the church in the life of the Ukrainian people during the absence of an independent state. It was the national church that continued to speak of independence –autocephaly – and that took on a vivid political function. That is why the repression and persecution of the clergy continued together with the repressions of the intellectuals and farmers.

His Beatitude Sviatoslav recalled the role of Metropolitan Andrey (Sheptytsky) in disclosing the information in Europe about the mass deaths of Ukrainians of the famine of 1932–1933 organized by the Soviet authorities.

The rector of the Kyiv Orthodox Theological Academy Archpriest Oleksandr Trofymliuk addressed the greetings to the guests. Father Oleksandr Trofymliuk thanked the Holodomor Victims Memorial for working on the exhibition, the purpose of which was to explain to the ordinary citizen the “price of the present state of the Ukrainian church,” and what she survived to become autocephalous.

The presentation was attended by the collector and friend of the museum, Dmytro Pirkl, who provided the rare editions on the history of the UAOC formation in the 1920–1940s from his private collection for this exhibition. These unique publications of the Soviet era were removed from all Ukrainian book collections and destroyed, so that there would be no mention of the Ukrainian church and its activities, nor any evidence that it was fully capable structure of intellectuals and philosophers who were ready to lead the nation forward.

We invite you to the museum to see the exhibition “The Church Defending the Christian and the National,” which tells the history of the Ukrainian Church until it received the autocephaly. Its destruction by the Bolsheviks is considered in the light of Raphael Lemkin’s conception of genocide of the Ukrainian nation. The struggle ways of preserving and reviving the Ukrainian Church are also shown.