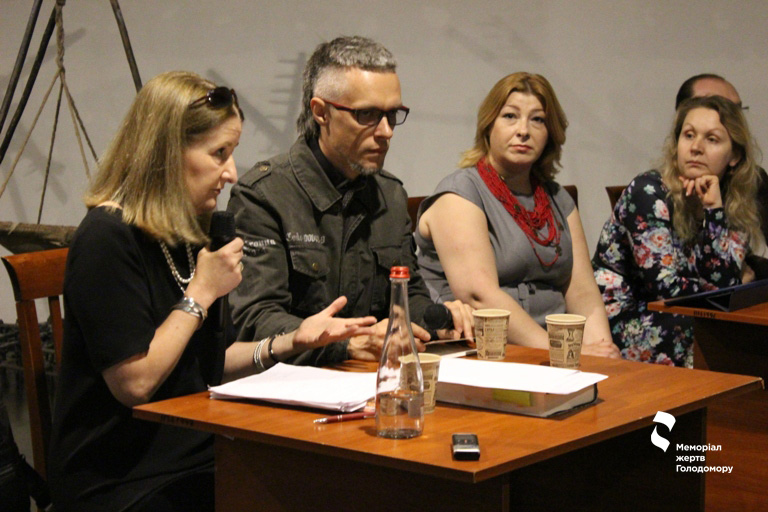 The psychological consequences of the Holodomor were discussed in the Museum

On June 3, 2018, in the Hall of Memory of the National Museum «Holodomor Victims Memorial», there was a discussion about the difficult but intrinsically important question: how does national traumas effects on the lives of contemporaries, and what the way of healing?

Participants of the discussion were: Cathy Caruth (historian, culturologist, author of the book «Listening to Trauma», Frank H. T. Rhodes Professor of Humane Letters at Cornell University (USA); Vitalii Klymchuk (Ph.D. in Psychological Sciences, leading researcher of the Institute of Social and Political Psychology of National Academy of Educational Sciences of Ukraine, Director of the Mental Health Solutions); Victoriya  Gorbunova (Ph.D. in Psychological Sciences, Head of the Department of Clinical Psychology (Ukrainian Catholic University). The discussion moderator was psychologist and journalist Larysa Voloshina.

It was the first visit by Cathy Caruth to Holodomor Victims Memorial. Therefore, the historian began a conversation with her own impressions and sensations that arose when she crossed the threshold of the museum: «I felt hunger, although I had breakfast». Preparing for the discussion, Cathy reviewed several documentaries about the Holodomor. She was interested in a video where women talked about the fact that older relatives began a telephone conversation with their children from the words: «Have you eaten?». Children do not understand why. According to Cathy’s view, this habit is the first manifestation of trauma in the public consciousness since the Holodomor. This reaction is not always conscious, especially if it occurs in people who do not have a direct relationship to Holodomor. It appears, first of all, because of a long silence and a ban on talking about the Holodomor. This habit: «Have you eaten?»  is a signal that the trauma wants to be embedded in the history of the country.

Therefore, the general purpose of collecting verbal testimonies of survivors is not only the transfer of historical facts but also the establishment of dialogue between those who speak and those who did not want to hear. The testimony of people is a historical and communicative bridge between Ukrainian society and those who survived during the Holodomor.

Developing this theme, Vitalii Klymchuk and Viсtoriya Gorbunova talked about their own project «Holodomor 33: to break the silence», focusing on how the idea to research the psychological effects of the Holodomor appeared. In connection with the emergence of a large amount of information on the history of the genocide of Ukrainians, many fantasies and thoughts of pseudo-scientists have appeared on this topic. The spouses of psychotherapists saw undeniable consequences of the Holodomor for Ukrainians. The question was: are there realistic mechanisms for transferring these effects from generation to generation? In some cases, the effects gradually disappear and people live a happy life. And in others – they continue to influence: people live but feel that something is happening wrong. One of the tasks of this project was to discover what exactly can be transmitted through generations.

Today there are many epigenetic studies that suggest that some changes in the nervous system are inherited, but this is not the subject of psychological research. In the case of the Holodomor, at least three things can be investigated: 1) presence or absence in a territory of Holodomor, 2) whether people refuse to honor the Holodomor, light candles to commemorate the victims and 3) explore changes in the outlook.

The researchers focused on avoiding: when in the family the memory of the Holodomor was silenced. They found the difference between people from the western regions of Ukraine and people from areas where the Holodomor was. If we talk about mentioning and not mentioning, the results of the survey showed that those people whose families were suffering from genocide were not the most speaking. If there were deaths in the families of relatives or neighbors – they say more often. Psychotherapists explain this by the degree of pain: in such cases, it is lower than in the first.

To sum up, the researchers emphasized that the more families talk about the Holodomor, the more often members of this family commemorate the victims of the Holodomor on a Memorable Day and attend sorrowful events. 70% of the participants of the research, whose families have been silenced by this topic, do not attend events dedicated to honoring the memory of Holodomor victims. 30% of people think that those who were lazy and did not want to work were suffered by the Holodomor. It is a terrible percentage, in fact. About 6% of the polled do not know at all whether their relatives lived in the territory where the genocide took place. 18% of people believe that the Holodomor is fake. It is not worth talking about now because hunger was everywhere.

An important fact that greatly distinguishes the Holodomor from other genocides is that it was impossible to speak about what happened. This caused distortion of memory and explains the results of the study.

Cathy Caruth had a question to Ukrainian colleagues regarding a testimony of the war on the Donbass: «What language do these witnesses testify to? If someone speaks Russian, and others in Ukrainian, does this not create a barrier?»

Vitalii Klymchuk replied that, in fact, the language is not a barrier for the victims of the war on the Donbass. The barrier creates a value of the witnesses.

While discussing the issue of survival during the years of genocide, Vitalii Klymchuk said that Ukrainians needed to be separated for surviving: it was necessary to hide stocks of food for their families. The psychotherapist calls it a «lock up» strategy, and Ukrainians inherited it. This is not catastrophic, but we have to work on it.

Moderator Larysa Voloshina asked all the participants about the following: «Is it necessary today to put on the discussion the question of who and how survived? Is it necessary right now?».

According to Vitalii Klymchuk’s view, the process of studying the history of the Holodomor as a whole and the issue of survival must take place in parallel: «We have a lot of information about the Holodomor, but this information is «about». However, the Holodomor is a living story. What we talk about the Holodomor is a reminder, and every person should do the main job: to think, to find out, to search and to read the testimony. Perhaps, they can hate in some way their ancestors or forgive them later, and only in this way is dignity really obtained. Through the truth».

Victoriya Gorbunova added that it is necessary to know the full truth. There can be no partial truth. It is about the executioners and the victims. The families, in which there is a secret, can not be completely happy until family members talk about this secret. Therefore, the main rule is to build a narrative of truth in all details: from the moment when there was no traumatic event until it was gone. And helping a person to understand everything and change the meaning that she has given to this horrible events. The researcher also described the tragedy of the Holodomor in his own family. Among her relatives were people who responsible for organizing the Holodomor, also were victims of the crime of genocide. Actually, this is a problem, why it’s hard to talk about the Holodomor.

The cultologist Cathy Caruth asked the psychotherapists’ opinion about the joint meetings of people who survived the Holodomor and people who have experienced other tragedies in Ukraine: «Sometimes you start realizing your past only when you hear about something like this from others». Victoriya replied that during the study they had such an opinion. After all, in the context of a dialogue, it is important to do some things: see how other people overcome the trauma; give people the opportunity not to feel lonely, to understand that there are other people with similar experiences.

According to Vitalii Klymchuk’s view, collective trauma consists of personal histories. The collective trauma is more abstract, which happened somewhere and once. It concerns everyone and no one specifically. Only personal stories are the path to healing.

Cathy Caruth summed up this thesis based on the experiences of other peoples: «The collective consequences of trauma are observed in many cases of genocide, crimes against a group of people, disasters. For example, victims do not want to talk about trauma. It means that you are in a community which makes you silent. Therefore, the process of recognition and awareness should take place collectively. Individual stories are very important».

Cathy gave an interesting example from the history of Chornobyl catastrophe. She recently learned the story of one man among the liquidators of the Chornobyl accident. He recalled how he was suddenly summoned to an unknown meeting. Moreover, it was done by the military structures. When he arrived at the gathering place, he was put in a carriage without any explanation. He was forced to work on the elimination of the accident. Cathy visited Chornobyl a day before the discussion. She was shown a film about the liquidators of the Chornobyl accident. The film was titled «The Battle of Chornobyl» and depicted all the liquidators as the heroes. But she remembered the story of the liquidator, who can not accept monuments devoted to the Chornobyl victims, honoring the heroes-liquidators. Because all this does not correspond to the experience that he had. She cited this example to illustrate the importance of testimony as a necessary element of holistic history.

While communicating with the visitors, the discussion participants summed up the meeting together: when we are discussing the Holodomor, it is very important not to lose the moment associated with optimism, which is called post-traumatic growth. Post-traumatic growth is a condition where a person experiences trauma, is updated and begins to live better than before trauma. Today, Ukrainians have an independent Ukraine. It means that for the sake of building our own state we should be united.