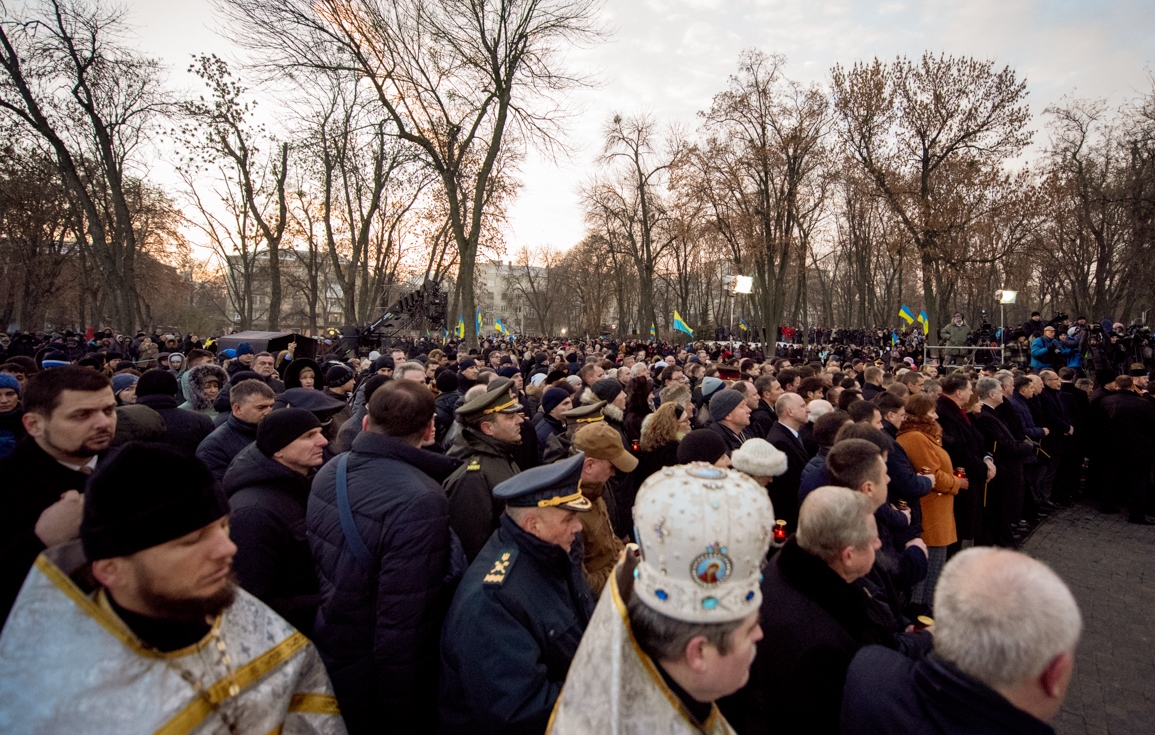 Commemorative events started with panahida for the victims of the Holodomor-genocide of the Ukrainian people, which was headed by the Most Holy Patriarch of Kyiv and All Rus-Ukraine Filaret.

After the memorial service, the President of Ukraine, Petro Poroshenko, spoke to the audience. In particular, the President said: “The genocide was very carefully planned. They wanted to solve the Ukrainian issue forever. For centuries it did not give rest to Russia, and, to be honest, it still does not give…”.

Concluding the speech, the President of Ukraine announced a nationwide minute of silence, after which the All-Ukrainian action “Let`s Light the Candle of Memory!” started.

Honoring memory of the Ukrainians killed by the genocide of 1930s, the President, the Head of Government and the Chairman of the Verkhovna Rada of Ukraine placed the “Candles of Eternal Memory” in front of the memorial sign “Candle of Memory”.

All over Ukraine, state flags were let down, and entertainment events were limited.

As part of the commemoration of the 85th anniversary of the Holodomor-Genocide, on Holodomor Remembrance Day, the world-famous Ukrainian band DakhaBrakha, with the support of the Oleksandr Dovzhenko National Center, performed the musical program “Zemlia” (by the same name as Alexander Dovzhenko’s film). Later, the ethnographic choir “Homin” joined the sorrowful events.

Also, all visitors to the museum were able to see the performance “The Wandering” in the Hall of Memory. The actors of the Kyiv Theater-Studio “MIF” during two weeks before the Holodomor Remembrance were telling about the fates of people who lived during Holodomor, in the public transport.

On this day, the Hall of Memory of Holodomor Victims Memorial Hall was opened until late at night. The guests of the Memorial lit 8 thousand candles in memory of 7 million innocently killed Ukrainians. 1200 commemorative breads were distributed to visitors to commemorate the millions of victims of genocide, who were not buried according to the Christian rites, who were to be remembered  for more than half a century.