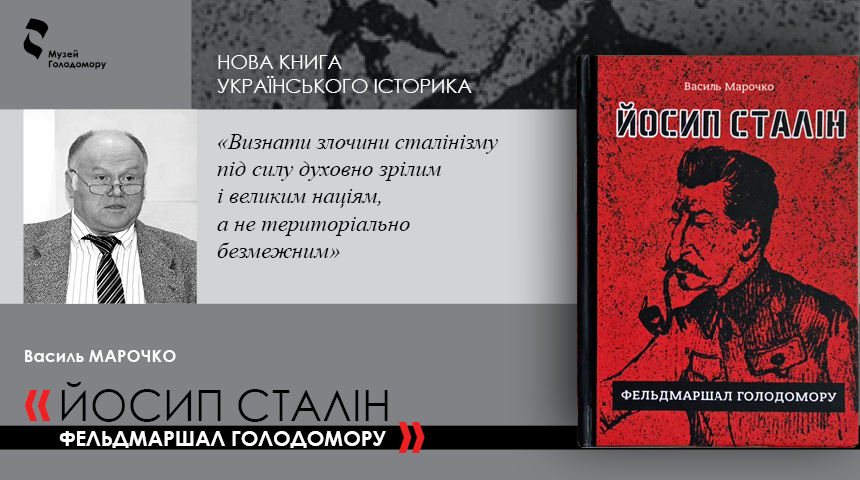 Field Marshal of the Holodomor’s ominous shadow, like a terrible ghost of 1933, flies over modern Russia. No cross, no memorial on the graves of his victims. Writing and telling the truth about the Holodomor is forbidden in Russia, but some Russian historians and political scientists are encouraged to lie about the tragic events of 1933 in Ukraine. In Stalin’s camps, shows are held overnight in the cells of political prisoners, and people feel comfortable in houses on the streets named after the executioners. No remorse, no apology to his own people. Obviously, only spiritually mature and great nations can recognize the crimes of Stalinism, not territorially unlimited ones.

Today we present the book Joseph Stalin — Field Marshal of the Holodomor, authored by Professor Vasyl Marochko. In his work, he highlights Stalin’s personal involvement in the organization of the Holodomor.

Vasyl Marochko is a Ukrainian historian, doctor of historical sciences, and an employee of the Holodomor Research Institute.

The work tells of Joseph Stalin, one of the most brutal dictators of the twentieth century, whose list of atrocities included the Holodomor genocide of 1932–1933. Grain procurements  in the Stalinist way meant conscious action with the intention of systematically depriving the peasants of grain and fodder crops. Stalin’s personal involvement in the initiation and development of the infamous “Five Ears of Grain Law”, his persistent support for the “black board” regime, the repressive mechanism of “natural fines”, the policy of isolating peasants in social reservations, etc.  prove his intent.

Some “historians” deny Stali’s role in the organization of the genocide of Ukrainians and call these events “local inflections.” Instead, Vasyl Marochko argues that the blame lies on the Secretary General himself, and that the lumpenized part of the village only obeyed his orders, “demonstrating the fanatical devotion of the Bolshevik stormtroopers.” The policy of “eliminating the kulaks as a class,” forced collectivization, indifference to the agony of the hungry peasantry, and other decisions show that the death sentence for Ukrainians was personally signed by Joseph Stalin. This crime has no statute of limitations and, despite attempts to glorify the “father of all nations” in modern Russia, it has already been condemned by the relentless Court of Time.

The book is a continuation of the author’s series of publications “Genocide of Ukrainians” and will soon be available for sale.

You can book a book and receive a notice of its sale by following the link. Estimated cost is 50 hryvnias.