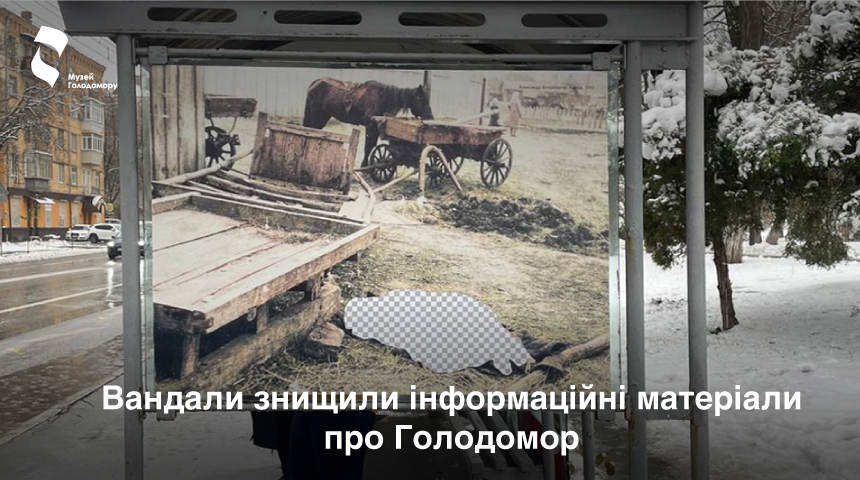 In Kyiv, on November 21, unknown people destroyed informational materials about the Holodomor at the “Church of the Savior on Berestov” public transport stop, located near the National Museum of the Holodomor-genocide.

The “Silhouettes of Memory” project, placed at the bus stop today, showed parallels between the Holodomor genocide and the genocide committed by the Putin regime in 2022. In particular, vandals tore down a poster with the following text:

“The criminal returns to the crime scene if he left it unnoticed. He is driven by the memory of successful violence and the feeling of his own impunity. The defeat of Ukraine in the war for independence of the last century turned out to be a defeat for everyone. It enabled the Russian Bolsheviks to implement the law of the victors — the law of terror and genocide of disobedient Ukrainians.

The memory of the Holodomor is the connecting link of Ukrainians’ memory of our community, which they seek to destroy. A community that remembers more, has a stronger sense of independence and is convinced of the right to that independence. Relying on the right of the strong, Russia continues its history. As long as this model is not defeated, its actions to destroy conquered peoples will be justified by Russian memory, tradition, and culture. Places for walks or relaxation in Ukrainian cities will be transformed into new places of crime. The visibility of the victims of the past is revealed in the repeated atrocities of the Russian war in Ukraine.”

Other project banners show photos taken by Austrian engineer Alexander Wienerberger, who was in Kharkiv at the height of the Holodomor. These unique photos are indisputable proof of the Holodomor genocide. Also at the stop are reproductions of photos from the Kharkiv region, taken in September 2022 by Iryna Rybakova, a press officer of the 93rd OMBr Kholodny Yar. These images show the destruction and damages that follows the Russian occupation.

The police are currently investigating this act of vandalism.

It will be recalled that in August 2020, vandals tried to destroy the sculpture “Bitter Memory of Childhood” on the territory of the National Museum of the Holodomor-genocide, and in October 2022, the occupiers dismantled the Holodomor monument in Mariupol.