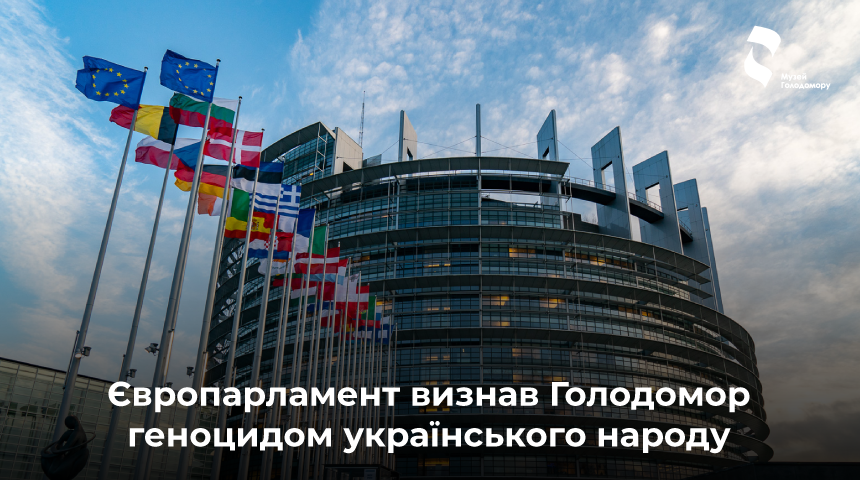 On Thursday, December 15, the European Parliament voted for a resolution recognizing the Holodomor of 1932-1933 as genocide of the Ukrainian people. 507 deputies voted “for”, and 12 voted – “against”.

The adopted resolution expresses solidarity with the people of Ukraine and honours the memory of millions of people who died as a result of the purposeful actions of the Stalinist regime to organize an artificial famine.

“Members of the European Parliament strongly condemn these actions, resulted in the death of millions of Ukrainians, and call on all countries to follow suit and recognise it as genocide,” the statement reads.

The resolution emphasizes that the whitewashing and glorification of the totalitarian Soviet regime and the revival of the cult of Soviet dictator Joseph Stalin have led to Russia being a state sponsor of terrorism today.

Condemning the current Russian regime for manipulating historical memory for the purpose of its own survival, the European Parliament called on the Russian Federation, as the main legal successor of the Soviet Union, to apologize for these crimes.

“I am grateful to the European Parliament for recognizing the Holodomor as genocide of the Ukrainian people. This decision restores historical justice and sends a strong signal to all other parliaments of the world. We continue to work on expanding the geography of recognition and expect new decisions soon,” Minister of Foreign Affairs of Ukraine, Dmytro Kuleba, tweeted.