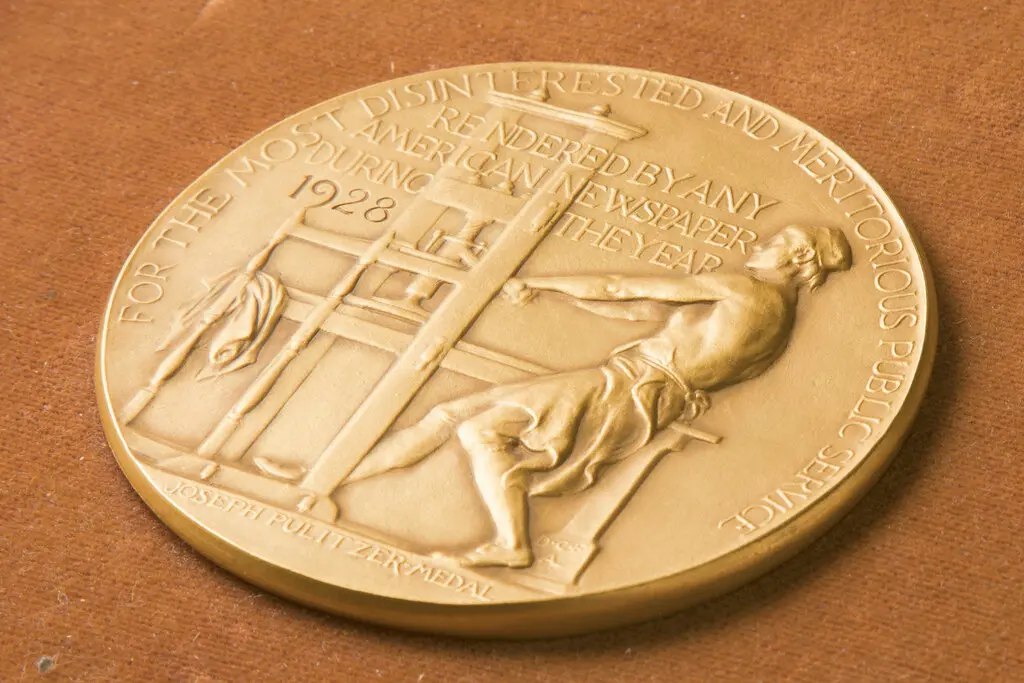 The Pulitzer Prize Council has awarded a special prize to Ukrainian journalists covering the Russian invasion of Ukraine. The corresponding statement of the Council was announced on Monday, May 9, by the coordinator of the Pulitzer Prize Marjorie Miller, Ukrinform reports.

A special prize was awarded for “courage, endurance, and commitment to truthful reporting of events.” Ukrainian journalists, the Award Council emphasize, despite bombardment, abductions, occupation, and even deaths in their ranks, they have persisted in their effort to provide an accurate picture of a terrible reality, doing honor to Ukraine and to journalists around the world.”

The Pulitzer Prize is one of the most prestigious awards in the field of literature, journalism, music, and theatre in the United States, founded by journalist and publisher Joseph Pulitzer. It has been awarded annually since 1917 May.

The awarding of the prize to Ukrainian journalists (we think it is well deserved!) Once again reminded of the story, which this year marks exactly 90 years.

Perhaps the most scandalous winner was the American journalist Walter Duranty, author of a series of reports from the Soviet Union. For these articles, which were published in the New York Times, the journalist received the Pulitzer Prize in 1932.

It will be recalled that Walter Duranty was a Moscow correspondent for The New York Times since 1921. The journalist’s collaboration with the party-Soviet nomenklatura lasted until the late 1930s. He carried out the personal instructions of Stalin and other high-ranking officials, regardless of journalistic standards.

Duranty was the first in the press to slander British journalist Gareth Jones, who was trying to tell the world the truth about the famine in Ukraine. On March 31, 1933, Duranty published an article in The New York Times entitled “Russians are hungry but are not dying of hunger,” convincing readers and citizens of the United States that in the USSR “there is no famine or starvation,” and deaths occurred from diseases caused by malnutrition. On August 23, 1933, he emphasized that journalists’ reports of famine in Russia were “an exaggeration or vicious propaganda,” although he also wrote about the “food shortage” that affected Ukraine, the Kuban, and the Volga region. In September 1933, Duranty visited areas of mass famine, probably with the permission of the Soviet leadership, and stated that using the word “famine” concerning the North Caucasus was completely inappropriate.

Remaining, according to Robert Conquest, a “pro-Soviet correspondent,” Duranty covered the Kremlin’s official opinion but was well aware of the real causes and consequences of the Holodomor.

“While Duranty so actively publicly denied the existence of hunger, in private conversations he openly acknowledged it. On September 26, 1933, in a private conversation with William Strange, a staff member of the British Embassy in Moscow, he said: “It is likely that last year 10 million people died in the USSR, directly or indirectly, from food shortages,” he wrote in a 2003 article. “The Tale of Two Journalists” by American researcher James Mace.

The delusions and manipulations that Duranty actively used are not professional standards of journalism. Therefore, when the topic of the Holodomor in Ukraine was tabooed, the question arose of revoking the high award given to the journalist.

The first public initiative to deprive Walter Duranty of the award came in 1990. It was then that the American writer and historian Sally Taylor published Duranty’s biography of Stalin’s Apologist. In response, The New York Times commissioned its international journalist, Carl Meyer, to analyse Duranty’s reports. Meyer read them and concluded that they were “some of the worst reports published in this newspaper.” Allegedly, Duranty dedicated his work to the cult of Stalin, ignoring his crimes. However, the Pulitzer Prize then decided to keep the award for the journalist.

On June 24, 2003, the Pulitzer Committee received a letter from Dr. Margaret Siriol Colley and her son, Nigel Linson Colley, from Bramcote, Notts, UK. This lady is the niece of Gareth Jones, the same one who was not afraid to tell the whole world the truth about what he saw in Ukraine in the spring of 1933. But the truth cost the British journalist a professional reputation, and probably even a life – Gareth Jones died under mysterious circumstances in China in 1935 (he was shot three times).

In their letter, Jones’ relatives demanded that the Pulitzer Committee cancel the Duranty Prize, which not only wrote a lie about the Soviet Union but also discredited a British colleague for trying to do his job honestly.

That same year, the Ukrainian-Canadian Association for Civil Liberties and Ukrainian World Congress, with the support of other leading Ukrainian diaspora organizations, organized a campaign to reconsider the Pulitzer Prize for Walter Duranty. James Mace also personally joined the initiative, sending his article “A Tale of Two Journalists” to the Prize Board. Ukrainian scientists, public organizations, and ordinary Ukrainians joined the initiative.

However, the Pulitzer Prize commission concluded that “there was no clear and convincing evidence of deliberate deception” to remove Walter Duranty from the list of Pulitzer Prize winners. According to the statement of the Council, “However, a Pulitzer Prize for reporting is awarded not for the author’s body of work or for the author’s character but for the specific pieces entered in the competition. Therefore, the board focused its attention on the 13 articles that actually won the prize, articles written and published during 1931.” That is, materials about the famine in Ukraine were published after the award ceremony. So they decided not to withdraw the award.

However, the Ukrainian public continued to struggle. On November 22, 2007, a protest took place on the European Square in Kyiv, demanding that Duranty be deprived of his prize. But Ukrainians were not heard again.

Later, in 2018, another attempt was made to cancel the award: that time the US Committee for the Recognition of the Holodomor in Ukraine as Genocide sent a letter to the Pulitzer Prize Council asking it to meet and discuss the Duranty situation. They replied that they “study materials and think.”

In March 2021, the US Committee launched another campaign to cancel the Duranty Prize, which also launched a petition to involve as many people as possible in the process. The collection of signatures is still ongoing. You can join the petition here.