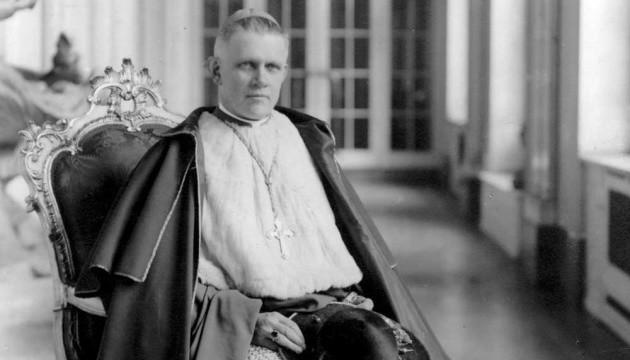 A Memorial Plaque to Cardinal Innitzer to Be Unveiled in Vienna

A memorial plaque will be unveiled at the Archbishop’s Palace in Vienna on November 12 to commemorate the assistance of the Archbishop of Vienna, Cardinal Theodore Innitzer to the victims of the Holodomor, Ukrinform reports.

“On November 12, at the invitation of the Archbishop of Vienna, Cardinal Christophe Schönborn, a solemn academy will be held to commemorate Cardinal Theodor Innitzer and his role in helping the victims of the Holodomor in 1932–1933. In 1933, Cardinal Innizer was one of the few who actively raised his voice in defense of the victims of the Holodomor, not only in words but also in actions, creating an international and inter-denominational organization to assist the victims of the famine,” the Vicar General of the Oriental for All Faithful Catholic Church in Austria, Father Yurii Kolas said.

The ceremony, which will start at 2.30 pm at the “Club Stefanplatz 4”, will be attended by representatives of Christian churches, the Jewish community of Vienna and secular authorities. The Greater Sviatoslav (Shevchuk), the head of the UGCC, will also make a welcome address, along with Cardinal Schönborn and Rabbi Vienna. An official from the Ukrainian authorities is still unknown.

Also, a memorial plaque on Theodor Innitzer’s aid to the Holodomor victims wil be unveiled on November 12. According to the personal decision of Cardinal Schönborn, it will be placed in a place of honor – in the premises of the Archbishop’s Palace at the main entrance.

As Father Yurii Kolas reported, the plaque is made of stone and has a round shape, which resembles a millstone. Its text will address the call of Cardinal Theodore Innitzer on October 16, 1933, to assist the victims of the 1932–1933 Holodomor and to establish, on his initiative, an “Interfaith and International Committee to Help the Territories of the Soviet Union Suffering from Hunger”. The board will also contain the number “163”, which literally means the approximate number of grains in 5 heads of grain, and in a deeper sense, the cost of human life (according to the so-called “Law on Five Heads of Grain”). The designer of the commemorative plaque was the Ukrainian architect Rostyslav Bortnyk, author of the art project “163”, dedicated to the Holodomor.

However, it is important that the German-language text of the board mentions the words “Hungermord” and “Holodomor” as a clear testimony to the artificial nature of famine organized by the Soviet regime. The fact is that various historians have been involved in writing it, and some of them have at some stage been suggested to use the Soviet definition of what was known as a “natural disaster” instead of “Hungerkatastrophe”.

“And the great credit, both in the very opening of the board and the mention on it of the word ‘Holodomor’, belongs to Cardinal Kristof Schönborn. After long discussions and caution from some historians, he personally insisted that the word be mentioned and carved on stone,” Father Yurii Kolasa said.