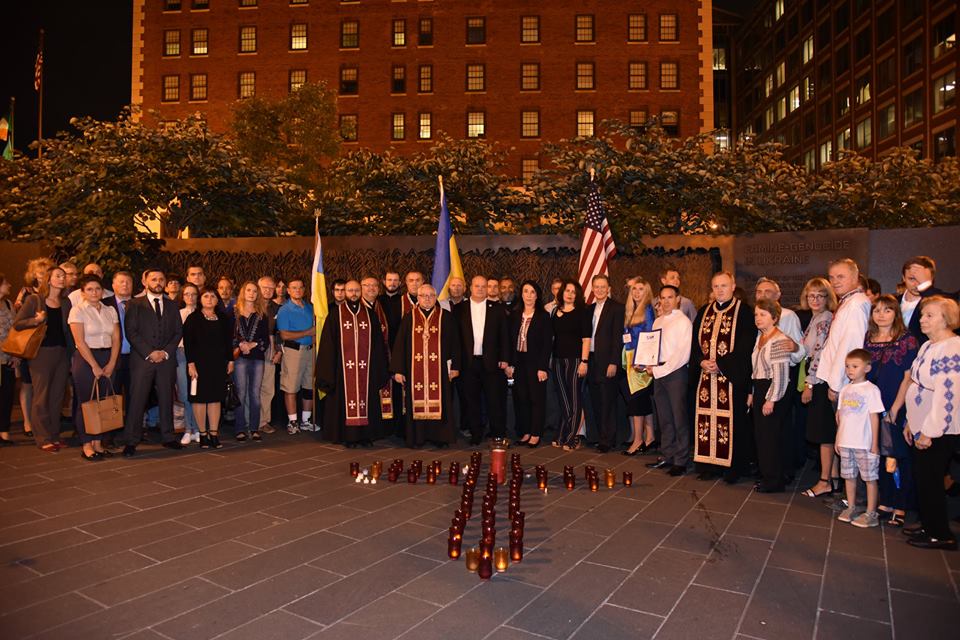 Action "Lets light a candle of memory" in Washington

The Ukrainian Embassy in the US, the US National Committee for the Holodomor as the genocide recognition and the Ukrainians of the Great Washington joined the international action “Let’s light a candle of memory!”, dedicated to the 85th anniversary of the Holodomor-Genocide in Ukraine, the press service of the Ukrainian Embassy in the United States reports.
“The event began with a joint prayer of the priests of Ukrainian churches for Ukraine, after which Ambassador of Ukraine to the United States Valery Chaly with his wife Lyudmila Mazuka, Deputy Assistant Secretary of State for Europe and Eurasia George Kent with his wife Velidoy Kent, Chairman of the US National Committee for the Holodomor as a Genocide Mikhail Savikh, architect Larisa Kurilas and priests of Ukrainian churches in the United States laid the symbolic bunches of wheat to the victims of the Holodomor-Genocide,” the statement states.
Valery Chaly on behalf of the President of Ukraine Petro Poroshenko congratulated the American Ukrainians on the unanimous decision of the US Senate to adopt a bipartisan resolution in which the 1932-1933 Holodomor was recognized as a genocide of the Ukrainian people and thanked the co-chairmen of the Ukrainian Senate Coca-Cola Robert Portman and Richard Durbin for their leading role in the adoption of this historical document.
Greeting were also made by the Deputy Assistant Secretary of State for European and Eurasian Affairs George Kent and the Chairman of the United States National Committee on the Holodomor as a Genocide Mikhail Savyk.
Representative of the American-Ukrainian Activists NGO volunteer Ilona Dohffler read the names of 85 children from the Starobelsky and Trinity districts of Luhansk Oblast, who perished during the 1932-33 Holodomor genocide in Ukraine.
The event ended with the composition “Candle” performed by the Ukrainian choir “Sing Life”.
Together with the Embassy of Ukraine in the USA, the ceremonies in the framework of the international action “Let’s light the memory of memory!” are being conducted by Ukrainian communities of Philadelphia (Pennsylvania), Passeik (New Jersey), Vippany (New Jersey), Boston (Mass.), South Bound Brooks Consistory of the Ukrainian Orthodox Church of the USA). On October 2-3, the ceremony was held with the participation of Ukrainians mm. Hartford (Connecticut), Albany (New York), Kerkhonkson (New York), Syracuse (New York), Joncres (New York), Miami (Florida) and Seattle (Washington).