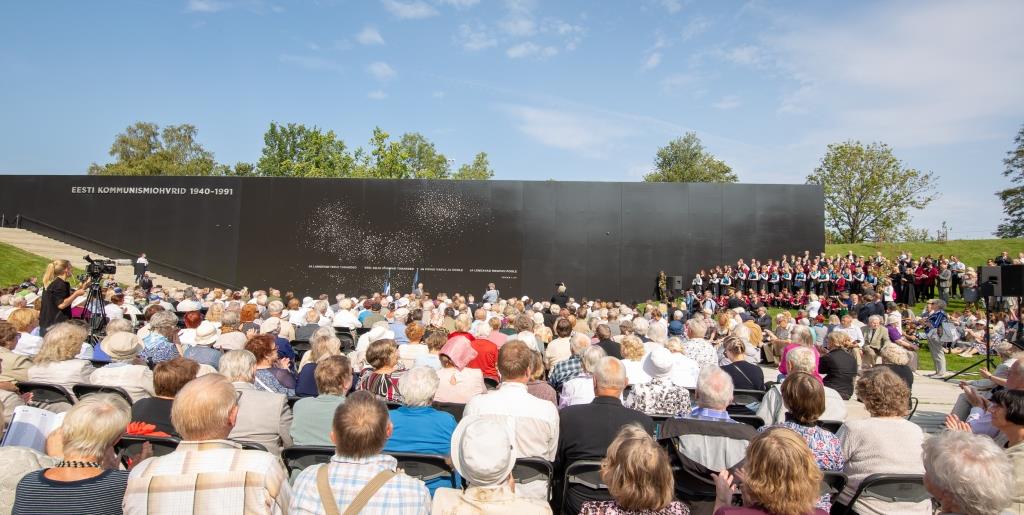 Estonia opens 30,000 sqm memorial in remembrance of victims of communism

On 23 August, the European Day of Remembrance for victims of all totalitarian and authoritarian regimes, a 30,000 square meter memorial was opened in Tallinn with more than 22,000 names of Estonia’s victims of communism. On the same day a high-level international conference “Utopia unachieved despite millions victimised? Communist crimes and European memory” was held in Tallinn.

The memorial commemorating Estonia’s victims of communism is dedicated to all Estonian people who suffered under the terror inflicted by the Soviet Union. The names of over 22,000 people who never returned home are inscribed on the memorial’s name plaques. They were murdered or died due to inhumane living conditions in imprisonment or forced resettlement and the remains of many of them are in unnamed graves in unknown locations.

At the memorial opening Kersti Kaljulaid, the President of the Republic of Estonia said: “Still, there are those who justify totalitarian ideologies on various pretexts, and say that ideally one or the other is actually noble, only implementation has failed so far. But every totalitarian ideology is by its nature an enemy of freedom, and we know its high price from our own historical experience.”

“Democratic countries should stand for the fact that hatred will never lead the decisions of anyone. We need to think about maintaining and protecting democracy and European moral values – citizens’ rights and freedoms – from all forms of populism and extremism. Only then we can be sure about the future of our children and grandchildren,” the President of the Republic said.

The opening of the Memorial was followed by the high-level conference “Utopia unachieved despite millions victimised? Communist crimes and European memory”, organized by the Estonian Institute of Historical Memory, supported by the Estonian Ministry of Justice and the Embassy of Germany to Estonia.

Richard Overy, the Professor of History at the University of Exeter emphasized in his keynote speech that despite that Europe is free from communist regimes, the situation in the world is far from peaceful. “Few Europeans seem willing to acknowledge that China is a single-party authoritarian state that abuses human rights and denies freedom of expression or association to around one-quarter of the world’s population.” Through this example Mr Overy emphasized the fact that freedom can not be taken for granted. “Historical memory is critical and it must be kept alive not only by the dedicated work of scholars who expose the gap between totalitarian rhetoric and the brutal reality, but by wider public engagement with the memory of victimhood through programmes of education, public events and sites of remembrance,” said Mr. Overy.

Nikita Petrov, the Vice-Chairman of the Board of Memorial`s Scientific Research Centre (Russia) agreed with the necessity of a  common culture of remembrance in Europe. “It is necessary to create an international court for communist crimes. To talk widely about those crimes through the education system,” said Mr. Petrov. He emphasized that it has to be remembered that communist ideologies are based on fear and violence.

On the same say, at the invitation of Minister of Justice Urmas Reinsalu, the government representatives of European Union countries gathered in Tallinn to adopt a joint statement to commemorate the victims of communism and to support the initiation of the Estonian government to establish an international museum of the crimes of communism in Tallinn.

“It is noteworthy that the representatives of eight countries demand the continuation of investigations into communism’s crimes. It is clear that investigating totalitarian regimes and acknowledging their hostility is a shared responsibility of Europe. Together, we can protect the achieved freedom, democracy, and human rights against both today’s and future threats that arise from hostile ideologies,” Reinsalu said.

The government representatives of the European Union member states, who were present at the meeting, also invited the governments of other countries to express their respect for all those who fell victim to the political terror of the totalitarian regimes with the joint statement. At the same time, the participants of the meeting expressed their support for the initiative of the Estonian government to establish an international museum for the victims of communism in Tallinn. The representatives of the ministries of justice and the ministries of foreign affairs in Estonia, Latvia, Lithuania, Romania, Croatia, Czech Republic, Poland and Hungary joined the joint statement.

Between 1940 and 1991 Estonia lost one of every five persons from its population of slightly over one million, of whom more than 75,000 were murdered, imprisoned or deported. The murder, imprisonment or deportation of tens of thousands of Estonian people in the 1940s and 1950s constitutes genocide, war crimes and crimes against humanity with no statutory limitation.

On 18 June 2002, the Estonian Parliament declared the Soviet Union’s communist regime, the organs that violently implemented it, and the actions of those organs to be criminal. In 2009, the European Parliament called in a resolution to make 23 August the Day of Remembrance of Victims of all Totalitarian and Authoritarian Regimes.

The European Parliament resolution from 2009, which the OSCE Vienna Declaration supported, appealed to Europeans to remember millions of victims of authoritarian and totalitarian regimes, and thereby to promote democratic values.

This date also marks the 1939 pact between Hitler and Stalin, and the signing of its secret additional protocols. In 1939 and 1940, Nazi Germany and the Communist Soviet Union occupied the countries and territories assigned to their respective spheres of influence and established regimes of terror that were hostile towards humanity.