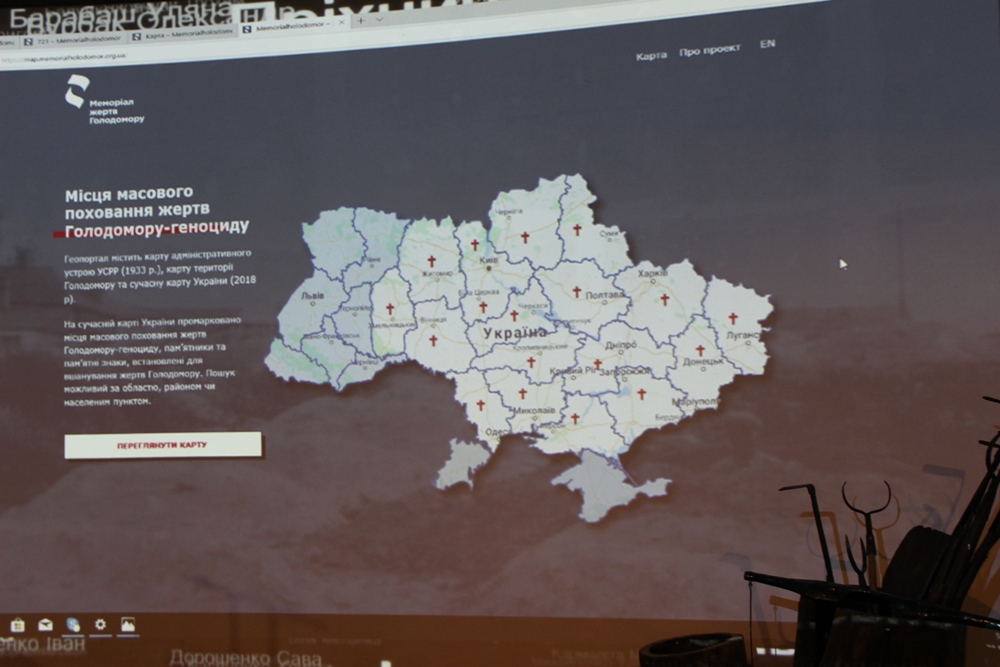 GIS "Places of mass burial of Holodomor victims" was presented

November 22, 2018, to the 85th anniversary of Holodomor-Genocide, the National Museum “Holodomor Victims Memorial” presented a geo-informational system “Places of mass burial of Holodomor victims“. The project was created with the support of the Ukrainian Cultural Foundation.

Between 1932 and 1933 Ukraine lost from 7 to 10 million people. Whole families were dying, villages were abandoned. Death was not perceived as an extraordinary phenomenon. Exhausted by a long starvation, the peasants had not the strength to bury the members of their families. The Soviet authorities, in order to conceal the extent of death and to prevent the spreading of infections, organized the picking up and burial of corpses of those killed by starvation. For this purpose, large burial pits were created in local cemeteries. Also, the corpses, found on the streets, were brought to the suburban of the cities to the gullies or other natural ditches. Often the bodies of the dead were buried in secret, at night, without coffins, with no traditional rituals. At the mass graves no memorial signs were installed.

The National Museum “Holodomor Victims Memorial” has created a portal on which the information about the graves of the victims of the 1932-1933 genocid is visualized and attached to the map.

Director General of the museum Olesia Stasiuk said: “We have found over 900 mass burial places. Part of the material was in a criminal case No. 475 on the fact of committing the crime of genocide on the territory of Ukraine in 1932-1933 (857 graves). We were also helped by public figures, museums, professors and researchers who provided us with information from all over Ukraine.”

Holodomor eyewitnesses also helped to find the places of burial. Denying the fact of Holodomor in Ukraine, the occupational Communist regime was carefully hiding the places of mass burials of genocide victims. For this purpose, on the mass graves the city parks of entertainment were created, the enterprises were built, the roads were laid. The areas on the village cemeteries were covered by grass, because they were not attended to. However, the survivors always remembered about the location of these places. It was their memories and archival materials that formed the basis of the project informational base.

The director noted that the work on the search for places of mass grave continues, and everyone can help the museum in it, passing information on the Holodomor victims burials.

Curator of the project Julia Kotsur showed the structure of the resource: “On the map users can see the locations of the places of mass burial of Holodomor victims, the monuments and memorials installed in their honor. The data on the loss of genocide, archival materials and the memories about Holodomor in a specific Ukrainian settlement, are available too”.

You can get acquainted with the geo-information system on the official site of the museum.

Also, on November 22, with the participation of Natalya Mukhina, head of philatelic production department at “Ukrposhta”, a special ceremony of paying-off the envelope “Holodomor in Ukraine. 1932-1933” was held at the museum. The author of the envelope is Dmytro Burian. The number of edited copies of envelopes is 400 thousand. Today they were sealed in all mail offices. A special  ceremony of paying off the written correspondence also took place at the Main Post Office. Thus, information on the genocide of Ukrainians in 1932-1933, with the help of letters, will be spreading around the world.

In the end, Olesia Stasiuk presented a video devoted to the 85th anniversary of Holodomor-Genocide and thanked the authors of the video-studio of innovative technologies “Front Pictures”. The video is displayed in the Hall of Memory of the museum.