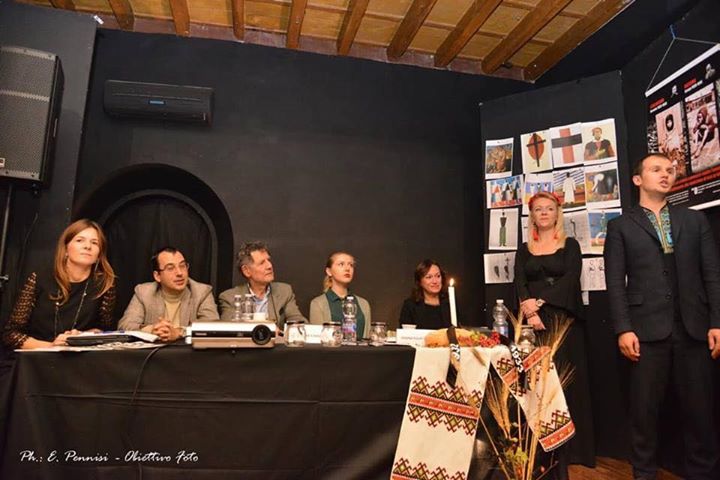 In Florence, the victims of the Holodomor were commemorated

The Ukrainian community of Florence hosted commemorative events to the 85th anniversary of the Holodomor on November 17, 2018. The events took place in the bookstore “Free Books” with the participation of Professor of the University of Pisa, Ettore Chinnell. An Italian historian who studies the history of the Holodomor, published the book “Ukraine. Forgotten genocide” in 2015. The speech of the professor was particularly interesting to the audience, because a very small part of Italian citizens know about the Holodomor. Many Italians discovered the story of the 1932-1933 Ukrainian genocide committed by the Soviet authorities for the first time.

Educational part of the event was supplemented with creative one. The members of the EKA Project band performed songs devoted to the memory of millions of victims of the Holodomor. The celebration continued with the revelation of the verse “Dinner”, which describes the last dinner of the Ukrainian family during the Holodomor. Presenters talked about fixing the Holodomor’s events in literature and art, recalling the novel by Vasyl Barka “The Yellow Prince” and the picture of Kazymyr Malevich “Where the sickle and the hammer, there is death and hunger”.

At present, Italy has not recognized the Holodomor as the genocide of the Ukrainian nation. However, Ukraine, in cooperation with the Ukrainian diaspora of Italy and individual Italian figures of science and culture, make every effort to raise awareness of the people of this country on the history of the Holodomor- genocide. In the long run, this will have a positive impact on the issue of recognition of the Holodomor at the state level.

We remind you that in September 2018, Italian artist and writer Sabatino Scia transferred a series of his paintings called “Holodomor. The Genocide of Ukrainians” to the National Museum “Holodomor Victims Memorial”. The works were exhibited in the museum during the fall.

Photos and information were provided by event organizers:

Honorary Consulate of Ukraine in Florence