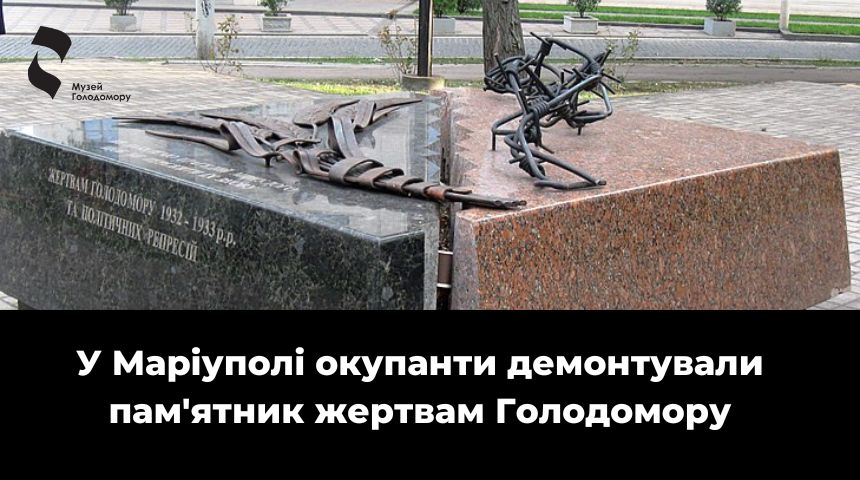 In Mariupol, the occupiers destroyed a monument to the Holodomor victims

On Wednesday, October 19, the Russian occupiers dismantled the memorial to the Holodomor victims installed in the centre of Mariupol.

The monument was dismantled using a truck crane.

A henchman of the Russian invaders, Artem Bobrovsky, commented to Russian propagandists that “the most affected by the famine of 1932-1933 was not Ukraine at all, and not Donbas at all, but Kazakhstan, the Volga region and the North Caucasus.” And Ukraine, according to the pseudo-historian, “stands in the penultimate place in terms of the number of affected population in the region.”

In turn, the lecturer at the Pryazovskyi State Technical University, Olha Shmachkova, has said that the people of Mariupol today have experienced terrible times, and we should not remind them of “the terrible”. Olha Shmachkova must have forgotten that those who do not remember their past are doomed to experience it again.

Dismantling the monument is not only a crime against Ukrainian cultural heritage but also a crime against the Ukrainian past. And a bright illustration for those who are still wondering: “What does this have to do with monuments?”

A memorial sign to the Holodomor victims in Mariupol was erected in 2004 in a small square on Universitetska Street, near the Drama Theatre, which was destroyed along with the people by the Russian invaders in the spring.

On a low, rectangular plinth made of black and red granite, divided into two parts, there was an image of an ear of grains tied with a ribbon and a barbed wire – a symbol of the Gulag. There was an inscription on the monument: “Let’s not forget the tragedies of the past, so as not to experience them again.”

The monument was erected in memory of the victims of the Holodomor and the political repressions of the communist totalitarian regime.