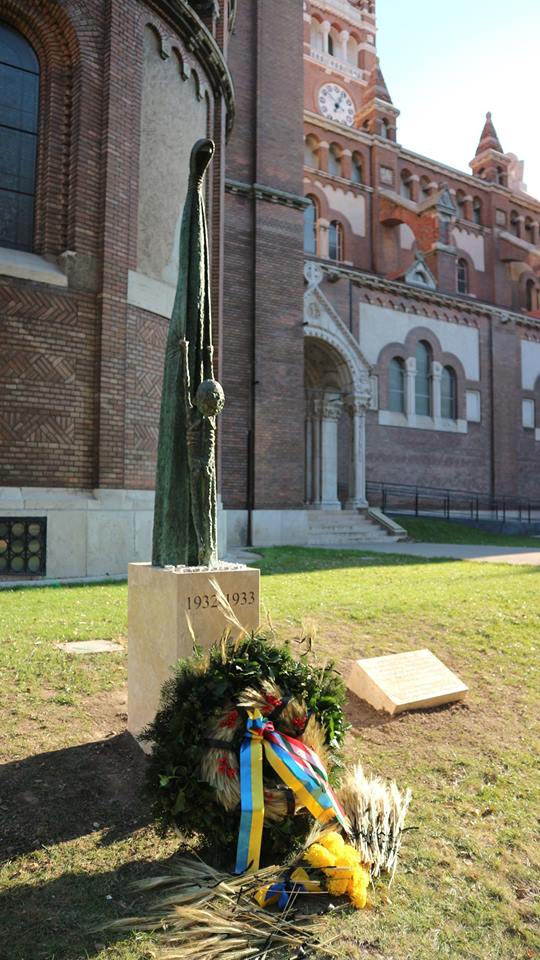 In the Hungarian city of Szeged, a monument to the Holodomor victims in Ukraine was opened

On November 16, 2018, a ceremonial opening of the monument to the Holodomor victims of 1932-33 in Ukraine was held in Szeged city. The event is timed to the 85th anniversary of Holodomor-Genocide, the press service of the Ukrainian Embassy in Hungary informs.

The monument is located in the center of the city of Szeged on Dom Square in a park of the central cathedral of Szeged, in the territory that belongs to the world cultural heritage. The author of the memorable sign is Bohdan Korzh (Uzhgorod). The monument is stamped: “To the 85th anniversary of Holodomor in Ukraine, organized by the Soviet authorities in 1932-33. Eternal memory to millions of the Ukrainian people – the innocent genocide victims! “

The monument was installed on the initiative of the Chongrad Abbey (Szeged), the Honorary Consulate of Ukraine in Szeged, and the Self-Government of Ukrainians in Szeged. Within the framework of the opening, Ambassador Extraordinary and Plenipotentiary of Ukraine in Hungary, Liubov Nepop, expressed gratitude to Hungary, whose parliament was the first in Europe, who recognized Holodomor as an act of genocide against the Ukrainian people. On behalf of the Ukrainian people she thanked A. Rovt – the Honorary Consul of Ukraine in Szeged, the Ukrainian community in Hungary, bishop of the Roman Catholic Church of Szeged-Chonhrad region for the assistance in opening of the monument. Ambassador called for solidarity with Ukraine in the issue of restoring territorial integrity and peace in Ukraine in countering Russian aggression.

Deputy Minister of Foreign Economy and Foreign Affairs, Parliamentary State Secretary Levente Madiar addressed the audience, and urged to remember this terrible tragedy not only of the Ukrainian people, but others too.  So that nothing like this could happen again in the future. The Honorary Consul of Ukraine in Szeged city, A. Rovt, and Head of Ukrainian Self-Government in Szeged, the Head of the Ukrainian Society of Szeged, Natalia Shaitosh- Zapotochnaya also addressed the guests.

A memorial sign to the Holodomor victims of 1932-33 in Ukraine was consecrated by Bishop Laslo Kish-Riho. A memorial service for innocent victims of Holodomor was held and ended with the ceremony of laying a joint wreath made from ears, from all participants of the event, as well as a minute of silence in memory of the innocent Holodomor victims. A concert-dirge was performed by the Honored Academic Transcarpathian Folk Choir.The hymns of Ukraine and Hungary were performed at the end of a solemn opening of the memorial sign.