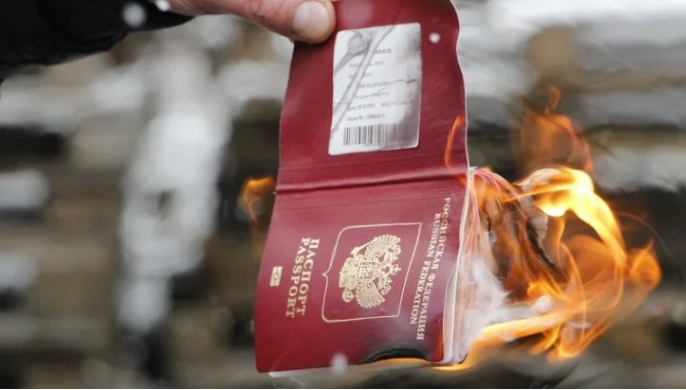 In the occupied territories, Ukrainians are forced to obtain Russian passports

In the temporarily occupied territories of Ukraine, the rashists continue the forced passporting of the Ukrainian population. Defence Intelligence of the Ministry of Defence of Ukraine reported it. People are just driven into a dead end: without a Russian passport, it is impossible to issue property rights or other important documents or to carry out business activities.

Thus, for the Melitopol residents and its surroundings, the occupiers made public the requirements for the “registration” of land shares. And people who still have a higher rent for land shares must change it to new ones. Anyone whose contract has expired must conclude a new contract based on the received Russian passport and following Russian legislation. If the term of the contract has expired and the owner has not appeared, the person will be deprived of the right to own land shares.

The occupiers also warned that from the beginning of September this year, the Ukrainian-style license plates on vehicles would be changed to temporary ones with subsequent re-registration, but only on the condition that the owner of the vehicle has a Russian passport!

At the same time, in the occupied territory of the Kherson region, the “minister of agrarian policy” illegally appointed by the invaders, O. Kovaliov, calls on agricultural producers to register their activities and pay “taxes” according to the legislation of the Russian Federation. Those who refuse, will be deprived of land ownership rights, and agribusiness owners will be expelled from the region.

And in Kamianske town, the occupation administration is carrying out measures to transfer the activities of local businesses to tax standards following the legislation of the Russian Federation. Business representatives and the self-employed population were given relevant letters. The main requirement for business activity is the presence of citizenship of the Russian Federation.