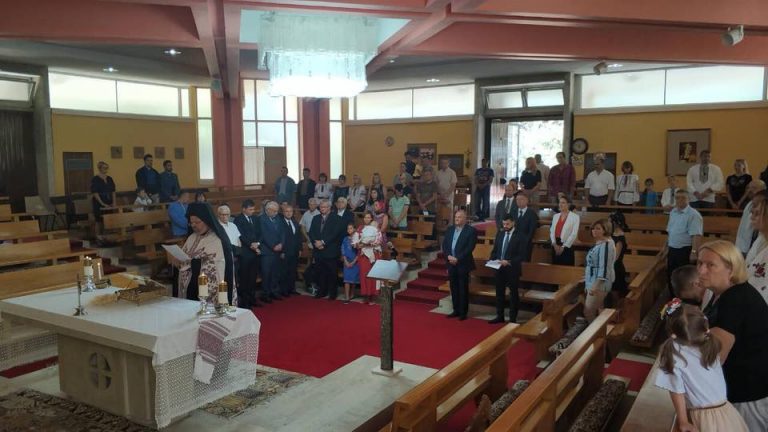 In Turkey the action "Let`s Light a Candle of Memory!" was held

On September 2, 2018, the Embassy of Ukraine in the Republic of Turkey and the Ukrainian community of Turkey joined the International Action dedicated to the 85th anniversary of the Holodomor “Let`s Light a Candle of Memory!”.

In his speech, he told the words of support and blessings to the Ukrainian people from the Head of the Church of the Constantinople: “With the blessing of Archbishop of Constantinople – New Rome and the Ecumenical Patriarch of His Holiness the Bartholomew, the mother church appeals to you to share with you the sadness, caused by the Holodomor of 1932-1933 – one of the greatest CRIMES of the twentieth century”,- the Archimandrite said to the audience.

He emphasized that this worship, conducted jointly with the local Ukrainian Orthodox community and the representatives of various nations in Ankara, is a manifestation of solidarity with Ukrainians throughout the world in prayerful remembrance of millions of Holodomor victims, who died as because of the artificially organized Soviet Communist regime of famine.

The ambassadors of Georgia, Lithuania and Malta, diplomats from the US Embassies, Poland and Finland, the representatives of the Ministry of Foreign Affairs of the Republic of Turkey, leaders of the Crimean Tatar community, as well as Turkish citizens and foreigners took part in this International Action.

The Ambassador of Ukraine in the Republic of Turkey Andriy Sibigha, referring to the participants of the event, noted that the most powerful and independent Ukrainian state is a guarantee of non-repetition of similar crimes in the future.

Upon completion of the memorial service, the participants of the event lit candles and commemorated the innocent victims of the Holodomor a minute of silence.

The participants also visited the “Killed by Famine“ thematic exhibition and received information brochures in the Turkish language about the Holodomor.

The thematic events within the International action “Let`s Light a Candle of Memory!” have also been held in Istanbul, Antalya, Marmaris, Izmir, Bursa, Kusadasi and Samsun.

To recall, on September 1, the action “Let`s Light a Candle of Memory!” started at the National Museum ” Holodomor Victims Memorial”.

Turkey was identified as the first country to have held the action “Let`s Light a Candle of Memory!”. The next candle of memory will be lit in Jordan.