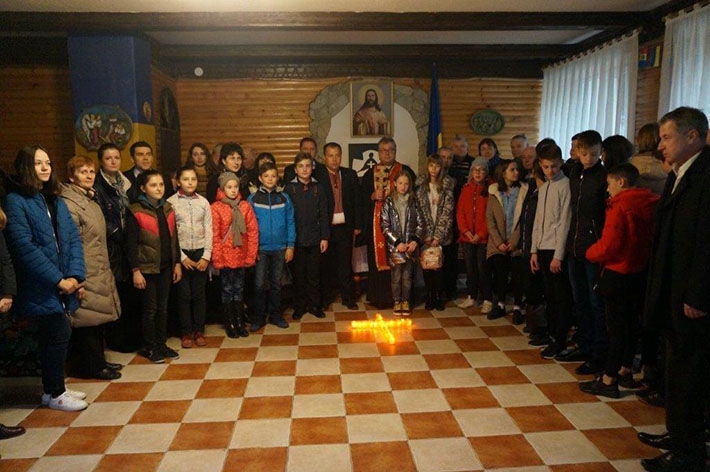 International Action "Let's Light a Candle of Memory!" in Moldova

On November 2, 2018, an International Action for commemoration the 85th anniversary of the Holodomor, “Let’s Light a Candle of Memory!” was held in the city of Beltsi (Republic of Moldova), the press service of the Ministry of Foreign Affairs of Ukraine reports.

The action was held at the Ukrainian House, with participation of employees of the Consulate of Ukraine in Beltsi, the representatives of the Union of Ukrainians in Moldova “Zapovit – Renaştere”, the students and teachers of the gymnasium with advanced teaching of the Ukrainian language number 9 (in the city of Beltsi), students and teachers of Alec Russo Beltsi State University and non-indifferent inhabitants of Beltsi.

During the speech, O. V. Yevdokymov, the Consul-General, drew attention to the reasons and consequences that caused one of the most terrible tragedies of our time. He encouraged younger generations to remember history in order to prevent a similar tragedy in the future.

Special attention was paid to the number of dead children who could not survive these tragic events, to the memory of which this year’s action is dedicated.

Within the framework of the event, a funeral service for the victims was held by the Roman Catholic parish priest Roman Popravka, the rector of the Ukrainian Greek Catholic community “The Blessed Virgin Mary”.

During the memorial service, the names of children from the millions of victims, who perished as a result of one of the greatest crimes in the history of humanity of the twentieth century, were read out.

The participants of the action honored the memory of innocent victims of the Holodomor with a minute of silence.

You can follow the 85-day campaign on the page “The 85th  anniversary of Holodomor”.