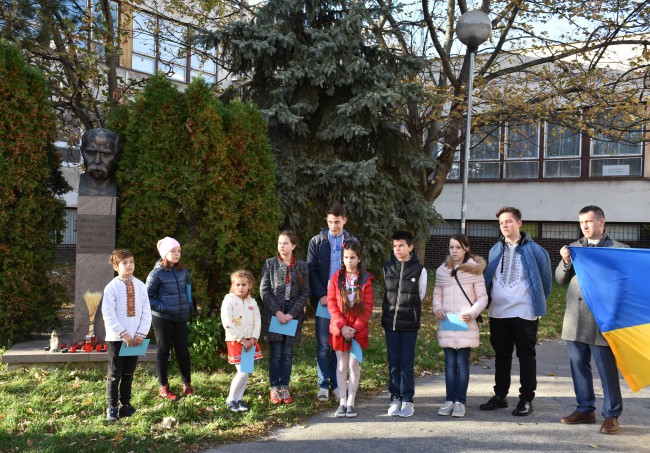 International Action "Let's Light a Candle of Memory!" in Slovakia

On October 31, 2018, Bratislava joined the International Action “Let’s Light a Candle of Memory!”, the press service of the Embassy of Ukraine in the Slovak Republic reports.

Employees of the Embassy of Ukraine, members of the Slovak-Ukrainian Society of Bratislava, the Taras Shevchenko Musical and Drama Ensemble, students of the Ukrainian school in Bratislava, representatives of the intelligentsia and the Ukrainian community of Slovakia joined the action,.

Ambassador of Ukraine Yurii Mushko told the audience about the purpose of holding the “Let’s Light a Candle of Memory!” Action, stressing that “Holodomor was one of the largest national catastrophes in modern Ukrainian history. We regard it as the most brutal crime of the communist regime against the Ukrainian people.”

The children of the Ukrainian school in Bratislava read out the names of the children who lived in the Kirovograd region and died of famine in 1932-1933.

By the minute of silence present people commemorated the dead.

During the event, children recited poems about Holodomor, including, for example, “Do you say there was no Holodomor?” by D. Bilous, and other poems.