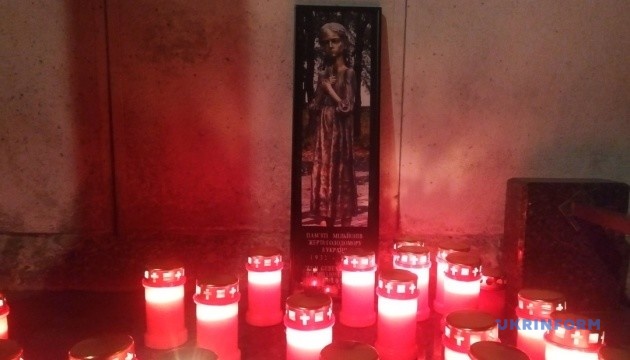 International action "Let's Light a Candle of Memory!" was held in Austria

On October 19, 2018, in the Ukrainian church of St. Barbara in the Austrian capital, Vienna, the Ukrainian community held an international event for the 85th anniversary of the Holodomor. After the memorial service, the participants of the action lit the candles in memory of 7 million Ukrainians, victims of the great genocide of the twentieth century, committed by the Soviet authorities. The priest Taras stressed, that all Ukrainians have a great responsibility for life: “We are responsible to live so, that the sacrifice of those who lost their lives was not in vain, that in this world there should be be many good things, not evil, that there should be life and not death, that everywhere should be love, not hatred”.

The event was attended by Ambassador of Ukraine to Austria Alexander Shcherba, architect Rostyslav Bortnyk, who in 2016 presented the project “163” in the National Museum “Holodomor Victims Memorial”, devoted to the topic of human losses of Ukraine from Holodomor.

We remind you that the International action “Let’s Light a Candle of Memory!”, initiated by the World Congress of Ukraine, and supported by the Ministry of Foreign Affairs of Ukraine, is held this year in 85 countries of the world. The action started in Ukraine on September 1, 2018 at the National Museum “Holodomor Victims Memorial” and is ending on November, 23 in Morocco.