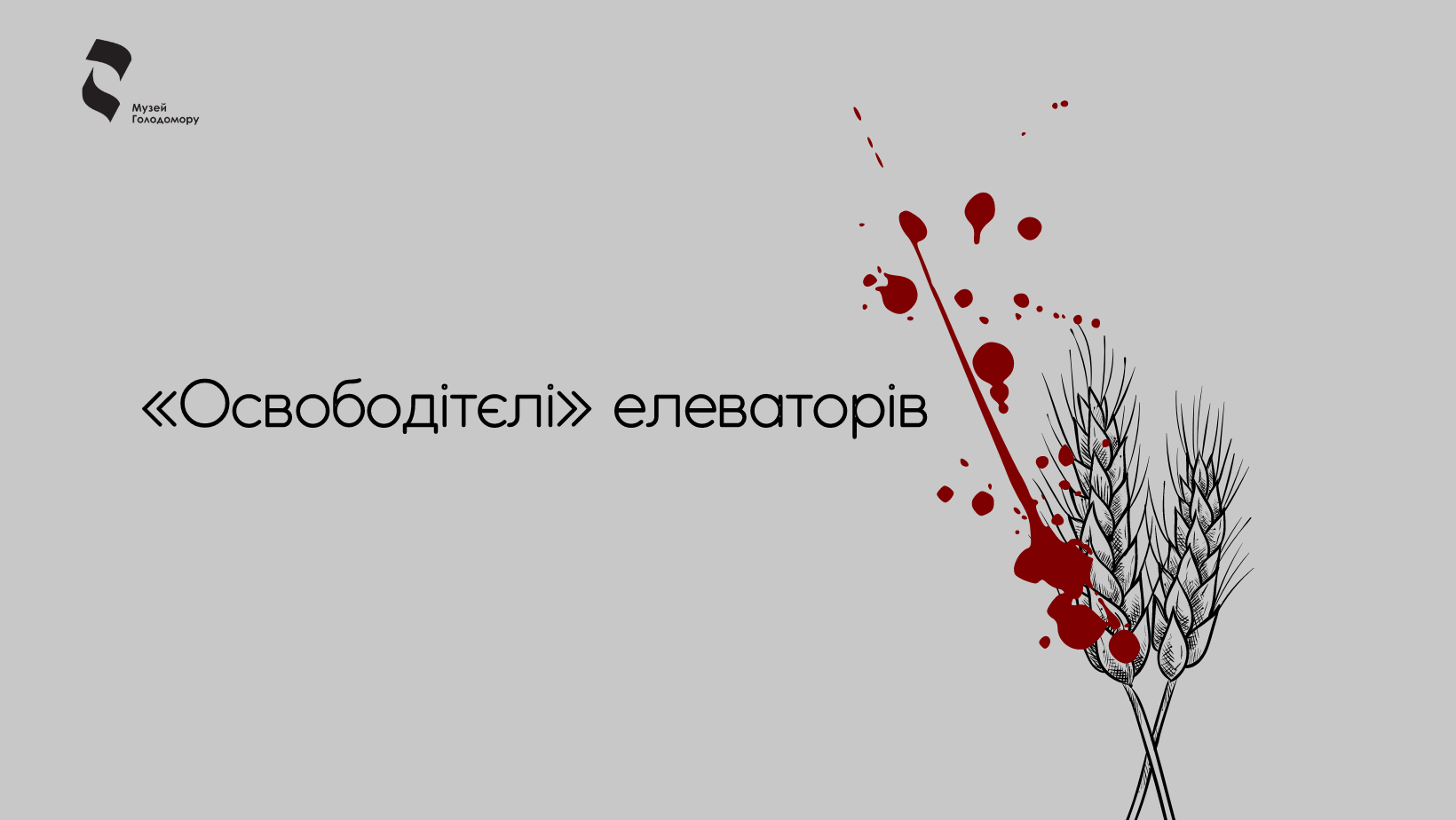 “Liberators” of elevators: the actions of the occupiers are reminiscent of the 30s

Russians steal grain and machinery and drive farmers to collective farms in the occupied territories, the rest of Ukraine – destroying elevators and food warehouses

Even if the war in Ukraine ends as soon as possible, the food crisis in the world will be for the next two years. After all, Ukraine will not have time; and somewhere will not be able to sow all the necessary areas due to the consequences of the fighting. Therefore, it will not harvest in the autumn a crop that would feed a large part of the world next year, experts say. Today, the spectre of famine threatens nearly 400 million people worldwide (Ukrainian exports grain to Europe, North Africa, the Middle East and Asia). It is significant that on the 90th anniversary of the Holodomor-genocide of 1932-1933, the Kremlin regime again tends to use famine as a tool to exterminate not only Ukrainians, but also to pacify the world that supports our country in this difficult time.

“All this is reminiscent of the thirties of last century”

The Russian occupiers stole and exported from Ukraine in the direction of Crimea approximately 400-500 thousand tons of grain. The Minister of Agrarian Policy and Food of Ukraine, Mykola Solsky, announced it. According to him, one ton of stolen grain costs $ 250-300. Even according to the most modest estimates, the amount stolen is estimated at more than $100 million.

“This is a big business run by top-level people: the secret services of the aggressor country, the military, and various swindlers,” the minister added. He explains that “this season, even when we controlled it, Crimea has already imported grain from other regions as standard.” And given that in the last few years, the peninsula has not actually grown grain, in particular, due to lack of irrigation, grain shipped from Crimean ports is undoubtedly stolen. “In our opinion, almost all ships that come with grain from Sevastopol are ships with stolen Ukrainian grain. After all, there is no reasonable logistical approach to move grain from the mainland of Russia and ship it through Sevastopol, if it can be done closer, through Russian ports,” Mykola Solsky added.

Associations are self-evident. “All this is reminiscent of the thirties of the last century and once again shows the true face of the Russian aggressor,” the minister said.

According to him, today, there is an understanding of what local traders and representatives of the Russian market are doing. Information about such cases is passed to law enforcement agencies, and the prosecutor’s office registers all the facts. At the same time, the Ministry of Foreign Affairs of Ukraine is working to ensure this grain to be promptly arrested and confiscated with the help of our Western partners.

There was a case when the occupiers tried to sell the looted grain to Egypt. However, they did not succeed – the swindlers were brought to light in time, so the Egyptians refused to buy the stolen goods.

Later, official Ukrainian sources reported that the grain stolen from Ukraine was already in the Mediterranean. On dry cargo ships under Russian flags, the cargo goes to Syria, one of the few countries that supports Putin and his policies. From there, grain can be sent to other countries in the Middle East.

Take it all away!

Even the theft of mineral fertilizers and agricultural machinery was recorded. So, in Melitopol, Zaporizhzhia region, in early March, invaders robbed the Agrotek dealer center, which is a distributor of John Deere, a manufacturer of agricultural machinery. Totally, they stole $5 million woth of 27 pieces of equipment.

However, the thieves could not use the loot – the equipment was blocked remotely. So the looters could not even start expensive cars. Thanks to GPS navigation data, it turned out that part of this equipment is located in Chechnya, near Grozny (it is more than 1,100 km from the place of abduction). It is known that the attackers are looking for specialists who can help bring it into working condition. As we can see, the ability to turn someone else’s good into the people’s, the Russians have not lost even over the years.

They take everything indiscriminately, confirms Dmitry Skornyakov, CEO of HarvEast agricultural company from Donetsk. 80,000 hectares out of 130,000 hectares leased by the company were occupied. “When the Russian military entered the Donetsk region, they probably decided to show that they are ‘the best people in the world.’ That’s why they allowed the locals who support the DPR to take away our fodder wheat,” Skornyakov  says ironically. Later, the occupiers began to export grain. They expropriated not only grain but also agricultural machinery. The Russians allowed local farmers who agreed to re-register with the DPR to take away any HarvEast equipment they liked. Very Bolshevik: to take from the rich (strangers) to give to the poor (their own).

However, this is not the whole point of occupation policy. In the best tradition, the “grandfathers took away,” the Russian invaders announced the creation of collective farms. And those who disagree are dealt with quickly and brutally. Serhii Haidai, the head of Luhansk OVA, spoke about the striking case. According to him, the rashists held a meeting of farmers in occupied Svatov and said that everything was returning to communal property, the collective farm.

“One of the small farmers stood up and said, ‘How do you imagine that?’ I have worked all my life on the land and have left my health, a lot of energy, and resources there. I have the result, I make money. This is my land, my equipment. People work for me. And you want me to give everything to the collective farm? I don’t want that,” Serhii Haidai said. In the evening, the occupiers came to his home in an APC and shot the house. Thank Goodness, people survived. “In this way, they suppress any desire to argue with the rashists,” Serhii Haidai added.

And wherever the occupiers’ hands do not reach, their missiles reach. They are deliberately hitting elevators and food warehouses. Yes, they destroyed a state-of-the-art elevator in Rubizhne, Luhansk region – it was built only in 2020 and equipped with the latest equipment. Together with the premises, all agricultural products stored there were destroyed: 17 thousand tons of wheat and 8.5 thousand tons of sunflower. The amount of grain burned by the impact could feed 300,000 people a year. In addition, the Russians bombed elevators in Mykolayiv, Dnipropetrovsk, and Zhytomyr regions.

And yet – the enemy deliberately blocks the delivery of food to the occupied cities and villages. As a result of such actions – we already have many cases where people died of malnutrition and dehydration. And this is in the XXI century, in a state that is considered the breadbasket of the world!

“The genocide of Ukrainians in the current Russian-Ukrainian war through the artificial creation of famine is manifested not only in blocking food aid to the surrounding settlements but also in preventing the sowing of fields. The latter is deliberately destroyed by the occupier’s military actions, the enemy undermines agricultural equipment, shoots primarily at tractors, bypasses our black soil,” the head of the Department of World Ukrainian History of the Taras Shevchenko National University of Kyiv, Doctor of History, Professor Volodymyr Serhiichuk noted. “And this is not only the genocide of Ukrainians, but it is also a punishment for the whole world that supports Ukraine today because our unsown fields are unharvested bread and other products that we share as a recognized world granary.”

The export of grain from Ukraine is not an amateur looting but a consistent policy of Russia. Although, Russia itself pretends not to be involved.

“This grain, equipment, oil, etc. are not stolen by Russia as a sovereign; they are stolen by commercial looters who accompany the armed forces of the Russian Federation. Due to corrupt connections, under the guise of Russian troops, they are carrying out looting operations in the occupied territories, said Oleh Pendzin, an economic expert and member of the Economic Discussion Club. – That is, we are talking about robbers who are covered by the Russian Federation. In the context of what is happening: we are dealing with a state that finances terrorism. And the fact that numerous countries, including the Baltics, have identified Russia as a terrorist country is the first step towards further recognizing Russia as a country that finances terrorism.

At the same time, we remember what happened to the Russian occupier in the north of the Kyiv region and how they took everything they could from there. Now we see their behaviour in the south of Ukraine and understand the general trend.”

So far, there has been only one official appeal from the authorities of the Krasnoyarsk Territory regarding the possibility of exporting grain and vegetables for domestic needs, the expert reminds. But this information then quickly disappeared from the official website, where it was published. “That is, they are well aware of the legal consequences of such things at the state level. That’s why they act more cunningly – they commit robberies at the hands of commercial thieves, and in the case of the state – “ichthamnet” – adds Oleh Pendzin.

But the thieving ears of the Russian authorities are still sticking out over these crimes. And while Russia is stealing tons of grain from Ukraine, Putin says the federation expects a “record harvest.” “According to preliminary estimates, grain harvest could reach 130 million tons, including 87 million tons of wheat. If that happens, and we will count on it, it could be a record in the history of Russia,” Putin said.

Isn’t this record harvest predicted at the expense of Ukrainian grain? Because the “harvest” of Putin’s robbers in the south and east of Ukraine is in high gear.