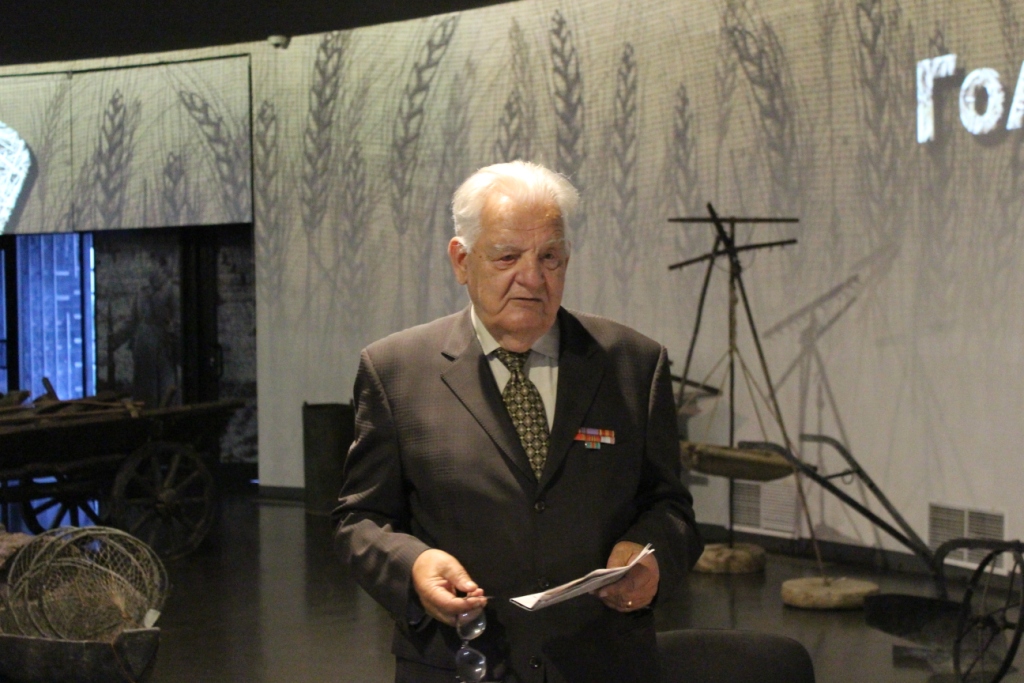 Meeting with Borys Kulchytskyi, the witness of the mass man-made famine of 1946–1947

On May 22, in the National Museum “Holodomor Victims Memorial,” a meeting with an eyewitness of the mass man-made famine of 1946–1947 Borys Kulchytskyi was held.

Borys Kulchytskyi was born in 1929 in Podillia, in the town of Volochysk, Khmelnytsky region. His father, Jan Kulchytskyi, worked as a smith at the Volohysky sugar refinery, and in 1937 he was repressed and executed by NKVD employees. These were terrible years: collectivization, the Holodomor, repressions…

The family of “the enemy of the people” changed over thirty places of residence during the four prewar years and finally stopped in the Khmelnytsky region of Vinnytsia region during the war.

At the end of the Second World War, the family hoped for a better life, but new trials were ahead.

Recalling the famine of 1946–1947, our guest repeated again and again: “I myself do not believe what this was. How was it possible?” Heavy burdens for the population were high taxes that were imposed even on fruit trees and berry shrubs.

According to the witness, there were no the natural causes of famine. He puts the blame on the Soviet authorities only: “In 1946–1947, the harvest was poor, but every day, from our small station in Khmelnytskyi, a train full of grain was sent to Eastern Europe, to the countries of the soviet democracy, to please them. And in Ukraine, people were not only starving, but dying of famine.”

Having lived a long life and having had great experience, Borys Kulchytskyi made a logical conclusion: “No hunger, no war, no epidemic, no different political repression do not arise suddenly – from some time, but they are planned, they are implemented, they are performed with a certain intent!”

To hear the story of the crimes of Soviet power, the students of the 6–9th grades of school №133 of Kyiv and the Ivan Piddubnyi Olympic College came to the museum. The pupils were impressed by the story of Borys Kulchytskyi. They had a lot of questions because today it is quite difficult for young people to understand the motives and mechanism of the destructive policy of the Soviet totalitarian regime towards the Ukrainian people.