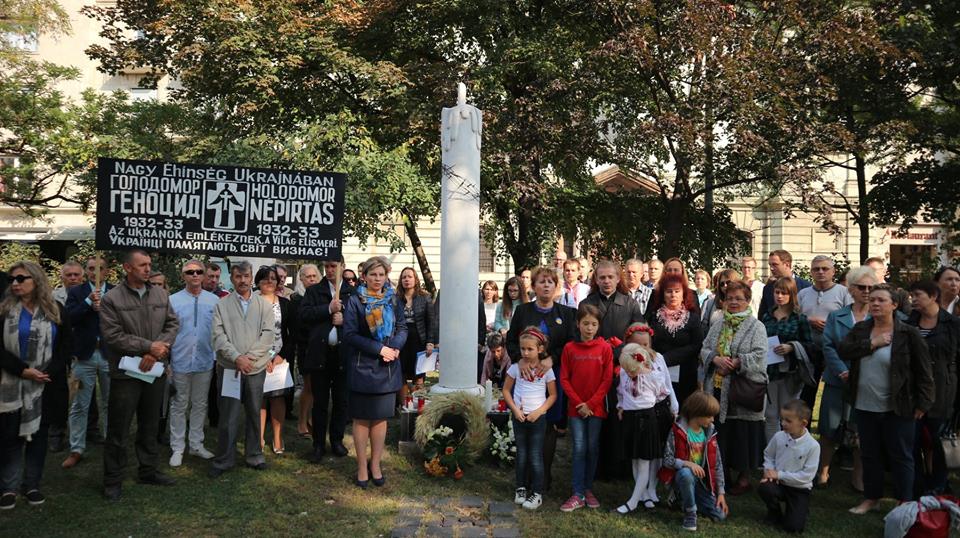 Memorial events took place in Hungary in the framework of the International action "Let's Light a Candle of Memory!" commemorating the victims of Holodomor

Memorial events took place in Hungary in the framework of the International action “Let’s Light a Candle of Memory!” commemorating the victims of Holodomor

The commemorative events within the framework of the “Let’s Light a Candle of Memory!” campaign began in Budapest at 12:00 in the church of St. Michael, where the Ukrainian Greek Catholic community (Parish of the Protection of the Virgin) meets on Sunday morning. Before the church liturgy, which was this time dedicated to the memory of the innocent victims of the Holodomor, the Ambassador of Ukraine to Hungary Liubov Nepop, the First Deputy Head of the World Congress of Ukrainians, the Head of the Ukrainian Culture Society of Hungary Yaroslava Khortiani and the priest of the Ukrainian Greek Catholic Church in Hungary Father Damian Gaborius lit the candles of memory that will be lit in the church during each Sunday service until the end of the international action.

Before the ceremony of lighting the candles, the Ukrainian Ambassador to Hungary spoke to the participants of the event, and told the audience about the purpose of the campaign “Let’s Light a Candle of Memory!”. She reminded the audience that in 2003 the National Assembly of Hungary adopted the Resolution recognizing this tragic event as a genocide of the Ukrainian the people. In this regard, Liubov Nepop expressed deep gratitude to the Hungarian people for supporting Ukraine in its efforts to urge the international community to condemn a terrible crime that has deprived the lives of nearly 10 million of our compatriots. Also, shew noted that Ukraine continues to count on the Hungary`s support in conditions of Russian aggression, when the empire of evil tries to destroy the will and freedom of the Ukrainian people.

After the candles were lit, a Divine Liturgy was held in memory of the victims of the Holodomor. The liturgy was accompanied by the choir “Novus”. At the end of the liturgy, the song “Eternal Memory” was performed.

At the end of the liturgy, the participants of the event went through the city of Budapest on a walk with posters in the Ukrainian and Hungarian languages ​​”Ukraine remembers – the world recognizes”, “Genocide of the Ukrainian people of 1932-33” to the monument to the victims of the Holodomor of 1932-33 in Ukraine, where the memorial ceremony was continued.

At the beginning of the memorial ceremony near the monument to the victims of the Holodomor, a poem about the Holodomor was read out by Oksana Gabor. After this the participants of the action read out the names of the 85 children, dead because of Holodomor, from the list of millions. Each participant of the action, after reading the name, put a spikelet to the monument, leaning his head in memory of the dead from starvation.

After the memorial ceremony, a memorial service was performed for the dead, accompanied by the Ukrainian choir “Novus”, who performed the church songs.

Ambassador of Ukraine to Hungary L. Nepop and the Head of the TUKU Y. Khortyan addressed to the participants of the event with speeches.

After speeches, a ceremony of laying a wreath made of spikes, laid by the children from the Ukrainian community of Hungary took place. During the laying on of the wreath, the choir “Novus” performed “Eternal Memory”.

After laying the wreaths, participants of the action lit a symbolic candle of memory, put it on a monument and, with a minute of silence, honored the memory of innocent victims of Holodomor.

The event in the framework of the World Action “Let’s Light a Candle of Memory!” was completed by the implementation of the Ukrainian anthem.

The memorial events “Let’s Light a Candle of Memory!” were attended by the representatives of the Hungarian public, Ukrainian chambers of Hungary and employees of the Embassy of Ukraine in Hungary with their families.