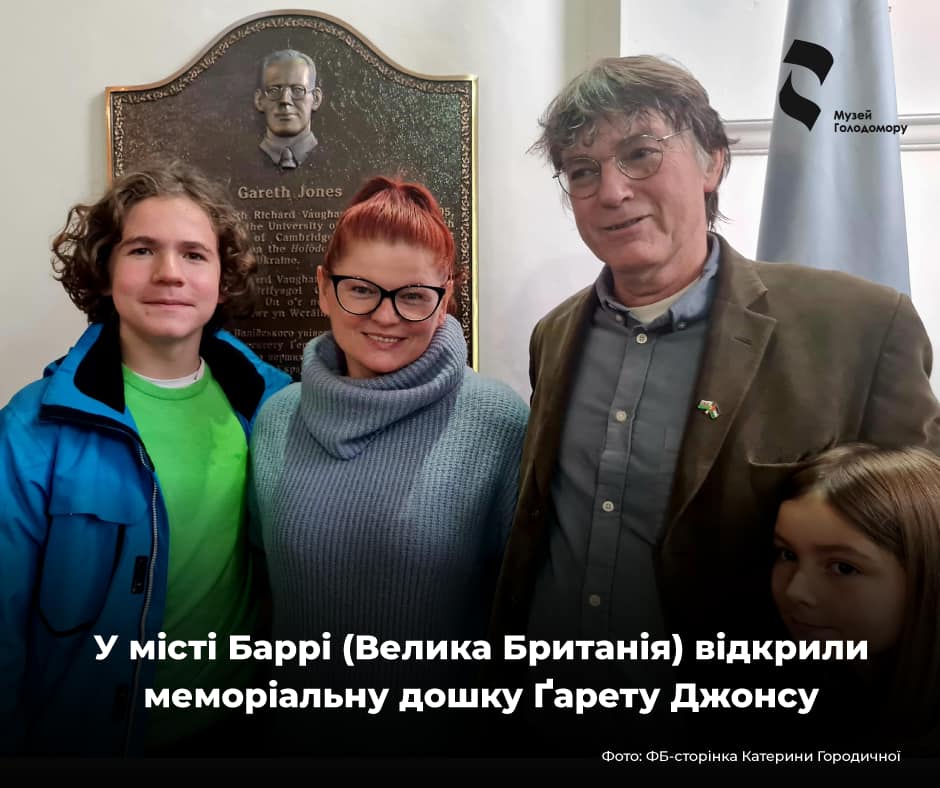 On October 30, in the city of Barry in the south of Wales (Great Britain), a memorial plaque was opened in honour of journalist Gareth Jones, who was one of the first foreigners who not only learned about the Holodomor in Ukraine but also told the world about this crime of the communist regime.

The memorial plaque was made in Canada at the expense of Ukrainians of Canada and the United States. It was brought to Wales thanks to funding from Barry City Council in partnership with Mick Antoniw and Jane Hutt. A memorial plaque is installed inside the church at Barry’s oldest cemetery, where the journalist and other members of his family are buried.

The plaque opening ceremony was attended by the great-nephew of Gareth Jones – Philip Colley – and other relatives, the mayor of Barry Helen Payne, the Ambassador Extraordinary and Plenipotentiary of Ukraine to the United Kingdom of Great Britain and Northern Ireland Vadym Prystaiko, the Minister of Social Justice of Wales Jane Hutt, a member of the National Assembly of Wales of Ukrainian origin Mick Antoniw, residents of Barry, representatives of the Ukrainian diaspora from various parts of the UK, as well as the first Ukrainian refugees to Wales in 2022, Kateryna Horodnycha and her son Timur.

“I am so pleased to see Gareth being remembered and honoured here in Barry and to see this wonderful plaque adorning the walls of this beautiful chapel in Merthyr Divan. Here we are in 2022, but Gareth passed away back in 1935. One might ask, why did it take so long for him to be honoured in this way? I believe the answer is that after his untimely death, despite his amazing life and everything he did, Gareth faded into obscurity and was almost forgotten. It took decades of hard work to restore his memory to its rightful place in history,” Philip Colley said during the event.

A refugee from Ukraine, Kateryna Horodnycha, said that residents of Barry are somewhat familiar with the life and activities of journalist Gareth Jones, but his parents are more known and respected in the city. Gareth’s mother was a famous fighter for women’s rights – a suffragist who was one of the first in Great Britain to obtain a higher education and worked as a teacher-governess for the grandchildren of the Welsh entrepreneur, the founder of Donetsk, John Hughes. The journalist’s father put much effort into the townspeople’s education. Residents of Barry, says Kateryna Horodnycha, are interested to learn that G. Jones’s memory is honoured in Ukraine and, in particular, streets are named after him.

After the plaque unveiling ceremony at the church, its members laid flowers on the grave where G. Jones and his parents were buried.

Reference. Gareth Jones (1905–1935) – British journalist, Welsh. Educated at home, he later attended his father’s school in Barry, Aberystwyth College, the University of Strasbourg (1923–1925) and Trinity College, Cambridge (1926–1929), graduating with honours. He knew five languages. He passed the exams for work in the consular service but refused to go to China. He travelled to Europe and the USA and worked on ships in different countries. In 1930, he became an adviser on international affairs to the former Prime Minister of Great Britain, David Lloyd George. For some time, he used to work as an assistant to D. Rockefeller’s public relations adviser Ivy Lee, after which he returned to work at Lloyd George. Simultaneously, Jones wrote articles for many British newspapers and foreign publications. During a trip to the USSR in March 1933, he illegally visited Ukraine. On March 29, Jones published a press release describing the suffering of starving Ukrainians and later several reports on this topic in British, American, and German newspapers. For spreading information about the Holodomor, which the USSR tried to hide, the communist regime and unclean Western journalists harassed him. In the summer of 1935, G. Jones went on a trip to Chinese Inner Mongolia, accompanied, as it turned out, by a Comintern agent, and was kidnapped and killed under circumstances that have not been fully clarified.