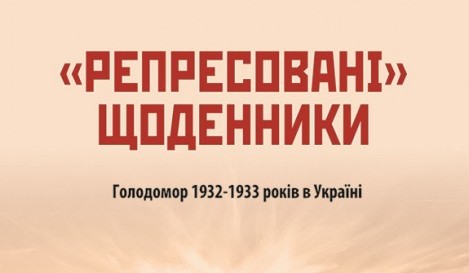 The book “Repressed” Diaries. Holodomor of 1932-33 in Ukraine” was published at the Ukrainian Institute of National Remembrance, which collected diary records of witnesses of the Holodomor.

The publication is characterized by immediacy of description, since, with the exception of the introductory article, its “authors” are “participants” or observers of the events of 1932-33. They give invaluable facts, but at the same time do not shy away from subjective thoughts – what surprises them,  what can not one believe in, how it really looked like.

The book consists of diaries of 7 people who lived in Kyiv, Kharkiv and Odesa regions and belonged to different social groups – peasantry, intelligentsia, and party workers. Some of the texts have been partially or fully published before. For example, the diary of Nestor Belous in 2008 was revealed by Nina Lapchynska, the main keeper of the funds of the National Museum “Holodomor Victims’ Memorial”, ​​and introduced to the scientific circle.

The diaries of the Kharkov peasant, Nestor Bilous (from 1911 to 1934), are “a kind of a chronicle of the destruction of the Ukrainian village by Soviet government”. Repeatedly speaking against the methods of the Bolsheviks against the peasantry, Belous eventually appeared in a court and was sent to camps.

Alexander Radchenko was a teacher in the Kharkiv region, who “had the passion to reflect all her experience in the diaries,” as she spoke in the court. At the same time, she, together with the husband, engaged in the salvation of the peasants during the Holodomor, hiring them to work in the forestry (the forestry did not fall under the grain procurement).

Dmitry Zavoloka is distinguished from the rest of the witnesses – he was a party worker, head of the department of culture and propaganda in one of the districts in Kyiv, lived in the city center, but often the actions of the Communist Party of the USSR caused him rebellion, which he poured in his diaries, describing horrible pictures of the famine in the villages of the Kyiv region, stories heard from the mother, friends and acquaintances – first, not believing in them, but then, making sure on his own eyes, he was convinced and terrified of “a picture of devastated, like after the war, Borispol”.

The teacher Yuriy Sambros went through the repressions of the intelligentsia in the 1920s and was able to become an outstanding scientist in the USSR, but in 1932-33 he lived in Kharkiv, where he wrote diaries describing the atmosphere of fear, the death of people directly on the streets and ways of survival.

The political migrant Dorothe Federbusch arrives in Kyiv in 1932, when “the corpses of dead from starvation were lying on the streets”, then moves to Kharkov, where she works as a correspondent. She wrote the diary “at the times of particularly strong indignation” – from party politics, inhuman atrocities, and so on. At the trial, the Bolsheviks called the Federbush diary “full of malice against Soviet government”.

Oleksiy Nalyvayko taught in Odesa region during the Holodomor of 1932-33 (from which his father died) and kept a diary where he could secretly record his thoughts on the destruction from hunger. His notes are of a high literary style and full of pamphlets, journalism, and accusative sentiments to the party line and those responsible for the Holodomor of 1932-33.

Mikhail Sin’kov moved from Uzbekistan to Kharkiv as a child, where he became a chemist. In his 1932-33 memoirs, he takes a marginal position, accusing the peasants themselves of being hungry, because they denied the politics of collectivization. However, at the interrogation of the NKVD, he sees the root of the problem in party policy mistakes that led to the beggars and the hungry who flooded the streets of the city in 1932-33. “In this notebook I will write what I consider interesting” – the scientist gives such a rationally-objective subtitle to his notes.

Almost all of the “scriptors” of the Holodomor suffered for their records – they were sent to the camps, sentenced to camp works, and so on. However, thanks to this, diaries have come to us because they have been preserved in the archives as an annex to criminal cases. After more than 80 years after the Holodomor-genocide, the general public will be able to hear the story firsthand. The book can be found under free access on the site of UINP.