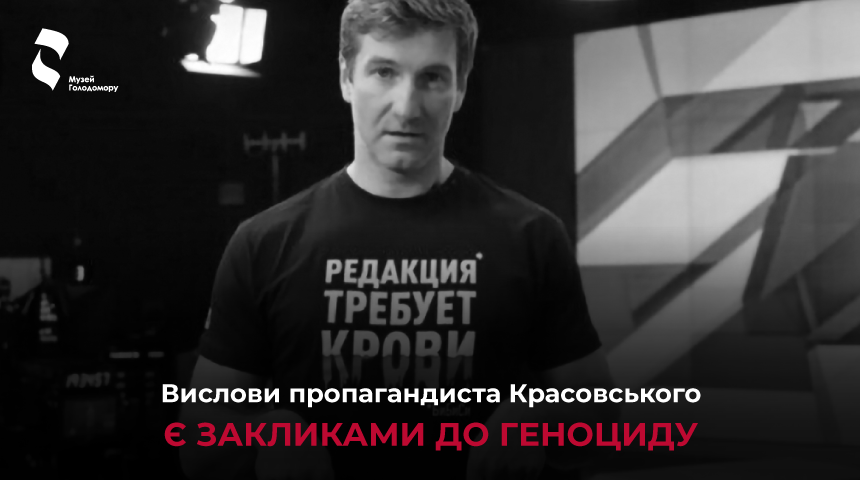 Russian propagandist Anton Krasovsky called for Ukrainian children to be drowned in rivers and burned in “spruce huts” in his author’s TV program. The program broadcasted on October 20 on the RT channel. The guest on it was the Russian fiction writer and Putin’s supporter Serhii Lukyanenko.

Propagandists argued over the choice of punishments for Ukrainian children. “You are intelligent people, fiction writers, and this is our method,” Krasovsky emphasized the need for uncompromisingness in committing the genocide of Ukrainians. Lukyanenko tried to deny it and mentioned “traditions”: “…in Rus’, there were rozgi (rods) for this.” But Krasovsky intercepted the “educational” initiative and proposed to burn children in “spruce huts”. After all, he declared that Ukraine “shouldn’t exist at all.”

The words of Kremlin propagandists, which are open calls for genocide, caused outrage in Ukraine and beyond.

Thus, the Minister of Foreign Affairs of Ukraine, Dmytro Kuleba, called on all countries of the world to ban the broadcasting of the Russian state TV channel RT, accusing its host, Anton Krasovsky, of calling for genocide. “Governments which still have not banned RT must watch this excerpt. This is what you side with if you allow RT to operate in your countries. Aggressive genocide incitement (we will put trial for it), which has nothing to do with freedom of speech. Ban RT worldwide!” – Dmytro Kuleba thinks.

We want to remind all Russian propagandists that they will definitely be responsible for their words and criminal calls for genocide – the most violent crime in international law. As happened with the Nazi propagandists convicted at the Nuremberg trials, as well as the propagandists of the Radio of a Thousand Hills involved in the genocide in Rwanda.

Currently, Ukraine has initiated a separate resolution to the Council of Europe regarding Russian propaganda. Its goal is not just to include propagandists on sanctions lists but to bring them to justice for criminal activity.