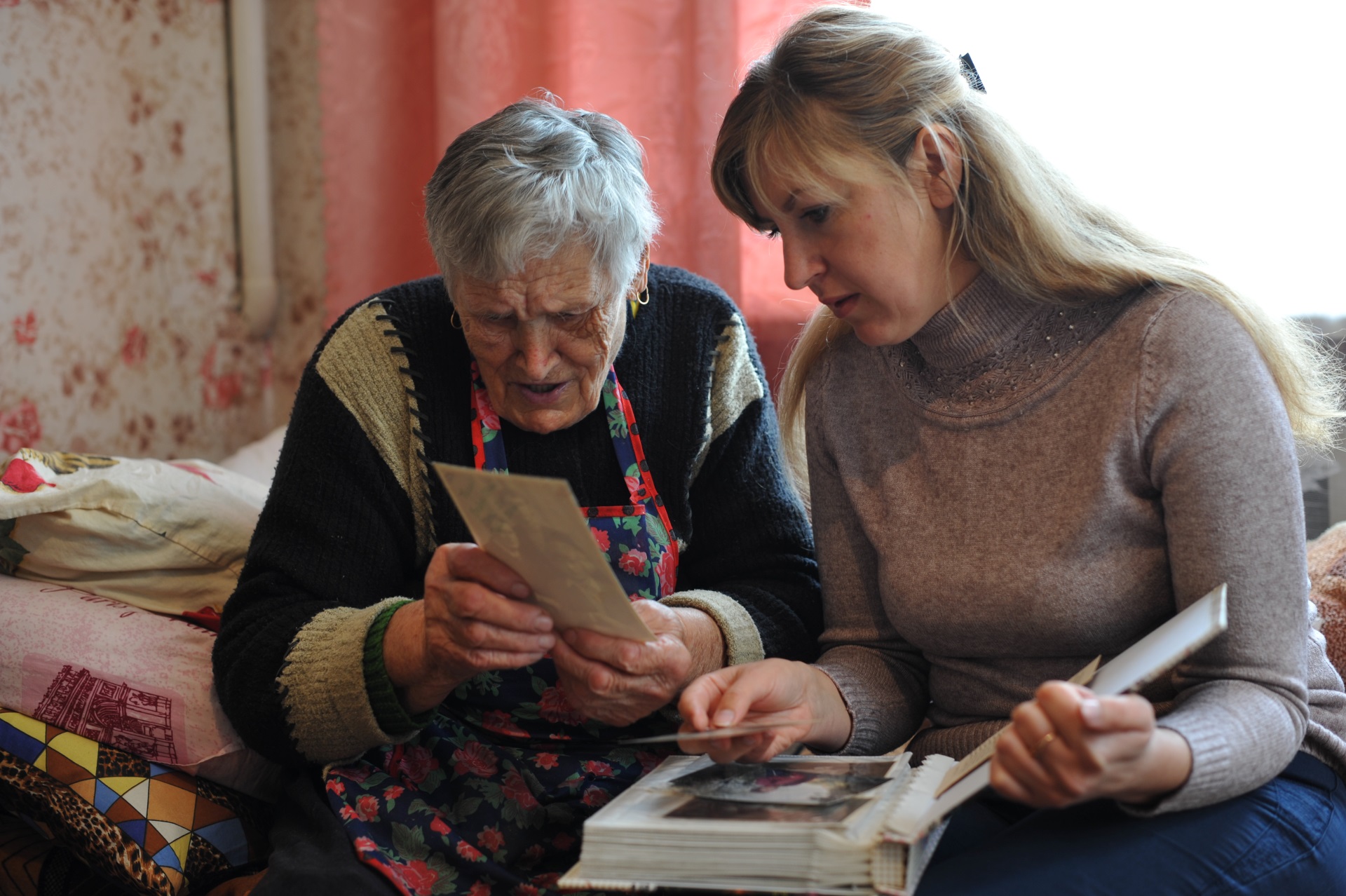 On September 30, 2017, the head of the research department of the museum, Julia Kotsur, together with the photographer Ksenia Pyliavska within the program of recording the memoirs of people who have survived the genocide in 1932-1933 in Ukraine, came to the witness of the Holodomor to the town of Boyarka near Kyiv.

The turbulent twentieth century made this woman to “travel” a lot. She was born in the village of Liutenski Budyshcha of Zinkivsky district of the Poltava region and survived the Holodomor there. As a little girl, trying to stay alive under the circumstances of hunger, Maria Velychko, along with her younger sister, went to Donbas region to the city of Kostiantynivka. Then the sisters returned to their native village, when the Second World War began. Another difficult period in the life of Maria Nykyforivna were three years of forced labor in Germany and the difficulties for such “enemies of the people” upon returning to their homeland. The post-war years a woman survived in Gadyach, Poltava, and later the fate again leaded her to Donbass, this time to the city of Makiyivka.

Born in Poltava region, Maria Nykyforivna well remembered the lore of her grandfather, who accustomed her granddaughter to respect the work and appreciate the bread. In the early 1930s, the Velychko family was dekulakized: “They made our father to give the horse to the kolkhoz. At that time they were taking everything to the kolkhoz, and they wanted everyone to give everything for free. Father did not give the horse. Mum took the horse off, took it to the fair and sold it. Then that “order” was not like this everywhere. And somebody bought a rabbit there. They came and dekulakized this man. They came to us, we have all the things, they said that they will be an auction, they will sell the mother’s hutch. There they took everything and on someday, a day or Sunday, well, I do not remember on what day. How they … how everything was done: a lot of people gathered … you know what a rohach and a kocherha are? They take the thing on a rohach, they raise it – who wants a skirt, who wants a sweater, who wants this or that. I remember how my mother was weaving on a machine tool; I still have a piece of cloth my mother weaved. And they took everything for sale. And I cried a lot …”.

During terrible famine years, the Velychko family was taken off all the products. Maria Nykyforivna still remembers two pies, which she exchanged as a little girl in the hut of the collective farm head for the handkerchief given by her mother: “I came to her, gave this woman a handkerchief, and she gave me two pies. I had one eaten while I got home, I was crying so much: “Mom, I’m sorry, I could not restrain myself. I was chipping piece by piece (it was the village pie, the large one, not like our ones). I chipped, chipped and ate. “

Holodomor took its fatal harvest throughout the great Velychko family. “The head of the collective farm comes to and says:” Let’s go and see what’s going on here in the house. “When they … stopped, and saw they all are dead, all four – mother and three children. They come closer and say: “The car is needed.” When they died, they were thrown off by pitchforks, like taken on the pitchforks – and thrown them away, because they were decomposing – such a stink … But than one uncle says: “Her eyes seem to be moving … eyes. It`s like she`s breathing (the woman) “. He comes closer, says: “Breathes. Throw her quick! “They took the hands, the legs, they threw her into the phaeton and said: “Let’s go, children will be taken later”.

The Velychko family escaped to Donbas during Holodomor, to the city of Kostiantynivka, where Mariya Nykyforivna’s father started to work on butter factory. Mother with her children moved on to him a hungry 33rd year. The other grandfather of the Holodomor eyewitness – Semen, stayed in the village where he died of starvation: “And he says (near the cellar of my grandmother in the yard, such a beautiful cellar, smeared with clay, it was possible in the summer … there lay apples, pears, fell out, smelled always good): “I will lie down a little, I will breathe”. Lay down so, and did not get up – died of hunger. “

As a child Maria Nykyforivna felt on her own shoes the infamous “law about five spikelets”: “And the guard rides on the horse, beats by a whip, in order for us not to collect the grains. So we go as early as we get up very early, before the sun ascent, we go to the middle – there are more ears the combine has left, I look to the forest – there are fewer ears. So in the evening we go to the forest with such bags of the canvas … and look if the guard rides, look on one side, on the other side. The guard rides, hangs the horse… and then how whips by the long lash…”.

Summing up her bitter experience from childhood, Maria Nykyforivna notes that mutual help and respect in the family and in society are the basis for withstanding the most difficult trials: “No, you can`t abuse mother or father, or brother or relatives, or even alien person. These people have withstanded so much, suffered and struggled so much. In spite of everything, we have the best country…  I love Ukraine as much as I loved my mother, my father, as I loved my sister. “