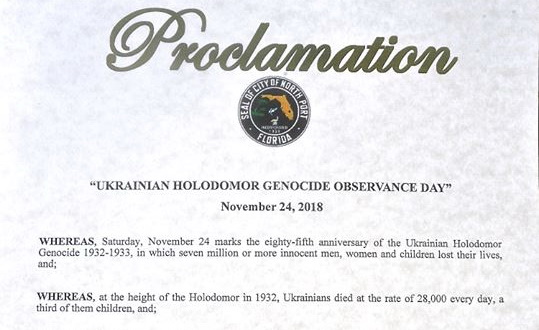 The City Council of North Porto (Florida), at its meeting on November 1, adopted a proclamation that November 24, 2018 is the Day of Remembrance of the Ukrainian Genocide on the occasion of its 85th anniversary, the Internet resource “Mist” informs.

In October 2018, an exhibition of Ukrainian books, magazines, tokens and flyers on the Holodomor-Genocide of 1932-1933 in Ukraine was held in the public library of Jakaranda in the city of Venice, Florida. The exhibition was prepared by Nelia Lehman and Vira Bodnaruk, representatives of the 56th Division of the Union of Ukrainian Women in America, with the help of Lida Dykhdala and Bohdan Bodnaruk.

Also, the Public Committee of Southwest Florida and the Florida Department of the American Committee for the recognition of the Ukrainian Genocide-Holodomor arranges a commemorative concert on Saturday, November 17, at the Presbyterian Church in Venice. For the first time in Florida, there will be the Female Ensemble of North American Bandura players and well-known musicians Solomia Ivakhiv (violinist), Volodymyr Vynnytskyi (pianist), Natalia Khoma (cellist), Zoya Rozhko (soloist of the Kyiv State Opera) and Oleg Chmyr (baritone).

The funeral service for victims of the Holodomor will take place on Sunday, November 18, at the Cathedral of the Entrance to the Church of the Blessed Virgin Mary in the city of North Port.