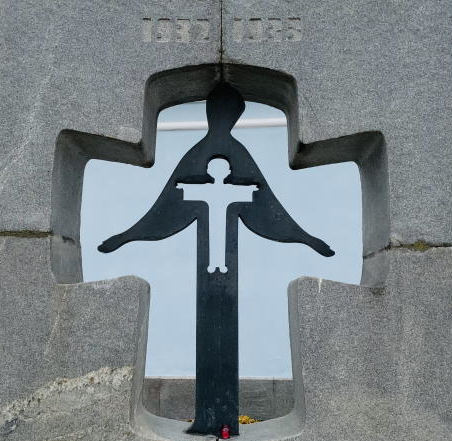 The Association of Holodomor Researchers in Ukraine celebrates its 30th anniversary

June marks the 30th anniversary of the Association of Holodomor Researchers in Ukraine.

“The idea of ​​creating a research institution that would deal with the problems of the Holodomor appeared in the early 1990s,” recalls Vasyl Marochko, chairman of the board of the Association of Holodomor Researchers, doctor of historical sciences. – At that time, it did not find support in the government, especially in the Verkhovna Rada of Ukraine, among which supporters of the theory of “all-Union hunger” prevailed. They did not recognize the genocidal component of the Holodomor, let alone its legal recognition. We had to rely on a public initiative to restore historical justice and condemn the crimes of the totalitarian Stalinist regime in Ukraine.”

“Creating our Association, we followed an unconventional path. Instead of gathering a group of people in Kyiv who would declare themselves an association, we started creating centres in all regions of Ukraine that were starving and abroad – Lydia Kovalenko-Manyak, the founder of the Association, told in an interview with Suchasnist magazine. – And when there were already people in the places, we gathered them for the founding congress. We still had nothing at all – no premises, no stable material base – but there were people devoted to the holy cause.” 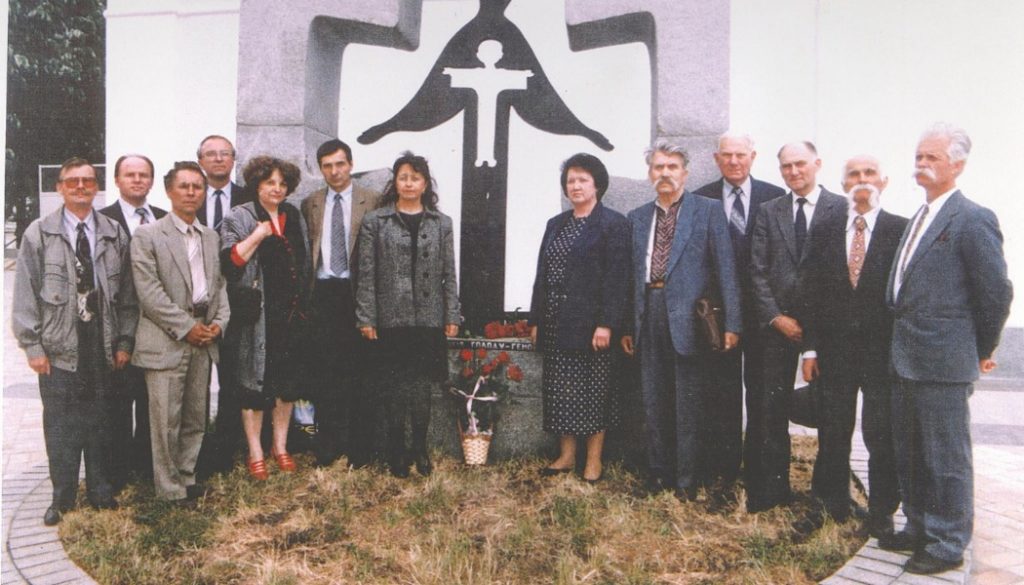 Participants of the 4th Congress of the Association of Holodomor Researchers near the monument on Mykhailivska Square in Kyiv. May 22, 1998

The founding congress, which Lidia Kovalenko-Manyak mentions, took place on June 27, 1992, in the meeting hall of the Writers’ Union of Ukraine. It was there that the All-Ukrainian Association of Famine-Genocide Researchers was created (in 1998, it was renamed the Association of Holodomor Researchers in Ukraine). People’s deputies, writers, historians, farmers, the Holodomor witnesses- Ivan Drach, Les Taniuk, Lidia Kovalenko-Manyak, Natalia Dziubenko, Oleksandra Veselova, Mariyan Kots, Dmytro Kalenyk (in his parents’ family, which had 14 children, 12 children starved to death), Oleksandr Mishchenko (Oles Volia) and others, took part in the work of the congress.

“Step by step, year by year, collecting and recording the eyewitnesses’ memories and the Holodomor victims, discovering archival documents about the Moscow-organized famine in Ukraine, we moved towards its legal and political recognition, acceptance by the international community and Ukrainian society,” continues Vasyl Marochko. – Our movement towards the truth seemed thorny, as the pro-Moscow forces in Ukraine resisted, but we had the truth and the will behind us. We have overcome this path: we have dozens of collections of Holodomor witnesses’ memoirs, archival documents, the Law on Recognition of the Holodomor as Genocide of the Ukrainian People of 2006, the National Museum of Holodomor-Genocide.”

On September 12, 1993, at the initiative of the Association, a memorial sign was erected near St. Michael’s Cathedral in Kyiv to commemorate the Ukrainians who died of famine – the first in Kyiv and one of the first in Ukraine. The competition was held by the Association, which was engaged in its construction and protected against attempts by the KMDA to move it to another place.

In different years, the Association was headed by Lidia Kovalenko-Manyak, Levko Lukyanenko, and Vasyl Marochko, who is still its head today. American researcher James Mace was the honorary chairman of the Association.

During the Association activity, it held a number of conferences, exhibitions, and public events and issued a whole list of editions and publications in the press. The association initiated and joined various public initiatives to research and spread the truth about the Holodomor-genocide, commemorating sad anniversaries, and sought condemnation of the crime and punishment (even years later!) for those who committed it.

The Association several times initiated criminal proceedings regarding the Holodomor in Ukraine, despite the fact that law enforcement authorities “did not find signs of a crime under the Criminal Code of Ukraine.” In January 2010, the Kyiv Court of Appeal found Joseph Stalin, Viacheslav Molotov, Lazar Kahanovich, Pavlo Postyshev, Vlas Chubar, and Mendel Khataievych guilty of committing the Holodomor-genocide crime of 1932-1933 in Ukraine. Members of the Association provided testimonies and expert opinions of historians to the court.

“In January 2022, the AHRU (The  Association of Holodomor Researchers in Ukraine) Council began preparations for convening the Association’s next congress to elect a new team and, most importantly, to prepare events for the 90s anniversary of the Holodomor. The annexation of Crimea by Russia, the capture of the regions of Donbas, starting in 2014, and especially the Russian-Ukrainian war, which began on February 24, 2022, eliminated the activities of AHRU branches in the occupied territories. The tragic history of Ukraine did not teach the passive part of society the basic truths: unpunished evil will inevitably return. The world looked indifferently and even ignored our appeals to recognize the Holodomor as a genocide of Ukrainians in 1932-1933. Now we have the facts of the genocide of Ukrainians as a result of Russia’s military aggression in 2022, Vasyl Marochko emphasizes. – The world shuddered at the crimes in Bucha, Irpen, Gostomel, and Mariupol. A terrible price for the diplomacy of silencing the Holodomor in Ukraine, for the expression of formal “concern” by Europe and the world, regarding the open aggression of Russia in 2014. The political indifference shown by all the leaders of European countries in the 1930s led to the concealment of the fact of the Holodomor-genocide. Evil was not condemned, so it returned to us after 90 years.”

And this means that the researchers’ work must continue.