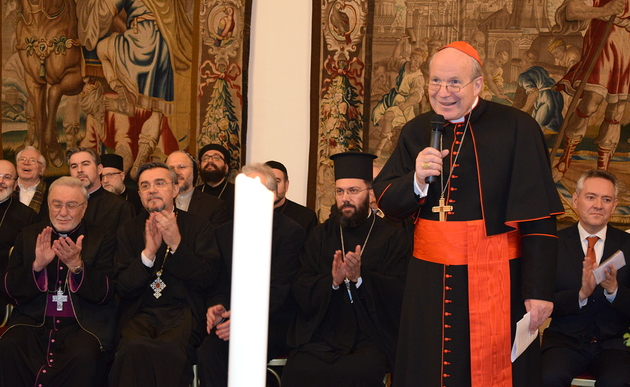 The Catholic Church honored the memory of Cardinal Theodor Innitzer

Cardinal Christoph Schönborn, at a traditional International reception on the occasion of the World Week of Pray for the Unity of Christians, especially emphasized on the memory of Cardinal Theodor Innitzer who, in 1933, helped the victims of the Holodomor and Ukrainians in Austria. The direct speech of the archbishop cites the Catholic Press Agency of Austria.

“Cardinal Theodor Innitzer managed to attract the attention of the whole world in 1933. On October 16, 1933, he founded the “Inter-Confessional and International Committee for Assistance for the Starving Provinces of the Soviet Union” at the Episcopal Palace (Vienna, Austria – ed.). It was a specific action of its kind unique, which was supposed to help millions of people in Ukraine who were threatened with hunger death. The cause of the so-called Holodomor was the policy of Stalin’s orders, which deliberately entailed a catastrophe of starvation with millions of deaths. Cardinal Annucer, who reacted to these events, makes him a model of solidarity and vigilance, “Schonborn said.

Cardinal Theodor Innitzer was one of those who overseas worried about the famine starving during the Holodomor of Ukrainians. Taking into consideration Andrei Sheptytsky’s calls, he created an “Inter-Confessional and International Committee for Assistance to the Starving Provinces of the Soviet Union” in Austria. On August 20, 1933, Cardinal Innitzer openly appealed to the world community to launch a process to help millions of innocent people who have died of hunger. His appeal, entitled “Cardinal Innitzer Calls the World Against Hunger in Russia (the Soviet Union – Ed.)” Was printed in imperial mail and spread throughout the world.

“The fact that hundreds of thousands, even millions of people in Soviet Russia died of hunger in recent months, can not be denied any more, hundreds of exciting letters from the Soviet Union, especially from Ukraine and the North Caucasus, which are famine-stricken, report it, the same is evidenced by eyewitnesses whose competence is no doubt, “the cardinal wrote. Subsequently, he was repeatedly published in the western press and gathered conferences that would draw the attention of the world community to the genocide that the Soviet Union kept silent about.

Currently, the work of the Cardinal to curb the Holodomor is unknown to a sufficiently broad public, so every public mention of his figure serves as an additional reverence for all philanthropic people who have contributed to spreading the truth about the Holodomor and have taken preventive measures.