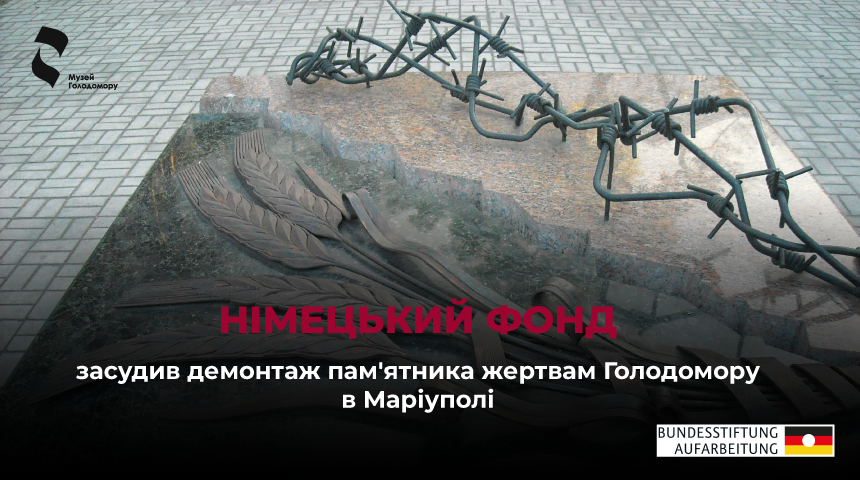 The Federal Foundation for the Study of the Communist Dictatorship in Eastern Germany condemned the dismantling of the monument to the Holodomor victims in Mariupol. It is stated in the statement of the Foundation published on the official Facebook page.

“Yesterday, the Russian occupying forces dismantled a monument to the victims of the Holodomor of 1932-1933 and political repressions in the centre of the Ukrainian city of Mariupol. According to the mass media, they want to use the granite monument as a building material,– the report says, The Federal Foundation strongly condemns this cynical act of destroying a monument of Ukrainian culture.”

The Foundation emphasizes that this is “a consequence of the policy pursued by Russia for years in the field of history, denying Stalin’s crime against the Ukrainian population and trying to erase it from collective memory.”

The foundation representatives remind us that the Holodomor in Ukraine is one of the greatest crimes of the 20th century. “For two years, millions of people were deliberately and deliberately starved to death. Stalin’s the Soviet Union did everything possible to break the resistance of the rural population to collectivization. “The ruthless confiscation of all food and seed stocks, deportations and punitive operations have resulted in countless victims, including many children,” the statement said.

The Foundation emphasizes that it was only after the collapse of the Soviet Union that it became possible to talk publicly about this crime and investigate it.