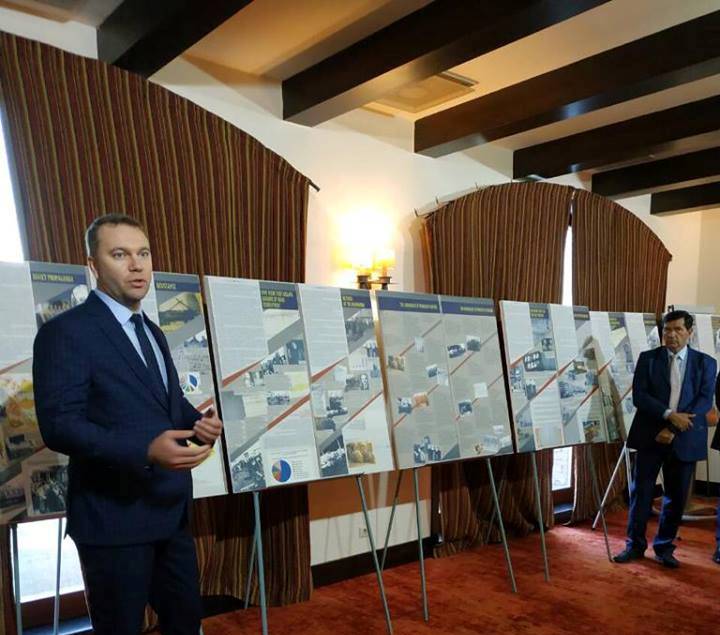 The Holodomor exhibition was presented at Maramures judetul

Within the framework of the visit of the Ambassador of Ukraine to Romania to the Maramures judetul, an exhibition “Ukraine 1932-1933. Genocide by Starvation” was opened, the press service of the Ukrainian Embassy in Romania informs.

Ambassador of Ukraine to Romania during his official visit to Maramures judetul opened the exhibition “Ukraine 1932-1933. Genocide by Starvation”, created by the Ukrainian Institute of National Remembrance, the National Museum “Holodomor Victims Memorial “and the Ministry of Foreign Affairs of Ukraine. The event was attended by mayor of Siget Marmatsii, a deputy from the Ukrainian community in the Romanian Parliament, local journalists, activists of the Ukrainian Union of Romania, as well as representatives of local academic circles.

The exposition is open in the assembly hall of the complex Greedina Moriy. The exhibition will also be exhibited at the Memorial to the victims of communism in Siget Marmatia, as well as in the Taras Shevchenko Ukrainian Lyceum.

The exhibition will be displayed until the end of November of this year.

At the opening ceremony, the speeches were told by Ambassador of Ukraine to Romania Oleksandr Bankov, deputy from the Ukrainian community in the Romanian Parliament Mykola-Myroslav Petrecki and mayor of Siget Marmatius Horya Vasile Scubli.

There was noted the importance of honoring this tragedy in order to prevent such phenomena in the future.

Representatives of the Romanian side expressed their full support for the implementation of such projects in the future.