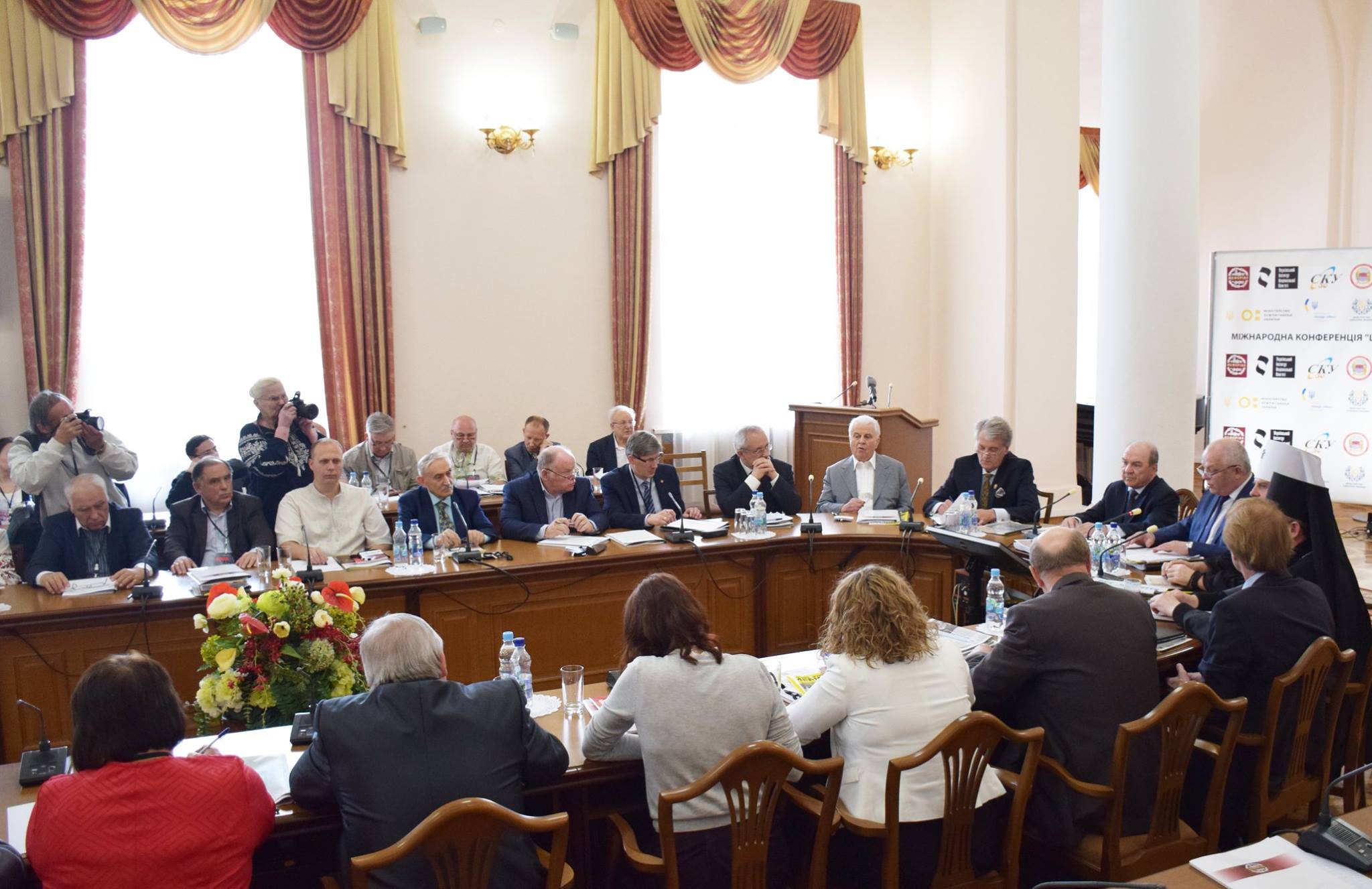 The National Museum “Holodomor Victims Memorial”, together with the Vasyl Stus All-Ukrainian Human Rights Society “Memorial”, was the co-organizer of the International Conference “Artificial Famines in Ukraine in the Twentieth Century”. It took place on May 16, 2018, on the basis of the Taras Shevchenko National University, and united 120 scientists and researchers who presented 80 research works on Holodomor-genocide of 1932-1933 and artificial mass famines of 1921-1923 and 1946-1947.

At the opening of the conference, the rector of the University Leonid Guberskyi, Bishop Ioan (Yaremenko) (UOC-KP), Bishop Bogdan (Dziurakh) (UGCC), First Vice Prime Minister of Ukraine, Minister of Economic Development and Trade, Chairman of the Memorial Society Stepan Kubiv, Director of the Representative Office of the World Congress of Ukrainians in Ukraine Sergey Kasyanchuk, diplomat Volodymyr Ohryzko, judge Viktor Scavonik, as well as reports by Professor Volodymyr Sergiychuk, prof. Volodymyr Vasylenko and prof. Vasyl Marochko invited the guests. Honorable guests of the event were the President of Ukraine (1991-1994) Leonid Kravchuk and President of Ukraine (2005-2010) Viktor Yushchenko.

Especially for the participants of the conference, the Holodomor Victims Memorial presented three poster exhibitions: “We were killed because we are Ukrainians” about the Holodomor-genocide of 1932-1933, “The Artificial Famine of 1946-1947” and “The Holodomor 1921-1923”. The third exhibition is the latest; its presentation will take place on May 18th, on the International Day of Museums. It is created on the basis of archival documents from public and private collections, as well as from the Kherson Museum of Local Lore. A colored set of the exhibition “We were killed because we are Ukrainian”, in a readable format А4, received every participant of the conference.

Also, the participants of the conference were able to view the short version of the documentary film “The Robbed Land” by Canadian film director, Yuri Lugovy, who has Ukrainian origins. The film is based on archival documents, memoirs of people who survived the Holodomor, in particular in the Kharkiv region and the Donetsk region, including the territories on the border with the Russian Federation, and on the comments of leading researchers. The focus of the film is to prove the genocidal nature of the Holodomor of the Ukrainian nation. The leitmotif of the film is the thesis that the Holodomor of 1932-1933, the shooting of the Ukrainian intelligentsia, the destruction of the Ukrainian material culture were planned at the Central Committee of the CPSU (Bolshevik) in the Kremlin for the purpose of physical destruction of the Ukrainian nation and were personally headed and controlled directly by Stalin, Kaganovich and Molotov.

The main work of the conference was held in three sections, which were also attended by researchers of the National Museum “Memorial to the Holodomor victims.” In particular, Yana Bedyk prepared a report and an article on the topic “The Law on Five Ears”: Its Causes and Implementation”, Mykhailo Kostiv spoke on the topic “Bread Purchasing Campaign in Chernigiv Region (based on the materials from the local press) in 1932”, and Nina Lapchynska, in addition to being a moderator of one of the sections, presented the report “Mass Infantry as a Constituent of the Crime of Genocide of the Ukrainian Nation”.

At the conference, researchers published a number of newly discovered documents about the causes, circumstances and consequences of the genocide of the Ukrainian people. Leonid Kravchuk and Viktor Yushchenko said they believe that Verkhovna Rada should adopt a law that will determine the criminal and administrative liability for those who scorn the memory of the victims of the genocide.

During the conference the Resolution was signed. It proposes that the term “victims of the Holodomor”, which covers people who suffered from hunger and genocide, should be also adopted in scientific and social terminology. It is also recommended to use the term Holodomor – genocide of the Ukrainian people, whose victims were at least 7 million people in the work of local government, educational institutions. Also, the participants of the conference initiated the creation of the National Institute for the Holodomor Research.

During the conference, a proposal was made to appeal to the Ministry of Justice of Ukraine to work out a legal mechanism for paying compensations to the Holodomor victims and their family members at the expense of the Russian Federation as successor to the Soviet Union. How it should happen is still unknown. Despite at this time the European Court of Human Rights may help, but the events have taken place so long ago that proving something, finding real witnesses and winning a case will be extremely difficult.

The closure of the conference was held at the Club of the Cabinet of Ministers of Ukraine, where the closing speech was made by the chairman of the Ukrainian Institute of National Memory Volodymyr Vjatovych, Minister of Education and Science Lilia Grinevich, Minister of Culture of Ukraine Yevgeniy Nyschuk, Director of the Research Institute of Ukrainian Studies of the Ministry of Education and Science of Ukraine Bogdan Galayko and General Director of the National Museum “Holodomor Victims Memorial” Olesia Stasiuk.

Olesia Stasiuk in her speech told about the importance of educational work with schoolchildren, which the museum is conducting extremely actively, and noted the need for closer communication with the Ministry of Education and Science of Ukraine: “The Ministry sets the tone for Ukrainian educational policy, and we, like other museums, are ready to implement it. Nobody will better explain the period of the war than the National Museum of the History of Ukraine in the Second World War, nobody will tell about Ukrainian art better than the staff of the art museum, and we, the Museum of Holodomor, are ready to help teachers to inform about the genocide. “

Olesia Stasiuk proposed to hold a seminar for school principals and executives in the autumn of 2018, in conjunction with the Ministry of Education and Science, the Museum and the Institute of National Memory, in order to clarify the need for teaching about genocide, “since most directors of schools and history teachers are in need of great educational work. » She also noted that on December 9 this year, pasts exactly 70 since the UN General Assembly adopted the Convention on the Prevention and Punishment of the Crime of Genocide, authored by a well-known lawyer, author of the term “genocide” Raphael Lemkin, who called the Soviet genocide in Ukraine is a classic example of genocide in 1953.

“And I would like the country in which this genocide was committed, paid tribute to this author and this document”, – summed up his speech by the museum’s director.

At the end of the conference, certificates of grants for research on Holodomor were presented. They were given to historians Andrei Blianovsky (I. Kripyaykevych Institute of Ukrainian Studies, Lviv), Anna Kapustian (Kremenchuk), Mykola Zerkal (Institute of History, Political Science and Law, Sukhomlynsky Mykolayiv National University, Mykolaiv) and Volodymyr Sergiychuk (Taras Shevchenko Kyiv National University).

Volodymyr Serhiychuk and Roman Hrytskiv were also awarded with the Honorary Diploma of Verkhovna Rada of Ukraine for special services to the Ukrainian people.  For active personal contribution to the restoration of historical truth and the commemoration of historical memory and victims of totalitarian regimes they received the Awards of Prime Minister of Ukraine Eugene Hryniv, Kateryna Kononenko, Andriy Kravets, Ivan Okoev, Ivan Patrylyak, Tetyana-Tamara Solovey, Vasyl Shenderovsky and Igor Yakubovsky.