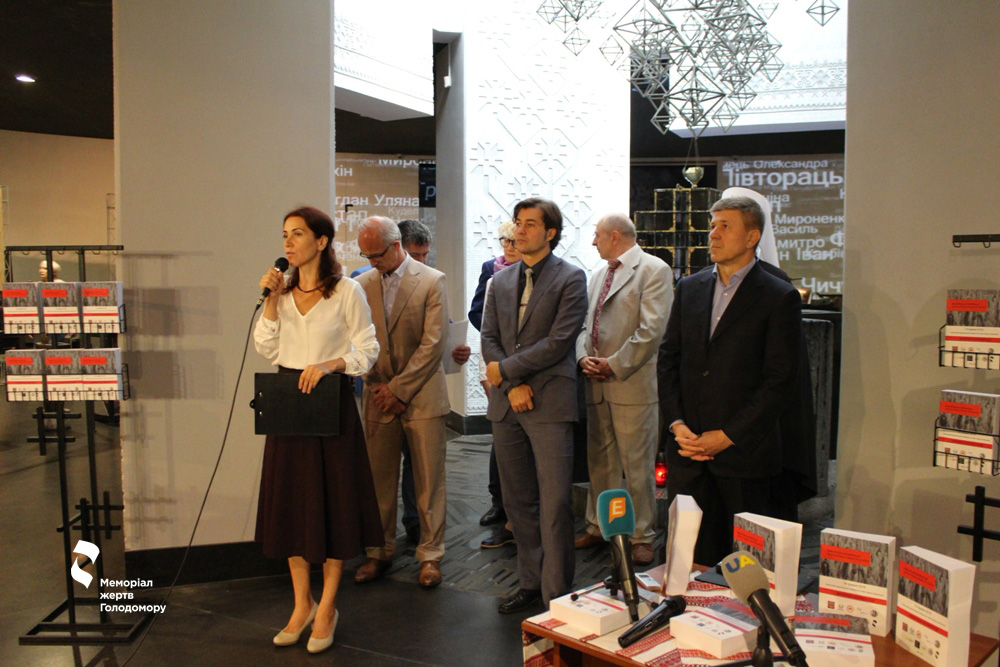 Researchers of the Holodomor in Ukraine in 1932-1933 say that some historians have tried to convince the Ukrainian and international community in a much smaller number of victims of the crime of the Stalinist regime, the genocide of Ukrainians, than it has been stated in many studies made by foreign and Ukrainian scholars. This was discussed during the opening of the exhibition “Holodomor-genocide in the language of numbers” at the National Museum ” Holodomor Victims Memorial.”

The main purpose of the exhibition is to draw attention of the publicity to the problem of various quantitative indicators of Holodomor victims in Ukraine and to prevent attempts to deny the fact of genocide against Ukrainians in 1932-1933.

“To name the exact number of victims of the Holodomor-genocide against the Ukrainians is impossible to any historian. The reasons lie, first, in denying the crime itself, and, second, in concealing the archival sources and falsifying the statistical material by the Soviet authorities and its successor – Russia.

“For several years, we see the efforts of some scholars to put the end to the question: “How many people were killed during Holodomor?” And what is more, they want to put this point at a loss of 3.9 million. We decided to prepare an exhibition that will show different approaches to the estimates of losses from Holodomor, starting from 1933 and by 2018, ” said Olesia Stasyuk, General Director of National Museum “ Holodomor Victims Memorial”, Ph.D.

The exhibition will speak with the visitor by the numbers of official Soviet statistics, including the results of the all-Union census of 1926, including the repressed one in 1937, and the falsified one in 1939. The views of the witnesses of the crime are presented, containing those who survived the Holodomor, foreign journalists and diplomats, Ukrainian and Russian demographers, historians, and numerous researchers.

According to the organizers of the exhibition, Soviet historians said about 2.5 – 3.5 million victims of the Holodomor in Ukraine. However, later, since secret documents from the state archives of the former USSR were made available and researchers began to study the crime of Soviet power against the Ukrainian people more widely, scientists say about the number of victims from 6.8 to 7.5 million.

“Unfortunately, there is a group of scholars who are beginning to talk about the 3.9 million victims of the Holodomor in Ukraine. And they think their opinion is the only correct one. It is important that the same number (3.9 million victims) coincides with the conclusions of Soviet scholars who initially denied the crime of Soviet power against Ukrainians.

Holodomor of 32-33 years fully complies with the 1948 International Genocide Convention. The Soviet government intended to destroy the Ukrainians. In addition, Holodomor is recognized as the genocide of Ukrainians in accordance with the decision of the Ukrainian court.

At the exhibition “Holodomor-genocide in the language of numbers,” quotes and data from both the organizers of the Holodomor and scholars who investigated and wrote about this crime were quoted. About 6.8 – 7-10 millions, about a third of the population of Ukraine at that time, –  different numbers of victims are named. But the objective one is about 7 million deaths of Ukrainians,” said Ivan Vasiunyk, the chairman of the Public Committee of commemoration the victims of Holodomor-Genocide. For 20 years he has been engaged in the task of preserving the memory and disseminating information about the history of Holodomor.

The researchers called to continue the research on Holodomor in Ukraine in 1932-1933, as well as to appeal to the authorities to resume work begun in 2008 on the National Book of Memory – to reprint the martyrologist, which includes the names of the victims of the Holodomor. In addition, the General Director of Holodomor Victims Memorial, Olesia Stasiuk, announced the all-Ukrainian seminar for school principals and methodologists on the teaching of Holodomor in schools. This is a mutual project of the Ministry of Education and Science of Ukraine and the National Museum of the Holodomor Victims Memorial.

The Minister of Culture of Ukraine Yevgen Nischuk also added, that the study on Holodomor in Ukraine should be continued.

“For too long time the greatest tragedy of the 20th century – the Holodomor-genocide in Ukraine – was banned and forbidden to speak about. Now it is possible to put any points in determining the number of victims. In one year, 45 or 60 children sat down at the desk, and in the following year there were 6, 4, 5 children behind these desks. And there is still no confirmation on them. And those are millions! How many children weren`t born? We can not reduce the scale, because it is not humanistic. Therefore, discussions, scientific research should continue. And the events like this, exhibitions, conferences, collections of the materials of these conferences on the Holodomor must be created “, – said the Minister of Culture Yevgen Nischuk.

A great contribution to the study of Holodomor in Ukraine in 1932-1933 is made by All-Ukrainian Human Rights Protection Organization Memorial named after Vasyl Stus. In particular, until the 85th anniversary of Holodomor, the organization published the collection of materials of the International Scientific Conference “Artifical Holodomor in Ukraine of the Twentieth Century”, which took place in Kyiv in May 2018.

“Representatives of the government acknowledged that human losses in Ukraine only amounted to 9 million souls. In the university environment, it was spoken about 40-50% of the total population of Ukraine, and I consider this figure (15-16 million) more precise. “

From the announcement of Sergio Gradenigo, Vice-Consul of the Kingdom of Italy in Kharkiv. June 22, 1933

To recall, November 24, 2018 is the 85th anniversary of Holodomor in Ukraine in 1932-1933. In order to honor the memory of the victims of genocide and spread the truth about this terrible crime in the world, the National Museum «Holodomor Victims Memorial” launched a number of educational and scientific events. In particular, on September 1st, the International action “Let’s burn a candle of memory”, which already has taken 12 countries of the world, has started. The action will last until November 24 – the Holodomor Victims Day and will be held in 85 countries of the world. More information about the events can be found on the museum’s website.