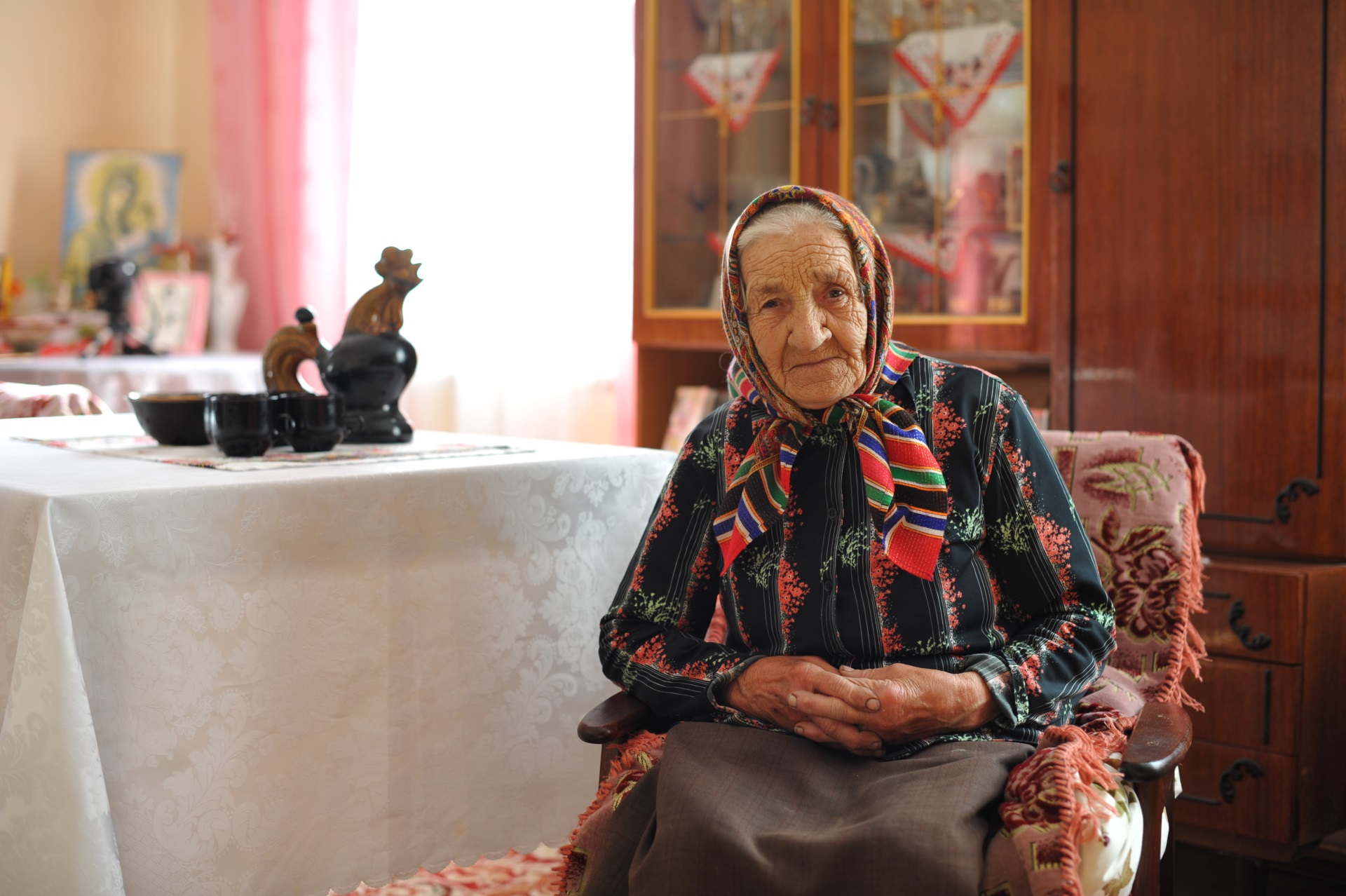 «There people were lying dead there. So nobody was burying …» – the Holodomor eyewitness

On November 16, 2017, at the Hall of Memory of the National Museum “Holodomor Victims Memorial” a meeting was held with people who survived the horrors of the Holodomor as eyewitnesses and victims. One of the participants on this memorable event was Tamara Mykhailivna Bedrenko (born in 1928), who survived the Holodomor in the village of Kozhanka in the Kyiv region.

In September 2017, Head of the Scientific-research Department Julia Kotsur and Senior Collections Specialist, Nina Lapchynska, together with the photographer Kseniia Piliavska, visited Tamara Mykhailivna in her hometown within a program of collecting the memories of people who survived genocide in 1932-1933 in Ukraine.

Despite the childhood, the horrors of the Holodomor were remembered by Tamara Mikhailovna through the whole life: “There were three of us, we lied on the stove. And the mother, before that, made, well, I do not know from which kind of flour, made dumplings. She dried them, put into the bag and hid over the stove. This was a niche, and she put there over the stove this small bag. And then came three of them. A young women and two men. They climbed and took those dumplings. And we jumped on the stove to try to get them back.  Screaming, a noise. Because we wanted those dumplings. Mother did not give us, she hid it. And they found and took it … We so wanted to eat them! .. Then we rushed to them and tore apart that little bag, and those dumplings scattered at the mother’s kitchen. And we collected them a bit. I remember it very well… It was such a buttle!

Also Tamara Mykhailivna remembers the law on “five ears of grain” very well: “We also picked up ourselves. They were not given, we were beaten, and they circled on horses, chased us with whips and booed. They did not let us collect the ears. Although the field was already harvested”. There was no mercy also for the children: “They beat, beat (children), took them away … (children). They took them away, grabbed ears of grain from hands and threw them. Threw them on the ground, stamped down, but did not give children. Those horseback riders”.

Only thanks to mutual help people could survive in those terrible years: “We were helping each other… There were friendly people by then. There were also “activists”, those who fawned. They were in the village council. But neighbours were very friendly to other neighbours. Where, and what happened – everything was shared and communicated with each other. Now one does not say “hello” to another. Both when the Germans were here but also before –  people were good friends. They were like relatives”.

In addition to deaths from starvation in her native village, Tamara Mykhailivna recalls a forest near Kozhanka, which also became the place of the last rest of the people who hoped to escape from the villages: “In 1933. In the spring, I went to the forest with my father. I do not know why, maybe to gather some mushrooms. In the forest, here, oh, the way was done to the plant. Such pits, they took land for the path, and such valleys. People were dead there. So no one buried them… So I went there for a long time … Also skulls lied … Bones lied … No one buried … Crows took them … And people, which? Not ours, but from the station. They were coming hungry. They were going on the trains, then stopped here and there fell in the. Where they found death”.

In addition to physical destruction, the regime destroyed the spiritual foundations of Ukrainians. It was forbidden to celebrate religious holidays, the church in the village was closed: “Heaven forbid! Heaven forbid! It was out of discussion, that anybody would ever mention about the church or about this… God, it was a very big mystery. Mother taught us to pray to God, well, .. nobody heard and did not know about that… Communists…”.

Keeping memory about the Holodomor is an extremely important task. Due to eyewitnesses of this crime, contemporaries can comprehend the entire human-hating essence of the communist regime.