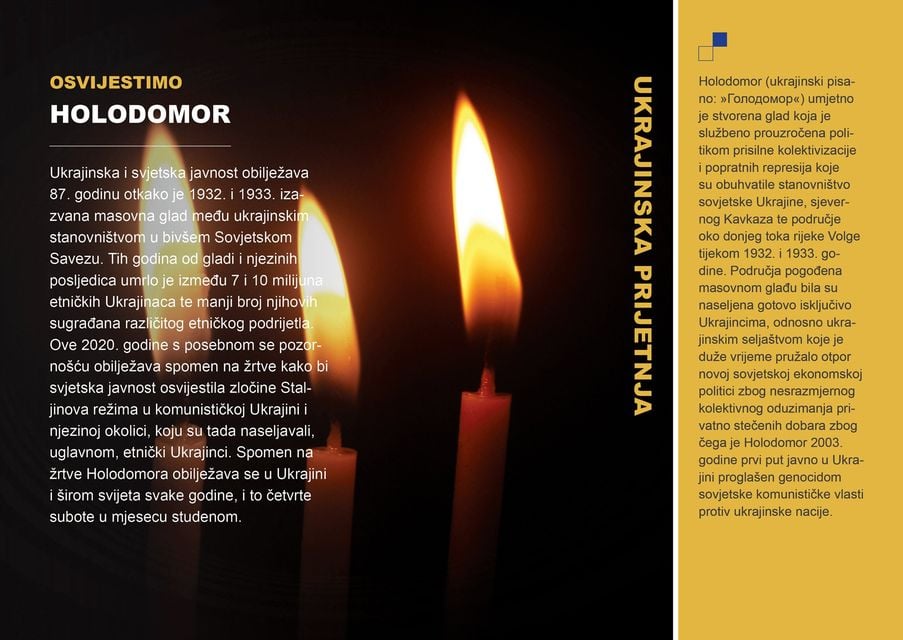 Ukrainians in Croatia called on the country’s parliament to re-include the condemnation and recognition of the Holodomor of 1932-1933 as genocide of the Ukrainian people in the agenda, Ukrinform reports, citing the Facebook page of the chairman of the Ukrainian society “Kobzar” (Zagreb, Croatia) and the deputy head of the Community of the Republic of Croatia Slavko Burda, who spoke about the Holodomor in Ukraine on the radio program “Multiculture” of the First Program of Radio Zagreb on December 5.

Burda reminded that every fourth Saturday of November people commemorate the victims of the Holodomor of 1932–1933, an artificial famine, when millions of Ukrainians, men and women and a large number of children, died of artificial starvation. “It was a crime against the Ukrainian peasantry as a class and a crime against the Ukrainian people as a nation, committed by the totalitarian communist Stalinist regime of the Soviet Union,” Burda said.

He noted that every year in Croatia, the Ukrainian diaspora joins Ukrainians around the world who honor the memory of the victims and at the same time condemn this most terrible crime in the history of Ukraine and the Ukrainian people. “Ukrainians continue to insist that all countries of the world that have not yet done so clearly qualify the Holodomor as genocide of the Soviet-communist regime against the Ukrainian nation,” Burda said.

He said that in Croatia, the Holodomor of 1932–1933 had long been an unknown term. “Most of the information received in the former Yugoslavia was selectively made public, and what was heard by experts was not popular with the public, while increasing tensions. relations with the former Soviet Union, which denied the crime. Since the proclamation of Croatia’s independence, Ukrainian-Croatian communities have been honoring the victims of this crime almost every year. The Croatian public has expressed an interest in exposing all the events of that Soviet period, and the Croatian Parliament and the Government of the Republic of Croatia should include this crime in their official qualifications for such events, “said Burda.

He thanked Croatian politician Marko Milanovic Litre for condemning the Holodomor in Ukraine in 1932–1933: “On November 27, 2020, he condemned the Holodomor of 1932–1933 in Ukraine as genocide of Ukrainians from the rostrum of the Croatian Parliament (for the first time!)”