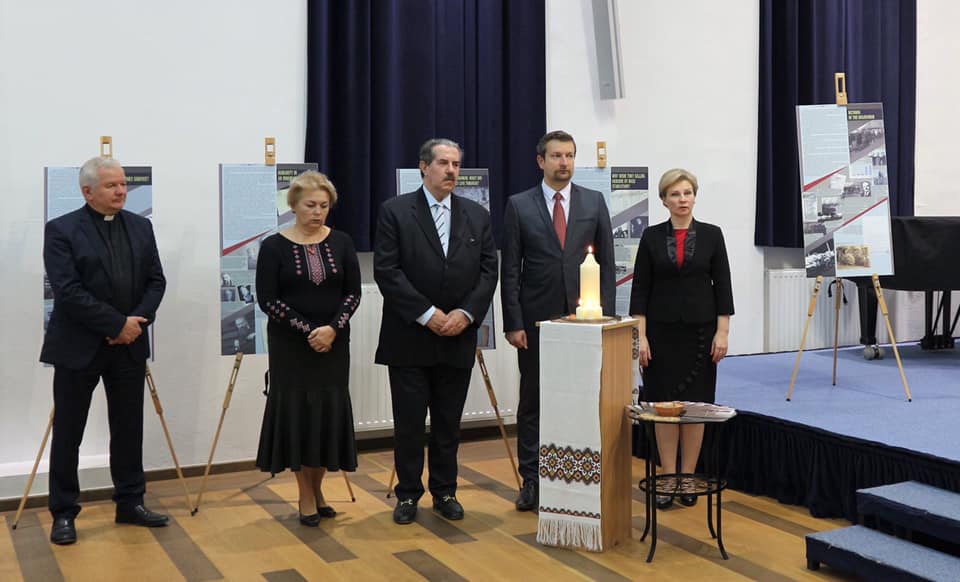 An Exhibition about the Holodomor Was Presented in Hungary

On November 13, an exhibition was opened in Szeged (Hungary), which in photos and documents tells about the Holodomor in Ukraine of 1932–33, the press service of the Ministry of Foreign Affairs of Ukraine reports.

An event began with an excerpt from Oles Volia’s book “Snowstorm”, a Hungarian-language translation of which was published this year by the Ukrainian Culture Society of Hungary with the financial support of the Ministry of Foreign Affairs of Ukraine.

The participants of the event were addressed by Bishop of Szeged-Canad Region Laszlo Kish-Rigo, Deputy Secretary of State of the Ministry of Foreign Affairs of Hungary Andras Barani, Honorary Consul General of Ukraine in Szeged Sándor Rovt and Chairman of the Self-Government of Szeged Ukrainians Natalia Shaitosh-Zapotechna.

Ambassador Extraordinary and Plenipotentiary of Ukraine to Hungary Liubov Nepop in her speech reminded that the deliberate genocide of the Ukrainian people by the Stalin regime was a punishment for Ukrainians for their unwillingness to accept Soviet power. The ambassador reminded that 10 million Ukrainians became victims of the Holodomor, and in the spring of 1933, 17 Ukrainians were killed every minute, 1000 – every hour,  and 25 thousand – every day. “This crime against the Ukrainian people became possible because the international community was silent. The purpose of the current Russian aggression is also the desire to deprive the Ukrainians of their independent future by regaining control of Moscow. But now we have the international support to restore our territorial integrity and peace, upholding the right to choose the path of development of our country,” said Liubov Nepop. She also thanked Hungary for recognizing the Holodomor as genocide of the Ukrainian people in 2003 and for supporting EU sanctions against the Russian Federation for aggression against Ukraine. The ambassador recalled that the Holodomor monument was unveiled here, in Szeged, last year.

The opening ceremony of the exhibition was accompanied by a concert-requiem performed by Viktoriia Kolosova.

After the lighting of the Candle of Remembrance, Bishop of Szeged-Chanad Laszlo Kish-Rigo conducted a memorial service for the victims of the Holodomor.

The exhibition will be displayed over the next two weeks in the hall of the Szeged Cathedral.