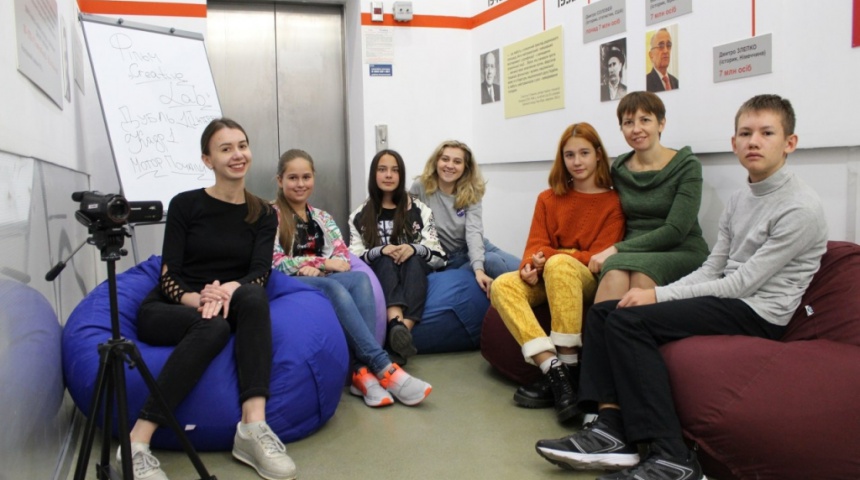 Creative Lab is a new project of the National Museum of the Holodomor Genocide created for teens and together with them.

Creative Lab for schoolchildren of grades 6–8 started working in September of 2019. During 6 lessons, the teens got acquainted with the events of 1920–30s (a turning point for Ukraine), studied causes, preconditions and effects of the Holodomor genocide of 1932–1933, and also, together with the museum team, worked on implementatio of their own ideas. At each lesson, the students became the directors, actors, scriptwriters for some time when shooting a short video on the topic they have discussed. The result of the work of Creative Lab was a short documantary “History of the Holodomor. Our Story.”

Participants could show their talents or, in contrast, overcome their fear of the camera and public speaking because the atmosphere in the Lab was friendly and originative. The project is aimed at developing a sense of responsibility and team spirit, logical and analytical thinking, getting experience in dealing with historical topics.

Lesson 1. “We Will Build Our New World…”

Why did Ukraine fail to assert its independence 100 years ago? How could the communist authorities occupy Ukraine? — these questions were discussed during the introductory session. Without understanding what the Soviet communist state was, which place Ukraine occupied in the plans of those who were building a commune state, it is impossible to understand the causes of the Holodomor-genocide crime.

Lesson 2. “The Art Belongs to the People! of Away from Moscow!”

Avant-garde art, theater, cinema, literature of Ukraine of the 20’s. This is what was discussed at the second Creative Lab meeting. We also talked about how the culture created by the Ukrainian artists was destroyed or transformed into a culture of social realism, suitable for totalitarian communist authorities.

Lesson 3. “You Can cry and Scream, but You Have to Join a Collelctive Farm!”

The Stalinist policy of dekulakization, command economy and collectivization created conditions for full state control over the life of the population. And what was the reaction of the Ukrainians? The destruction of the economic independence of Ukrainian farmers and their resistance to authorities were the direct cause of the crime of genocide and were discussed during the third session.

Lesson 4. “Sickle and Hummer are Death and Hunger”

How did the Holodomor begin? How did the authorities perform it? What were the consequences? Difficult questions, but thanks to the memoirs of witnesses and documentary sources, Creative Lab participants were able to understand the mechanism of the Holodomor.

Lesson 5. “Be Silent, Luka, and You Will Be Less Sinful”

It is difficult for contemporary teenagers to imagine that talking about the Holodomor was dangerous even to one’s own family. The Soviet authorities tried to destroy the memory of the crime as much as possible. How and thanks to whom did we manage to save it? In addition to answering these questions and learning about the Holodomor Victims Day tradition, Creative Lab participants created their own candles to join the “Candle in the Window” campaign themselves.

On the final day, parents and friends of the Creative Lab participants gathered at the museum to watch the short documentary film “History of the Holodomor. Our story.” After the screening, graduates of the laboratory received their diplomas and gifts.

Which idea will be implemented in the Creative Lab next time depends only on its future participants.

Manager of the project was Yana Horodniak.