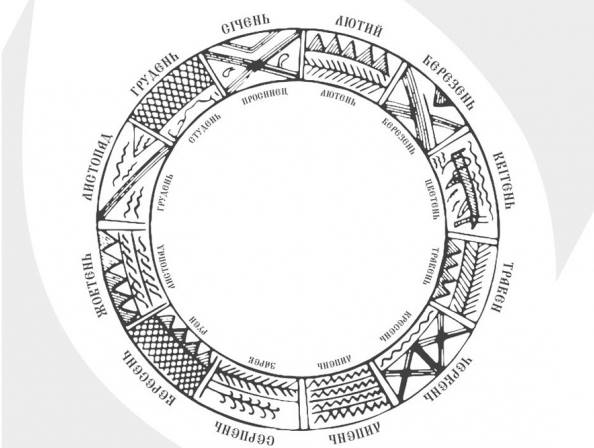 From November 22, 2017 to February 6, 2018, the National Museum “Holodomor Victims Memorial” exhibited the exhibition “BROKEN CIRCLE”, created using materials from the Museum of Books and Printing of Ukraine and the National Historical Library of Ukraine. The subject of the exhibition was the calendar of Ukrainians in traditional society and its deformation and transformation during the twentieth century: from the occupation of Ukraine by the Bolsheviks to the declaration of independence in 1991.

The exhibition included printed publications, calendars and photographs from the late 19th century to 1991.

The project was implemented as part of the museum program “Research and interpretation of the deformation of traditional Ukrainian culture”, launched in 2015, together with the exhibition project “UNBAKED BREAD”, which presented a study of ceremonial breads from all ethnographic regions of Ukraine.

We, museum staff, learn about the life of our ancestors by researching the collections of funds, archives and libraries. Ordinary things can sometimes tell more than any document. For example, a calendar. What could be simpler? However, looking at the calendars of the twentieth century, we learn a lot about the life of Ukrainians. The calendars reflect how our ancestors lived—wealthy farmers, owners of their land and their destiny, who created cooperative farms, shared with each other the secrets of a successful harvest, learned to fertilize the land and raise purebred cattle. They observed nature and listened to it. They knew when to sow, plow, mow, graze cattle, cut down trees, smear the house and barn, sow early vegetables in pots. Of course, “it is more profitable to sow with machines, row seeders”, and the stubble should be “cut so that the field does not dry out”. In winter, when there is little “housework”, one needed to subscribe to and read newspapers and magazines, especially agricultural.

In the legal departments of zemstvos they received advice, “answers to important farming questions”: how to divide property after the death of a farmer, who has the right to fish near a large river or lake, how to evict “harmful members” from the community, what to do when a neighbor put high fence near your windows, where to go if you lost your passport, etc.

Ukrainian farmers bought machinery for successful farming from local factories or ordered it from the United States, Finland, and other countries. Various technical and electrical bureaus sold the latest models of equipment—threshers, crushers, drills, separators, disc and ploughshare plows, cultivators, harrows, and even oil engines. The “most profitable” loans was gven for the instruments. In addition, they sent free illustrated catalogs on demand.

Ukrainians embroidered shirts, went to church on Sunday, worshiped God, saints and each other…

They changed holidays and rituals, the course of life and life itself. It has changed for those who survived, survived, suffered.

And today we return to the Ukrainian holidays and ask ourselves: what do modern Ukrainians celebrate? We asked our visitors about this. More than three hundred people took part in our survey. Now we know that the main holiday for most is the New Year, followed by Christmas, Easter and (importantly!) Independence Day. Ukrainians celebrate March 8 and May 9, honor the Holodomor victims and defenders of Ukraine. The process of formation of the Ukrainian calendar of holidays continues today, as well as the formation of Ukraine as an independent state.

What kind of state it will be, depends only on us.