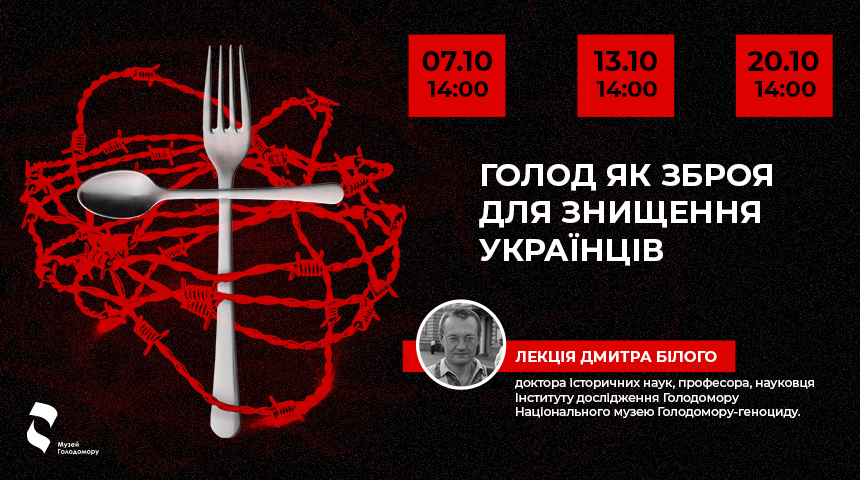 “Hunger as a weapon for the destruction of Ukrainians”: public lectures of the Holodomor Museum

“The best Ukrainian chernozems in the world are eternal

the blessing of Ukraine, and its eternal curse,”

The entire history of mankind is centered around the solution of the main issue – survival and, accordingly, control over resources, first of all, food. It is food that ensures the vitality of a certain human community, its strengthening and survival. At the same time, the deprivation of such resources gives the conquerors a formidable, absolute weapon for war and control of the territory and the people who inhabit it.

There was always a war for the fertile Ukrainian lands, because the neighbors had neither such resources, nor such a landscape, nor such a climate. Ukrainians constantly had to defend their culture, their way of life, their fertile soils with weapons in their hands.

One of the most tragic stages of this struggle was the Holodomor of 1932-1933, when the communist totalitarian regime, seeking to destroy the resistance to the “red occupation”, starved millions of Ukrainians. We are witnessing the continuation of the “intimidation with hunger” policy today: the Russian army steals grain and agricultural machinery, and deliberately burns fields with crops. In this way, the Russian Federation is trying to intimidate not only Ukraine with hunger but countries that depend on Ukrainian food too. All these desperate steps are Russia’s attempt to inflict as much damage as possible on the Ukrainian economy, to try to subdue Ukrainians with possible starvation once again.

In fact, Dmytro Bilyi, doctor of historical sciences, professor, and scientist of the Holodomor Research Institute of the National Museum of the Holodomor-Genocide will talk about how and for what purpose Moscow has been using hunger as a weapon to destroy Ukrainians for a century on October 7, 13 and 20.

Lectures start at 2:00 p.m. in the Hall of Memory of the National Museum of the Holodomor-Genocide (Kyiv, 3 Lavrska St.). The events take place as a part of the information and exhibition project “WHY DOES RUSSIA STEAL GRAIN? (Non) New History of Crime”.

During the event, visitors will be able to familiarize themselves with the exhibition “WHY DOES RUSSIA STEAL GRAIN? (Non)new history of crime” and discuss it with the lecturer.

Admission to the lectures is free.