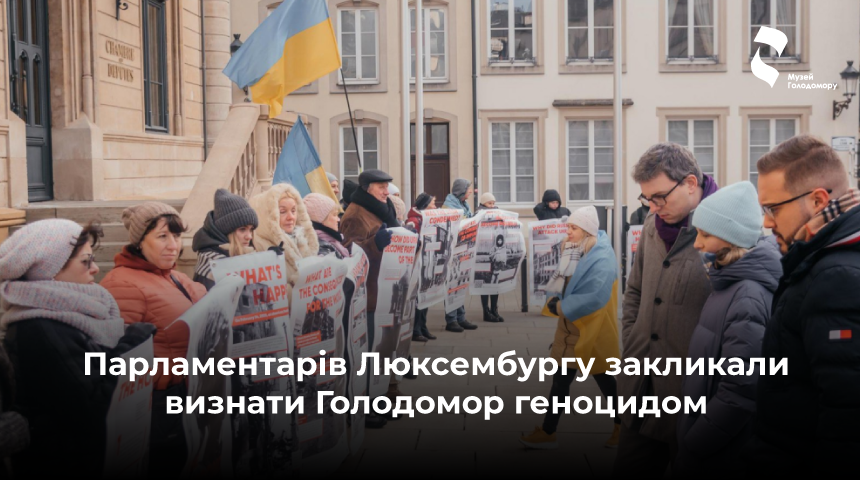 On Tuesday, December 13, representatives of the Ukrainian diaspora organized an information campaign near the Parliament of Luxembourg. In the framework of the campaign, they sent an appeal to the country’s parliament with a call to recognise the Holodomor as an act of genocide against the Ukrainian people and to recognise Russia as a terrorist state for its current actions in Ukraine. The LUkraine asbl community announced it on Facebook. Also, during the action, the exhibition “The Uncondemned Genocide of Ukrainians Repeats” prepared by the Holodomor Museum was shown.

In order to attract the attention of parliamentarians, representatives of the Ukrainian diaspora set up a tent where the deputies and everyone else could taste the dishes of the Holodomor of 1932-1933 in Ukraine. Deputies approached the tent with curiosity and tasted the dishes that Ukrainians had to eat in 1932-1933 to survive. Activists offered them zateruha (cakes baked from flour and ground tree bark), palianychka (baked shredded potato waste with the leftover grain), and soup made from weeds and potato husks.

“We organized a campaign about the Holodomor with a tasting dishes that Ukrainians could afford to eat during 1932-1933 in front of the Hall of Deputies in order to explain to the deputies of Luxembourg that Russian terrorist actions against Ukrainians began a long time ago and the genocide has been going on for many years, I hope this will help to accept the decision to recognise Russia as a terrorist state, as other EU countries have already done,” the post reads.

“It’s time to call a spade a spade… The Holodomor is a genocide of the Ukrainian people, and Russia is a terrorist state!” LUkraine asbl Vice President Inna Yaremenko wrote on her social media page (Inna Yaremenko).

“We have tolerated Russia for too long, and now as a result we have a full-scale war. Together, we must stop terrorist acts once and for all, in order to prevent them from repeating again and again and spreading to Europe,” the LUkraine asbl community emphasizes.

It is worth reminding, on November 26, commemorative events were held in Luxembourg to honour the victims of the Holodomor genocide in Ukraine.