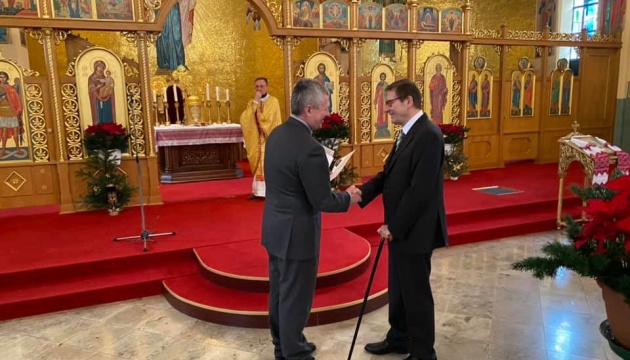 In Munich, the letters of gratitude were given to the activists of Ukrainian community of Bavaria for participation in the  Audio Guide for Everyone International Project about the 1932–33 Holodomor in Ukraine.

Consulate General of Ukraine in Munich informed on this at their Facebook page.

“On Sunday, in the Church of the Intercession of the Blessed Virgin, the gratitudes from the National Museum of the Holodomor-Genocide in Kyiv were given to the activists of the Ukrainian community of Bavaria, who took part in the Audio Guide for Everyone International Project and translated the text of the tour into German.”

General Consul of Ukraine Yurii Yarmilko thanked the volunteers Mykola Frankevych, Nataliia Tkachuk, Nataliia Mykhailova, Michael Dobrjanskyj, Nadiia Savchenko, and Olena Zöllner for “their help in important affair of bringing the information about the crimes of the communist regime against the Ukrainian nation to foreign audience.”

The Consulate General also thanked inerpreter and philologist Christian Weise for proofreading the translation and recording the text. “His voice will tell the German-speaking guests of the museum about the Holodomor in Ukraine in 1932–1933,” the statement said.