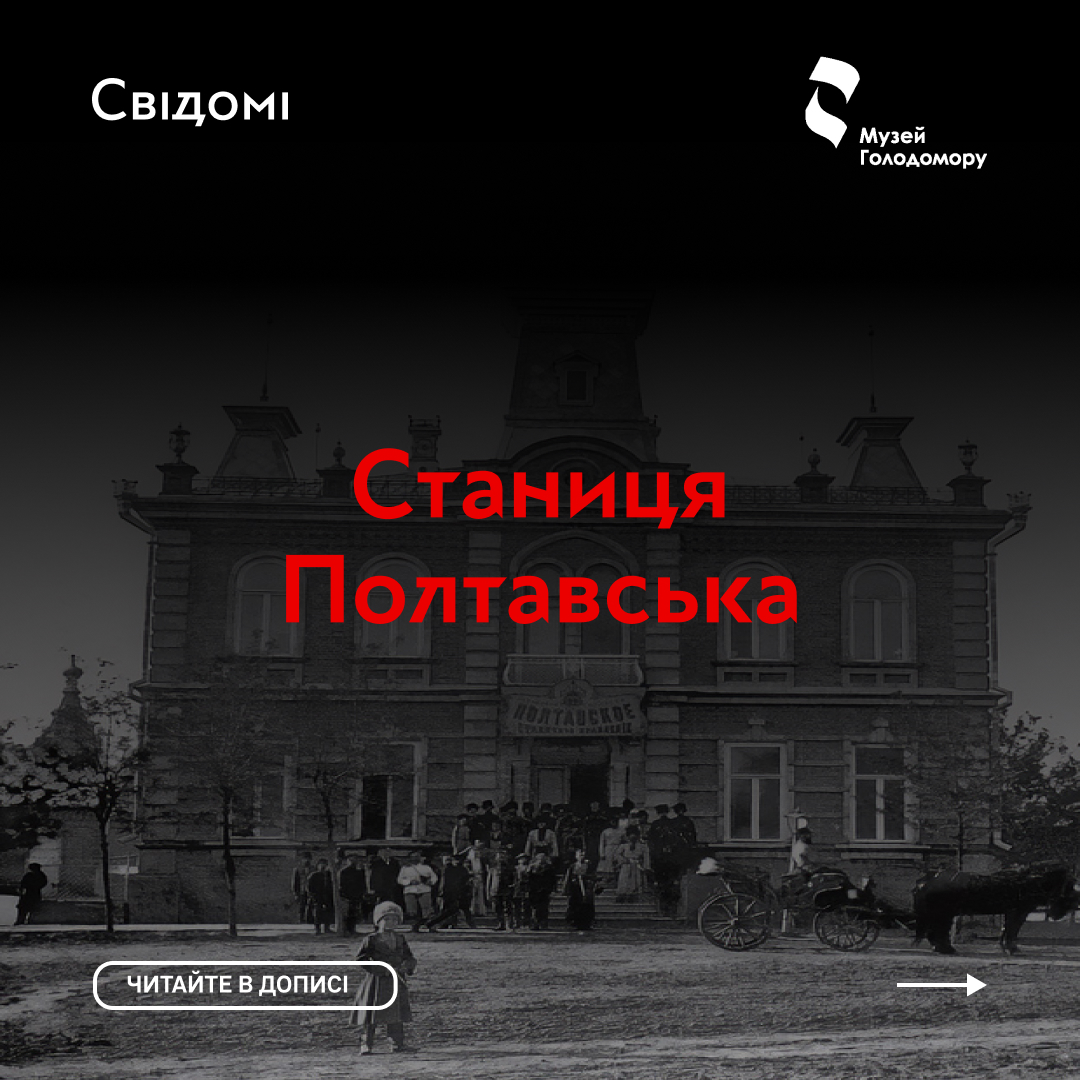 In the infamous resolution of the Central Committee of the All-Union Communist Party of Ukraine (B) and the USSR Central Committee “On grain procurement in Ukraine, the North Caucasus and the Western Regions,” dated December 14, 1932, Stanytsia Poltavska in the Kuban was mentioned as a separate item, and all  inhabitants must be evicted immediately.

а) evict as soon as possible to the northern regions of the USSR from the village of Poltava (North Caucasus), as the most counter-revolutionary, all residents, except those truly loyal to the Soviet government and not involved in the sabotage of grain harvests, collective farmworkers, and sole proprietors, and populate this village with conscientious collective farm workers-Red Army soldiers who work in conditions of small land and on inconvenient lands in other regions, transferring to them all the lands and winter crops, buildings, inventory and livestock of those who are being evicted.”

“On grain procurement in Ukraine, the North Caucasus

Why did the stanytsia fall out of favour with the totalitarian regime, and how were its inhabitants punished? Was it the only village through which a wave of repressions and deportations swept through? And what did it lead to?

From the history of Stanytsia Poltavska

Stanytsia Poltavska (now the Krasnodar region of the Russian Federation) was founded in 1793–1794 by Zaporizhzhya Cossacks, who moved to the Kuban. Initially, it was called Poltavsky kurin, inhabited by former Cossacks of the Poltava kurin of Nova Sich. In 1842, it received the status of a stanytsia.

From 1917 to 1921, Poltava supported the Kuban People’s Republic, as its population (mainly Ukrainian Cossacks) had a high level of national consciousness. Stanytsia resisted the power of the Bolsheviks for a long time: the partisan national liberation movement existed here at least until 1925.

In 1918, the local pedagogical seminary (later the technical school), on the initiative of students, teachers, and the local population, was the first in the Kuban to switch to the Ukrainian language of instruction. It was here on September 5, 1921, that the Ukrainian politician Mykola Mikhnovsky became a teacher.

Until 1932, all schools in the village taught in the Ukrainian language. It had its own bandurists’ chapel and a Ukrainian drama group.

The freedom-loving and Ukrainian spirit of Stanytsia Poltavska eventually became its sentence.

“Taken to God knows where…”

The first repressions began in Stanytsia in 1929-1931 – 300 families were deported from Stanytsia Poltavska, and hundreds of people were arrested and tried for failure to fulfil grain procurement.

In 1932-1933, the village was on the “blackboard” because it did not cope with the grain procurement plan. After that, the repressions became total: “The next morning, they brought up an empty echelon. Everyone, young and old, was ordered to leave their homes and load into the wagons. So all the inhabitants of the village were taken to God knows where…,” the breeder Pavlo Lukyanenko recalled.

According to historian Volodymyr Serhiychuk, the first 208 families from Stanytsia Poltavska in the amount of 1,097 people were deported from December 5 to 7, 1932, that is, even before the infamous decree of December 14.

And on December 19, 1932, 2,158 families totalling 9,187 people had already been evicted from Stanytsia Poltavska. Deportation continued until almost the entire Ukrainian population was evicted from the village to Siberia.

The fate of Poltavska in January 1933 also befell other villages in the Kuban. In particular, the entire Ukrainian population was also evicted from Umanska and Vedmedivska. Deportations also partially covered Novo-Rozhdestvenska, Platnyrivska, Beisugska and Plastunivska villages. In total, the number of evicted from these villages was 63,500 people.

From 1930 to 1933, according to various sources, about 300,000 people were deported from the North Caucasus, two-thirds of them from the Kuban and, mainly, precisely from the areas inhabited by Ukrainians.

Inhabited villages and fertile lands of the Kuban were settled by Russians. In October-December 1933, 14,000 households of collective farmworkers, ethnic Russians, and demobilized Red Army soldiers were resettled from the western and northern regions of Russia to the Kuban.

Stanytsia Poltavska, newly settled by the Red Army, was named Chervonoarmiyska, and Umanska was renamed Leningradska. The historical name of the village was returned to Poltavaska only in 1994.

Thus, the Holodomor and deportation changed the ethnic composition of the Kuban population in favour of the Russian ethnic element. At the same time, Ukrainization was halted in the region, and the reverse process of integration began. Education in schools and office management were translated into the Russian language. The Ukrainian-language press and radio disappeared.

Today we see a similar policy of Russia – thousands of Ukrainians are forcibly deported to the depressed northern regions of the Russian Federation from the temporarily occupied territories of Ukraine. There is no doubt that Russia plans to settle the lands “liberated” from Ukrainians with Russians, to talk about “originally Russian lands” later.

That is how it is happening in the temporarily occupied Crimea: during the eight years of occupation, up to a million Russians moved there.

“The policy of local authorities is aimed at evicting both Crimean Tatars and ethnic Ukrainians out of Crimea and populating these territories with Russian citizens. Currently, there are already a million such citizens who have illegally settled in Crimea,” Refat Chubarov, head of the Mejlis of the Crimean Tatar people, emphasizes.