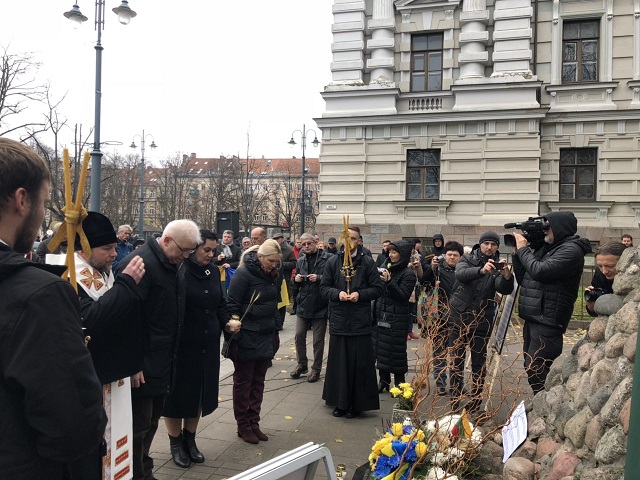 "Let's Light a Candle of Memory!" Action in Vilnius

This year, the International Action “Let’s Light a Candle of Memory!” in the center of the capital of Lithuania has united a huge number of participants. Among them were Ambassador of Ukraine to the Republic of Lithuania Volodymyr Yatsenkovskyi with his wife, staff of the Embassy of Ukraine in the Republic of Lithuania, the head of the Ukrainian community in Vilnius Natalia Shertvitene, the active participants of Ukrainian community in Vilnius, representatives of the Kaunas Ukrainian Society, Director of the Center for the Study of the Genocide and resistance of Lithuania Teresa Birute Burauskaite, employees of this institution, Director of the Museum of Genocide Victims Yevhenius Peiksstanis, representatives of the Ministry of Foreign Affairs, of accredited diplomatic corps in Lithuania, socio-political movement Sąjūdis, unions, political prisoners and repressed Lithuanians, Lithuanian public. The event was attended by children of Ukrainian class who came to Lithuania from the territories of Donetsk and Luhansk regions under the control of the Government of Ukraine for training, during the full academic year, with the support of the Government of the Republic of Lithuania, at the international school “Vilnius Lithuanian House”, as well as teachers of the school.

The events were highlighted by the journalists of the leading television channel of the Lithuanian National Television “LRT”.

Presenters paid homage to the victims by the joint prayer, conducted by the Bishop of the Kharkiv Exarchate of the UGCC Father Vasyl Tuchapets together with the priest of the Church of the Holy Trinity of Vilnius Father Vincentyi Pelykh, other priests of the UGCC, who arrived in Vilnius from Poland, Belarus, and Ukraine.

The Ambassador of Ukraine to the Republic of Lithuania V. Yatsenkovskyi appealed to the participants of the event. In particular, he drew the attention of those present to the fact that the whole world, starting from September this year, commemorates the victims of Holodomor in Ukraine in 1932-1933. Ambassador thanked all Lithuanians for adopting the decision of the Parliament of Lithuania to recognize Holodomor in Ukraine as the genocide of the Ukrainian people in 2005, and also stressed that the Russian aggression today and the hybrid war against Ukraine are the continuation of genocide. He also thanked the Lithuanian people for the sincere strong support of our state.

Director of the Center for the Study of the Genocide and Resistance of Lithuania T. B. Burauskaite, Head of the Ukrainian Community of Vilnius, N. Shtvarkiene, Head of the Vilnius Department of Saudis, Liaonas Kererasius, in their speeches, urged the participants to mremember this terrible tragedy in order to prevent its repetition in the future. They told the participants about historical facts and research findings on Holodomor in Ukraine.

During the action, the memory of the 85 Ukrainian children who died as a result of the Holodomor of 1932-1933 in Ukraine was honored; the names of Ukrainian children from Khmelnytskyi Region were read by children of the Ukrainian class of the school “Vilnius Lithuanian House”.

All attendees took part in the ceremony of lighting the candles of memory, put flowers and ears of wheat to the memorial to the Victims of Soviet Occupation, located in the city center near the Museum of Genocide Victims and the Ministry of Foreign Affairs of the Republic of Latvia. During the ceremony, a song on the poem of Bogdan Stelmakh “The Candle” by composer Myroslav Skoryk (based on the world-famous “Melody”) was sang.

On the same day, in the Ukrainian Church of the Holy Trinity the thematic exhibition “Executed by Starvation: Unknown Genocide of Ukrainians” (in Ukrainian and Lithuanian languages), prepared by the Embassy of Ukraine in the Republic of Lithuania, together with the active participants of Ukrainian community of Vilnius, was opened.

On the same day, the Lithuanian city of Klaipėda joined the “Let’s Light a Candle of Memory!” action.