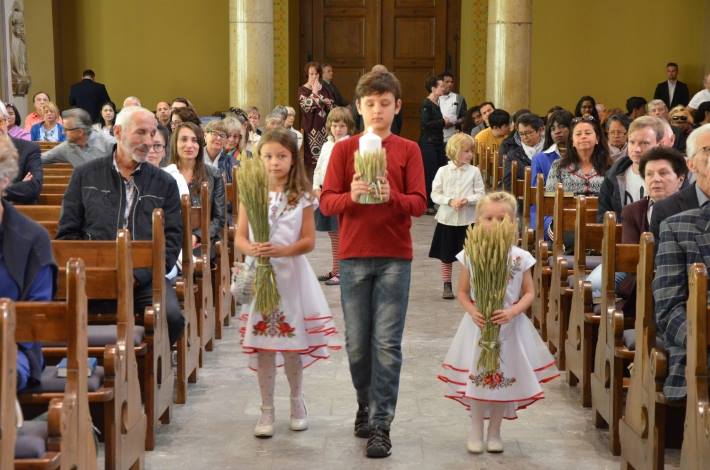 The Action "Let's Light a Candle of Memory!" in Switzerland

On October 14, in Berne and Lausanne, the events International Action “Let’s Light a Candle of Memory!” took place. The campaign is aimed to honor the memory of the Holodomor victims of 1932-1933 in Ukraine, the press service of the Embassy of Ukraine to the Swiss Confederation and the Principality of Liechtenstein reports.

In Bern, in the Church of the Holy Trinity (Dreifaltigkeitkirche) there was served a joint Ukrainian-Swiss liturgical service, as well as a memorial service, during which Ukrainian children carried the lighted Candle of Memory. Priest Volodymyr read out the names of 85 children who died during the Holodomor-genocide.

In his speech to the participants of the event before the liturgy, the Swiss priest of the Holy Trinity Church has told about the crime of the Holodomor-genocide in Ukraine. The Head of the Bern community of the Ukrainian community L. Tsuber also asked the guests of the event to pray for the Holodomor victims. All participants were given symbolic wheat spots and booklets in German about thr genocide in Ukraine in 1932-1933. At the end of the meeting, Ambassador of Ukraine Artem Rybchenko thanked the clergy and all those, who were present, for participation in the action “Let’s Light a Candle of Memory!” and for the prayer for the memory of the dead.

The event was attended by ambassadors accredited in Switzerland by Georgia, Poland, Slovakia and the USA, representatives of the Ukrainian community, the Swiss community and local media.

The “Let`s Light a Candle of Memory!” campaign also took place on the same day in Lausanne in the Church of the Sacred Heart of Christ, Sacre-Coeur, where another priest Nazarii held another memorial service, within which a candle of memory was lit and the names of 85 children who died during the Holodomor genocide were read out.