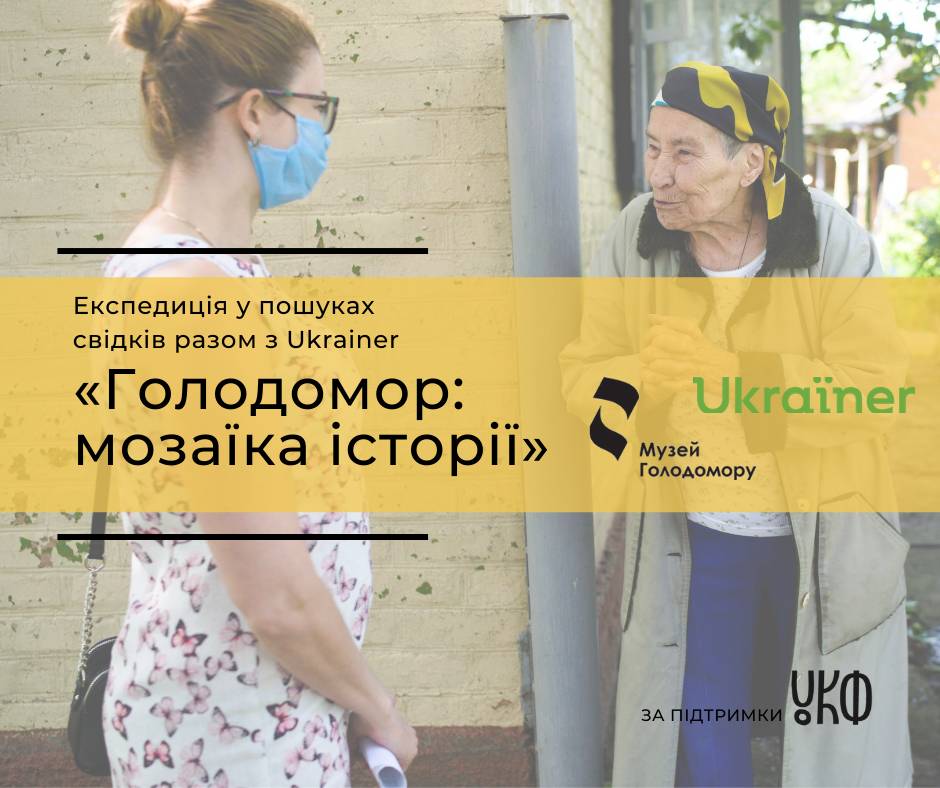 The museum team, together with the NGO “Ukrainer”, with the support of the Ukrainian Cultural Foundation, organized expedition to nine regions of Ukraine to find witnesses to the Holodomor. We recorded 120 unknown stories about the genocide of Ukrainians on video, as well as recorded 66 mass graves of victims. This project tells Ukrainians and foreigners about one of the greatest crimes of the twentieth century. It also promotes the recognition of the Holodomor as genocide abroad. Expeditions are perhaps the last chance to comprehensively explore history by communicating with witnesses and digitizing their stories.

Many stories of the Holodomor witnesses are united by the memory of how activists took the millstonse from hungry people. For many, such a seizure was fatal.
The first video of the project — the very removal of millstones — tells about a little-known page on the history of the genocide of Ukrainians.

Mariia Hurbich was 12 years old when the Holodomor began. She and her family not only survived the genocide of the Ukrainian people, but also helped the boy, who lived nearby. For many years, they met by chance.

When the Holodomor began in the village of Kobylianka, Fedir Zadierieeyv’s parents went a hundred kilometers to Belarus to bring potato peelings from their relatives. Fedir’s grandmother secretly carried potatoes in her boots, and he prepared nettle and plantain borsch for his younger siblings. So they managed to survive. Fedir recalls how before collectivization people in the village could give each other loans for six months, and during the Holodomor he himself had to steal from neighbors to live.

Marfa Kovalenko was six years old when the Holodomor began. Her family was saved by utensils from a set that was once given to their grandfather by the counts. These items were exchanged for a meager amount of food in the torgsins, so there were no Holodomor victims in the Kovalenko family.

Nadiia Koroliova was born in the village of Ivankivtsi in Podillia. She was 10 years old when the Holodomor began. This region was one of the first, where riots against mass forced collectivization, began in 1929. Outraged by the regime’s actions, Ukrainian farmers expelled government officials and activists from the villages and took control of the district centers. In 1932, the opposition of the villagers was so active that the Soviet authorities sent military troops there. The fightings sometimes lasted for several days.

When she was less than five years, Tetiana Krotova learned all the horrors of the Holodomor. She saw with her own eyes the dekulakization of her fellow villagers, ate uncrushed grains of wheat, fearing that someone would expose her. Her parents moved from place to place, working everywhere on local collective farms to somehow feed their five children. As an adult, Tetiana continued to learn from the stories of neighbors the terrible truth about the events of her childhood, which are known in the history of Ukraine as the Holodomor of 1932–1933.