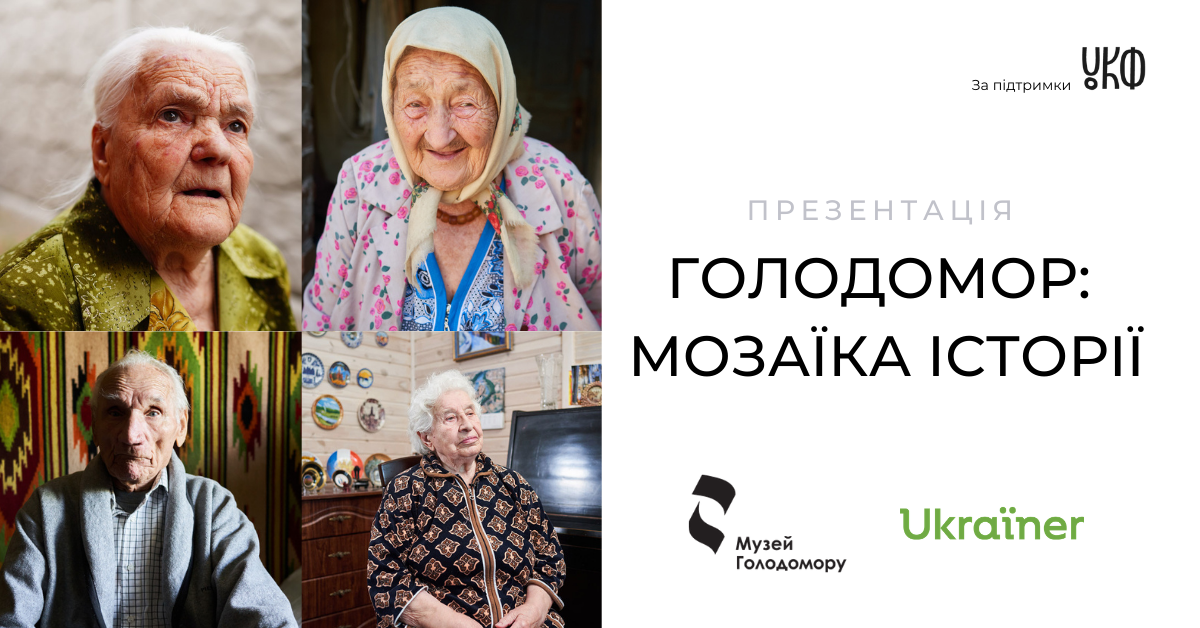 120 Stories of the Holodomor Witnesses Recorded in 2 Months: Project Presentation

From July to September 2020, the Holodomor Museum and Ukraїner carried out a large-scale expedition to Ukraine in search of Holodomor witnesses.

The project, implemented with the support of the Ukrainian Cultural Foundation, is called “The Holodomor: Mosaics of History.”

The presentation will take place on October 28 at 12:00 in the Holodomor Museum. A live broadcast of the event will be available on the official Facebook page of the Museum.

In two months, the team visited nine regions of Ukraine to find Holodomor witnesses and record their stories. For 30 days, participants visited 64 settlements in 33 districts, where they recorded the testimonies of 120 eyewitnesses of the Holodomor, talked to 50 local historians and discovered 66 mass graves for victims of genocide. During the expedition, Holodomor witnesses donated unique items to the museum that tell family stories during the genocide. Rare exhibits and their stories will be presented at the event.

Larysa Artemenko: “Each local study helps to understand the Holodomor in a particular region. We went on an expedition to Ukraine to collect as much eyewitnesses’ testimonies about the Holodomor as possible, to record mass burials, and to record interviews with local historians. Our route passed through Kyiv, Chernihiv, Sumy, Zhytomyr, Vinnytsia, Cherkasy, Kirovohrad, Odesa and Mykolayiv regions. Until now, the museum has not organized expeditions of this scale.”

The results of the project can be seen on the Youtube page of Ukraїner, and explaining texts can be read on the websites of Ukrainer and the Holodomor Museum.

Bohdan Lohvynenko: “We realized how valuable the stories of Holodomor witnesses collected during the joint expedition are, because there are so few of them left. For Ukraïner, this project is important as a mission—to record and disseminate stories from different regions that have not been heard by society for many years.”

The content is available not only in Ukrainian, but also in English—this will help popularize the topic abroad and recognize the Holodomor as an act of genocide in the world.

Mariia Hurbich from Chernihiv region: “There was one man on the road, he was walking and begging, and he was already dying. And I grazed a cow. I ran to my mother and said, ‘Mom, Opanasii is dying.’ My mother quickly brought him milk, I carried it, my hands were shaking. And he was already dead.“

She survived the Holodomor and saved a boy next door: a video story of Mariia Hurbich.

Fedir Zadereev from Sumy region: “I was collecting cherries at the cemetery. They were ripe a little. And the smell around was so unpleasant. I tore them at my bosom and suddenly looked and saw that some rags were lying and whether the arm or leg — white bones. I run away from there with all my might. Probably no one had the strength to bury. They sprinkled all in winter with a little earth, put some snow on top and that was all.”

Escaped by potatoes from Belarus: a video story of Fedir Zadiereiev.

Marfa Kovalenko from Sumy Region: “My brother studied in Romny during the famine in 1933, and he would bring such a piece of bread to his mother on Saturday. And once I was the first to take it and ate it, and he cried: ‘I was bringing it for mom!’ Then the mother shared it between herself and us, and gave most of it to us.”

Don’t take what is not yours even during the Holodomor: a video story of Marfa Kovalenko.

Nadiia Korolova from Vinnytsia region: “I told my family, and my son-in-law said, ‘I would have shot them.’ I say, ‘You wouldn’t do anything, because you would be shot worse than you would shot someone.’ No one could say anything, no one. We just observed.“

They even took away pillows: a video story of Nadiia Korolova.

Tetiana Krotova from Kirovohrad region: “The head of the collective farm caused the death of more than half of the village. “Garba” (cart for household needs), black oxen and the team—two strong men—they would go around the village every day, come to every house. Not only the dead, but also the living—well, sometimes the person would die soon—were taken to the cemetery. No pits were digged; the bodies were thrown together, and a pit was dug in 1935, and the bones were rolled into that grave with a rake.”.

To save an entire hamlet during the Holodomor: a video story of Tetiana Krotova.

All recorded stories will soon be available on the museum resource “Testimonies”.

To get more information about our projects and to support them informationally, please contact us by e-mail [email protected] or by calling 380674397507 (Olga Syrotiuk, museum communications manager).