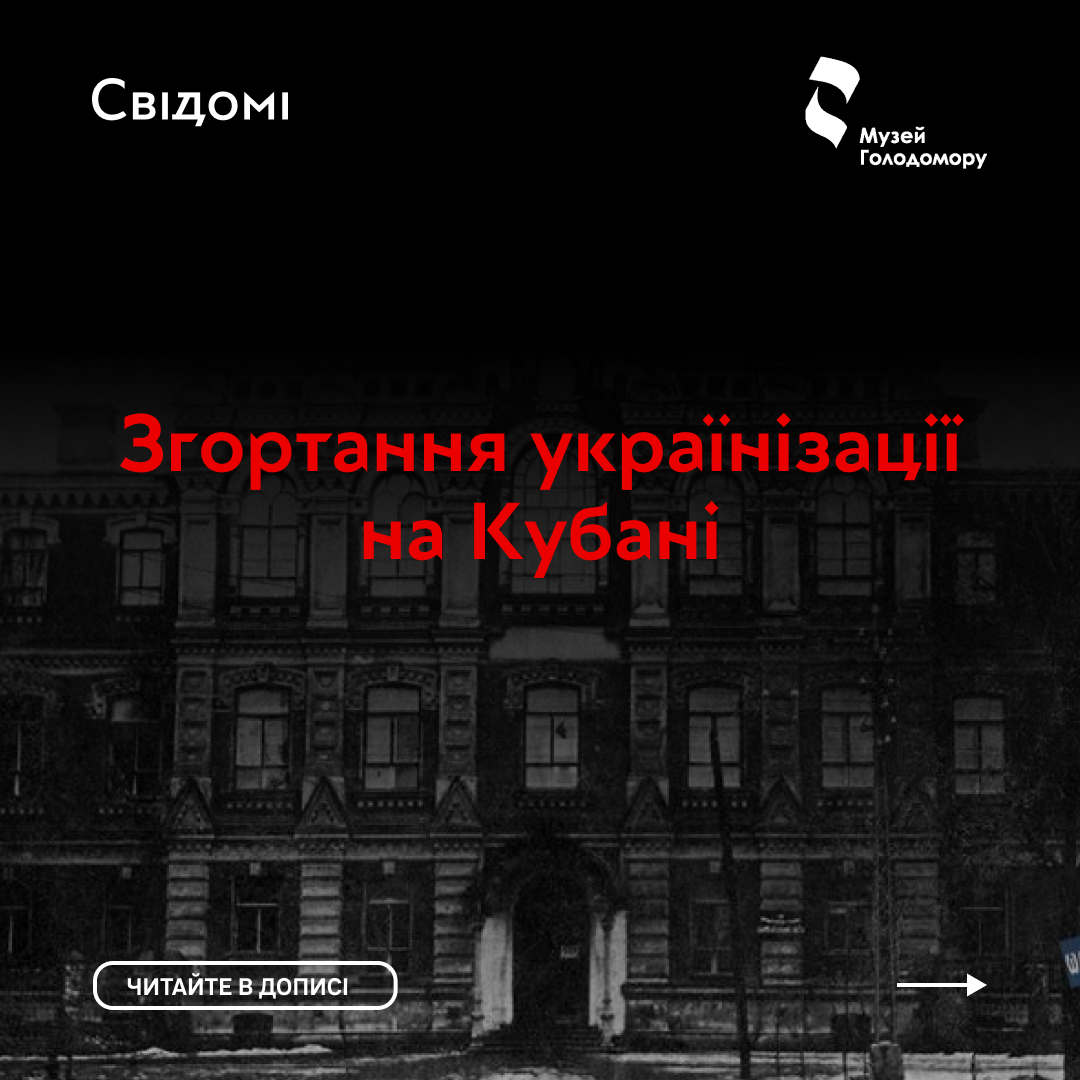 The curtailment of Ukrainization in the Kuban

Svidomi_ua, in cooperation with the Holodomor Museum, talks about how the Soviet Union broke the resistance of Ukrainians in the Kuban and Russified them.

From 1927, in the Kuban, where Ukrainians accounted for 66% of the total population (All-Union Census of 1926), the processes of Ukrainization deepened. If, before that, schools were mainly Ukrainian, now the Soviet and party apparatus, newspapers, publishing houses, technical schools, and higher educational institutions were being Ukrainianized.

The Resolution of the Central Committee of the All-Union Communist Party of Bolsheviks and the Council of People’s Commissars of the USSR of December 14, 1932, “On Grain Procurement in Ukraine, the North Caucasus and the Western Region,” finally crossed out all the achievements of Ukrainization and slowed down any manifestations of the national and cultural development of the Ukrainians of the Kuban.

The resolution ordered to immediately translate the document production of the Soviet and cooperative bodies of “Ukrainized” districts in the North Caucasus, as well as all newspapers and magazines published in Ukrainian, into the Russian language “as it is more understandable for the Kubans,” and to start teaching in Russian in the autumn.

The resolution of the North Caucasian Regional Executive Committee of December 29, 1932, was the continuation of the de-Ukrainization of the Kuban. In addition to the restrictions mentioned above, it was proposed to stop radio broadcasting in Ukrainian from January 1, 1933.

One of the newly arrived teachers of the Ukrainian Pedagogical Technical school in stanytsia Umanska wrote that on February 20, 1933, he was called by the special services and ordered to collect all Ukrainian textbooks and hand them over since the technical school was switching to the Russian language. The next day he received Russian books.

The consequences of de-Ukrainization are evidenced, in particular, by a report sent to the People’s Commissariat of Education of the RSFSR on April 22, 1933.  It stated that in all schools in the North Caucasus, teaching in Ukrainian and the Ukrainian language as a specific subject, should be stopped, and Russian should be taught instead by the spring of 1933. By March 1, 1933, teaching in 12 Ukrainian pedagogical technical schools was changed into the Russian language. During the change, the purges of the teaching staff were carried out, and as a result, they were completely updated in  Umanska and Poltavska stanytsia.

The processes of curtailment of Ukrainization and the forced Russification of Ukrainians in the Kuban were connected with collectivization and the creation of mass man-made famine, which became a component of the Holodomor genocide. In the Kuban, the presence of a united Cossack population ready to resist with weapons complicated collectivization. |In July 1932, to break the resistance, the regime resorted to a significant increase in grain procurement rates, which led to famine in these areas.

According to the materials of the article by Dmytro Bilyi, doctor of historical sciences, “Russification of the Ukrainian population in the Kuban in 1932-1933 as a component of the genocide of Ukrainians.”