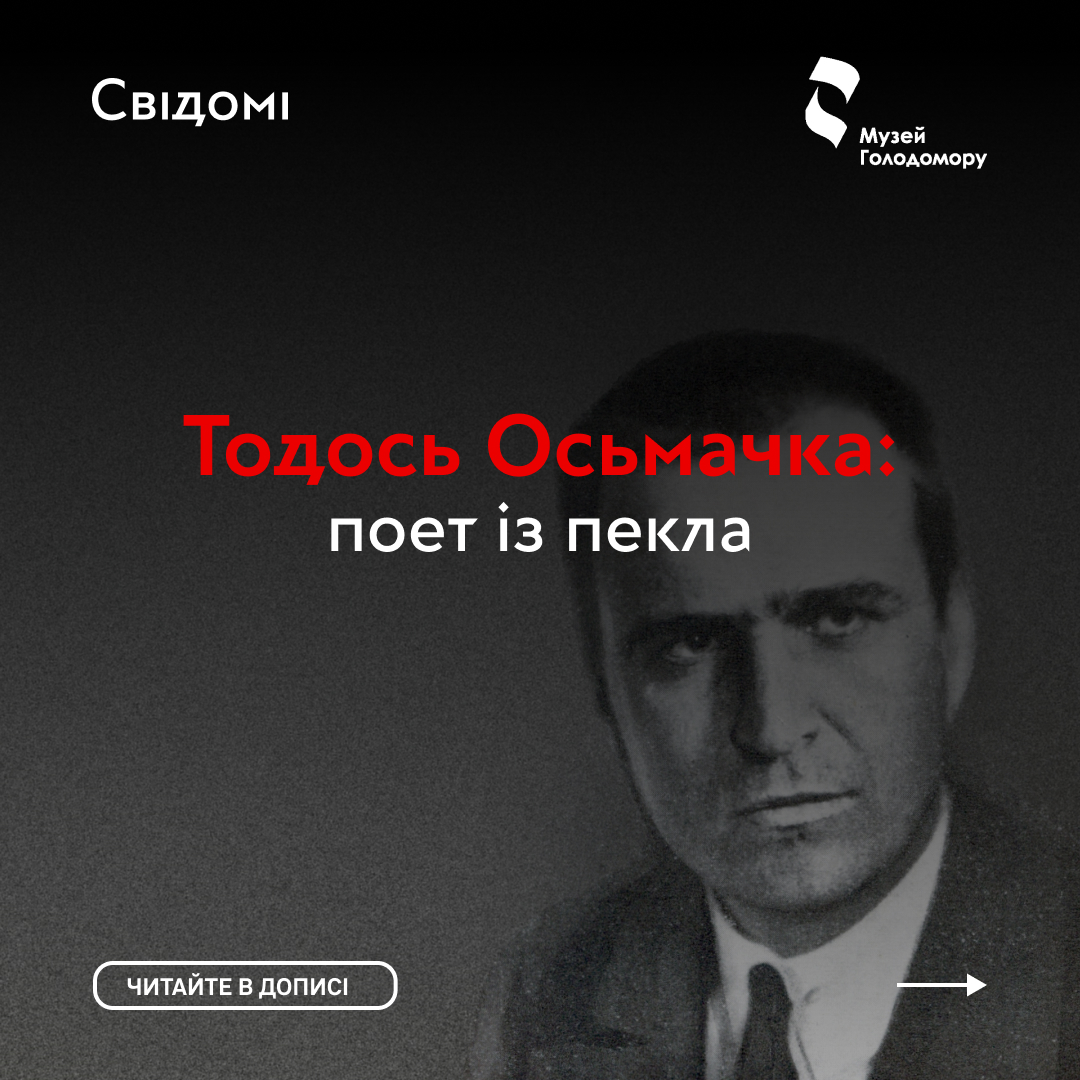 Todos Osmachka: a poet from hell

The life story of an extraordinary figure of the Ukrainization period is another fate crippled by the Bolshevik regime. Literary critic Mykhailo Slaboshpytsky called him “Poet from Hell.”

Todos Osmachka was born on May 16, 1895, in Kutsivka village, in the Cherkasy region. He began his literary activity in his 20s as a member of the group “Lanka” (later “Workshop for the Revolutionary Word“). The group united writers who rejected political opportunism. Among them there were Hryhoriy Kosynka, Valerian Pidmohylny, Ivan Bagriany, Yevhen Pluzhnyk.

In 1929, Osmachka’s collection “Klekit” (The rattling), in which he described the destruction of the Ukrainian village in the form of symbolic prophecies, caused the wrath of the Bolshevik regime.

The convoy is coming, and the stone is groaning,

The farmers are going surrounded by iron stings,

Carrying bags with bread on their shoulders,

The faces black with the arable fields,

and the ravens are making over them

Round the sun the circles of fire.

The poet had to hide but did not avoid arrest. A psychiatric hospital saved him from death. Although disputes continue till today: either was Osmachka faking his mental illness or was he really sick. He managed to escape from the hospital. And then – years of hiding, ordeals, escape from the terrible reality and himself. And understanding – after breaking out of prison, you still cannot be free since all of Ukraine is now a prison.

During the Nazi occupation in 1942, the writer left for Lviv. Years of wandering and fear affected him. Osmachka became distrustful and closed, and his suspicion turned into paranoia.

In 1944, he had to emigrate – first to Germany and then to the USA, Canada, France, and Yugoslavia. Fearing persecution by the communist totalitarian regime, he did not stay anywhere for a long time. His life was a permanent escape. However, it was in emigration that he could finally create freely. His prose works “Starshyi boiaryn” (The Best Man), “Plan do dvoru” (Annihilation, or Yard plan), and “Rotonda dushohubtsiv” (The Rotunda of Assassins) were published there. All three works are incredibly powerful and impressive, but how many people have read them in Ukraine? In particular, Yurii Shevelov, a professor at Harvard and Columbia universities, wrote about “Starshyi boiaryn”: “If Ukraine can be put into words, then it is the story of Osmachchyna.”

The work “Plan do Dvoru” is a metaphorical story about the ruin of a Ukrainian village, devastated by collectivization and famine, where Ukrainians are trying to survive. In the end, they finally lose the sense of the difference between good and evil, and instinct takes over them.

“Volodymyr Kyrylovych Vynnychenko said in one of his letters to me that it is necessary to write a story or a novel about the man-made famine in Ukraine committed by the communists. And when I was thinking about it, I came across the Bolshevik formula “plan do dvoru,” with which they terrorized Ukraine in the same way as once in Spain, during the Inquisition period, they terrorized people with the expression “autodafe.” “Plan do dvoru” was first given to the wealthy people of the village, then to the middle classes of the population, and finally to the poor. Its essence was that the owner and his family were evicted from the house wearing only shirts, and everything left there was taken by the village council. Expelled people were either dying of hunger or fleeing to Donbas…” Todos Osmachka wrote in the novel preface “Plan do dvoru,” published in 1951.

And in “Rotonda dushohubtsiv,” the author wrote about the ruthless mechanism of repression and terror. This work is a description of the hell from which Osmachka himself escaped.

At the beginning of July 1961 in Munich, right in the middle of the street, he was paralysed. The poet ended his life in a psychiatric hospital in the USA, where his friends sent him for treatment, hoping for his recovery. Ivan Bagriany was the last to see the sick artist “broken by paralysis and forgetful, stretched out in bed full-length, severe, like Dante. Forgotten and abandoned by everyone.” His earthly suffering ended on September 7, 1962. He was buried on the territory of St. Andrew Ukrainian cemetery (South Bound Brook), New Jersey.

The not shot one from “The Shot Renaissance”